Review ~ Luiff by Victoria Danann with a giveaway


WHEN HE COULDN'T FIND HER IN HIS WORLD, HE WENT ELSEWHERE.

First of a series of three novellas about the Brothers Cu Ahlee.

USA TODAY Bestselling author, Victoria Danann, wrote this series as a follow up, based on Moonlight, Best Vampire~Shifter Novel of 2013.

For a thousand years the highlander werewolves of Scotia have enjoyed the protection of the fae monarchy, but the straining population has forced them to adapt or die. Or move.

Liulf has spent centuries waiting for a true mating while others settled for comfortable compatibility. When he emerged as the new alpha, little did he know he'd find her when he leads his pack to a new world. 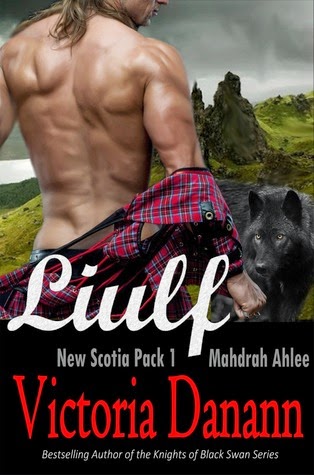 What reviewers are saying about Liulf.

"Victoria Danann has done it once again. I could not put this down until I was finished. It moved along at an amazing pace that was just perfect, the characters will grab you and you cannot help but fall in love with them and the story. Wow, this is an amazing read."- Joy Whiteside

"I got so lost in Luilf's world I forgot mine." - Pam James

"...fulfills that hunky shifter kilt hunger from the get go." - Nelta Mathias Baldwin

"As always Victoria Danann hits it out of the ball park with another amazing story." - Bobbi Kinion

Liulf squatted on the castle parapet with his back to the sound of the ocean crashing against Girnigoe’s black craig cliffs. If he let himself think about the damp cold or the January wind that tried to penetrate flesh and bone, he’d start to shiver in a way that would rack his whole body…. So he’d learned to focus on other things. Looking east, over the land he loved, he felt a sense of pride and history. And memory. In his slightly less than four hundred years, he’d covered every inch of pack territory in wolf form and much of it in biped form as well. He knew he was blessed with good things, but that didn’t fill the underlying emptiness that he couldn’t quite pinpoint. Lack of purpose maybe. There wasn’t much satisfaction in guarding a border without an aggressor.

That very day a wolf had said it was easy for Liulf to make reckless choices because he didn’t have a mate. Liulf had kept his face passive, but inside the words had stung. It wasn’t as if he could control destiny. What Lycan didn’t want to find his mate? Well, perhaps Conn would prefer to be a bachelor wolf forever.

It was true that Liulf could have settled for a bitch who was merely compatible, as most did. But he hadn’t because he knew there was more. There was mating that was, well, magical. He wouldn’t say so out loud because his brothers would never stop razzing him if he did. But he lived with a constant yearning that never subsided, spoken or not.

All the carousing in the world wouldn’t take the edge off his desire. And he should know. All he had to do was keep from cursing the Fates until they saw fit to gift him with the one. The one he knew was out there.

A snippet from an early review says: "This is a wonderful off shoot of that series (Knights of Black Swan). In MOONLIGHT, we learned that wolf shifters were having a rough time. Humans were spreading into their lands and using high powered weapons to kill them in wolf form. Towns and cities were destroying the wild areas."

This couldn't be more timely since we learned just 2 weeks ago that the planet has lost HALF of its wildlife in just the past 40 years. Certainly the wildness of werewolves is a metaphor for that part of us that longs for the call of Pan.


I really liked the Black Swan series. I can't say that I like this more but I like it as well. :D

I absolutely LOVE the accents! Hunky wolves with an accent. Arrrrrroooooooo! Makes my want to howl!

The imagery was well described as usual, I was unwilling and unable to stop reading from the first word to the last.

This was a very quick read with only 74 pages. :-( The good news is the other brothers will be getting stories too! There is more from these wolves coming! :-)

There is some steam (on the mild side), romance, hunktastic wolves with a foreign brogue, action, excitement, good characters, and everything you could want in a book of 74 pages. :D

If you like werewolves, accents, Victoria Danann's writing, or all of the above, don't dally! Get yourself a copy of Luilf and start reading! Time's a wastin!

I received an ecopy in exchange for my honest opinion. Other than wanting more pages, I thought it was fantastic!


Don't forget to enter the Comment Incentive Giveaway. It is a great chance to win a book you'd like to have! The link can be found at the top of the page.
Posted by Brenda Demko at 3:00 AM