GGMMMU ~ Author Hanna Martine is representing elementals with an interview

Hanna Martine writes sexy, character-driven romance novels in several different sub-genres. Sometimes there's magic (paranormal); sometimes there isn't (contemporary). She left a decade of office work in order to show her daughter what it means to go after your dream. She loves bar stools, the imaginary world, travel and her friends. Though she and her family live outside Chicago, her heart resides in Australia.

What exactly is an elemental? In my book series world, five different races command each of the five classic elements: water, fire, earth, air, and spirit. Nasty politics, fear, and mistrust separate the races. The waters are cocky and wealthy. The fires are fierce warriors. The airs are distant and twisted. The earths are secretive and elusive. And the spirits…well, no one really knows much about the spirits…deedle deedle do! :-) Sounds awesome! I can't wait to dive into this series.


What makes them different from a witch, wizard, fairy, or any other type of supernatural being? Their powers are very specific and solely tied to their elements. They do not learn spells and they can’t cross over into each other’s magic. Though they are markedly different from each other, they are all connected in the fact that they want to keep themselves hidden from Earth’s humans.


What do you envision their greatest characteristic, ability or power to be? The waters can literally turn themselves into their element. How freaking cool is that?! They can transform into water and roll themselves over the ground, or evaporate into mist and travel on the wind.


The airs can manipulate the atmosphere and fly, but perhaps their scariest trait is that they can twist suggestion into tendrils of wind and force it into your brain through your ear. Holy brainwashing!


The fires actually breathe flame. They can create and extinguish fire from the magic inside their bodies, and sometimes they are far too hot to touch (hubba hubba).


The earths travel through the ground, creating their bodies out of natural elements. They are the oldest beings on Earth, and can choose to evolve into a human. (I don’t know about you, but I’d like to ask several weird people I know to evolve…)


The spirits are also called Splitters because they can divide their bodies and spirits into two, identical beings. They can be in two places at once, and when they re-combine, they merge their memories. (How many of us wish we could do that? Imagine how many books I could write!)


Would you consider them to be good or bad? What is their greatest enemy? Do they have any allies? The Elementals live in murky shades of gray. They all possess admirable traits…but they all carry dark secrets, too. Their magic does not make them benevolent—it makes them egotistical and powerful, and with the exception of the earths, they use that power to get what they want. In that regard, their greatest enemies (outside of humans) are each other. As the series goes on, it comes about that they need to start seeing each other as their greatest allies.


Name any two creatures that you would love to see go toe to toe in a battle? You will be judged for creativity. ;-) Feel free to describe the battle. I can’t get out of my head the image of Pippin the Hobbit and Marvin the Paranoid Android from Hitchhiker’s Guide to the Galaxy just totally going at it. Stumpy bodies rolling around, flailing away with swords and weird space weapons, cracking jokes and complaining the whole time. That would be awwwwwwesome.

Hanna, what scares you? Water! Which is hilarious, considering I wrote whole books about a race that worships water. I just took my utter fear of it and wrote the opposite of what I felt.

What type of candy would you be apt to grab? Tootsie Rolls or Twix Give out for Halloween? SweeTarts or something not chocolate…so I don’t have a lot of leftover chocolate.

What do you think is the most mis-construed idea about elementals? That they are these hippie-dippie nice creatures who wear crystals and make pilgrimages to Glastonbury and have hairy armpits. They may be connected to earth’s elements, but they are strong and they can be wicked, and won’t hesitate to use their magic to better their own people. Ha! Looooove it! :P


What is your favorite type of monster to write about? Read about? I would really love to write about fairies, give them a Hanna Martine twist. I love to read anything that’s new—any kind of monster that has been reformatted into a refreshing concept. If I feel like a book is traveling down a road already paved, I lose interest quickly.

Thank you for letting me interrogate you. Also for sponsoring today's giveaway too!

Here's a peak at Liquid Lies, book one: 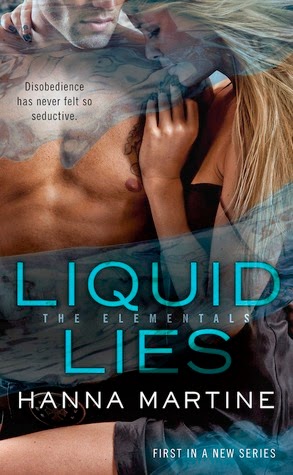 Magic is corporate America's best-kept secret, and Gwen Carroway is the best at selling it...

With her ability to pick up any language in an instant, Gwen Carroway is taking her family business global. As dutiful future leader of water elementals, she'll do anything to protect her people's secrets and bloodlines--including enter an arranged marriage. Inside, however, she yearns for the forbidden.

Reed is a mercenary addicted to the money and adrenaline rush of his work. After he inadvertently saves Gwen's life, he ignites her taboo desire for men without magic--and with bodies of gods. Just as things heat up, Reed discovers that Gwen is exactly who he's been hired to kidnap. He resolves to put work before lust, yet her luscious beauty and fiery spirit unravel him...

But there is a terrible truth behind Gwen's family business--and now, caught between the kinsmen she no longer trusts and an enemy bent on vengeance, the only ally she has is her abductor..

The series continues with the other elements!

Don't forget to enter the Comment Incentive Giveaway. It is a great chance to win a book you'd like to have! The link can be found at the top of the page.
Posted by Brenda Demko at 6:13 AM