Representing beings with unique talents is W. J. May, author the Chronicles of Kerrigan series and many other great books 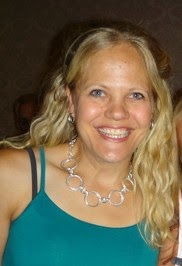 Wanita May grew up in the fruit belt of Ontario - St.Catharines. Crazy-happy childhood, she always has had a vivid imagination and loads of energy.

The youngest of six -- four older brothers, and a sister -- taught her at a young age to be competitive in all aspects of life.

At sixteen, she began competing in athletics (track and field) and before she turned seventeen, she was representing Canada in high jump. She continued to compete, breaking Canada's JR High Jump record (1.92m - 6' 3 1/2" for those metric-ly challenged). She attented University of Toronto, and Kansas State University - winning CIAU's and becoming All-American 6x - NCAA Indoors Runner Up + more.

But you're not interested in her athletic career - unless of course you're curious to know she stands 1.70m (5'7") and has jumped 20cm over her head on more than one occassion. She's represented Canada at the World Championships, World Jrs., won Francophone Games, and loved every minute of every competition. From the grueling workouts, the crazy weights she lifted on her back, the days she thought her lungs were going to spit out of her mouth for lack of oxygen, the travelling around the world and the opportunity to read - her favourite past time.

Wanita and her husband now run an online business, dealing in antiques and collectables - particularly jewelry and porcelain.

After her father passed away in 2009, from a six-year battle with cancer (which she still believes he won the fight against), she began to write again. A passion she'd loved for years, but realized life was too short to keep putting it off.

She is currently represented by Dawn Dowdle of Blue Ridge Literary Agency. Wanita is a writer of Young Adult, Fantasy Fiction and where ever else her little muses take her.

And now her representation of Rae from her Chronicles Of Kerrigan series:

How would you describe her powers or type of being? Definitely unique/special abilities. Rae’s a completely normal human being, just happens to have this kick-ass tattoo that gives her supernatural powers. :-)
Her tattoo is a bit like a copy-cat ability. If someone else has a tattoo (they are referred to as tatu’s in the series), Rae is able to mimic it. Most tatu’s give you one ability, where Rae can copy them all! Pretty awesome supernatural talent if you ask me. LOL! I'd say that you were biased but I've read a couple of books from The Chronicles of Kerrigan and I think that Rae is pretty awesome too!


What do you envision her greatest characteristic, ability or power to be? Rae’s natural instinct. She doesn’t even realize it yet, but her brain processes stuff faster than she sees it and then her body reacts instantly. It’s a fantastic protective mechanism. Her worst? Her worst would be her inability to trust anyone. She’s been lied to most her life without knowing and now has a hard time knowing who to trust and what to believe as true. It is tough to be her but that is part of why I am drawn to her character. She is so strong despite what she has too endure!


What makes your character different from a witch or wizard, or other supernatural being? She can’t do spells, but she can shape shift (has to mimic someone with a tatu of an animal). She’s like a modern day 007 secret agent!  Her father’s tatu was a warlock… I wonder if she’s going to be able to harness into that ability somehow? We’ll just have to wait and see!


What two creatures would you love to see go toe to toe in a battle? You will be judged for creativity. ;-) Feel free to describe the battle. Grollics, which are a very unique type of werewolf in my Hidden Secrets Saga, and a natural werewolf. The monster of the beast versus its predecessor. Survival of the fittest… or the smartest? Oooh Good choices! I have to say that I've read the first Hidden Secrets book and it was great too. :-)
Choose three of the following and tell us what your creature would do with them, make out of them, use them for or what reaction they would have to them: an apple, an gemstone, a silver chain, a fish, a rat, a deer, a toad, a piece of pizza heavily dosed with garlic, a flower, treasure belonging to someone else, a fire, a spider, a worm, a ball of string, a microphone and speakers, a wooden club, a mirror, a book, a cemetery, a boat, a moonlight bonfire, a sunny afternoon, a walk through the forest on an overcast day, a wooden stick, a Popsicle, a broom, a tree, a lost person, a baby, a body of water, a cross, a cage, wolfs bane, a rock, a rubber band, a chicken, a rabbit, a cave, rope, or a piece of candy. Rae finds out in book three, House of Cards, that she has an ability with fire. So she’s probably chose the moonlit bonfire with the fires to test her ability out. Being the smart cookie that she is, she’s also be close to the body of water in case things got out of hand. :0)
Which type of monster do you think would make the best love interest for your monster and why? The worst? The best and the worst are the same. Lol. According to tatu law, someone with a tatu is not allowed to date another tatued person. However, Rae would love to be with Devon, a boy with a Fennec fox tatu. Their love might feel right, but the repercussions could be deadly

What scares Rae? Her father. She always feels he’s reaching out of the grave to get her.


What scares me, the author?  Spider webs… I’ve learned to become quite the ninja person because of them lol. Eeeew! I feel your fear. I hate them too especially if you are out at night and wander into one. You have no idea if the spider is there or not. *shivers*

What is Rae most afraid of? Rae’s terrified of being caught by the other side. Or turning to the dark side… like Darth Vader!!! Sorry that I kind of repeated that one. Great job working around it. :-D

What type of candy would you be apt to grab? Give out for Halloween? Chocolate bars and bags of mini chips … they make the best goodies! And lots. I hate when kids come to a house and they only get one piece of candy. Give ‘em a break and fill the bag! lol I bet you are popular. No corn or toilet paper for your house on Halloween! :D

What is a least known trait about Rae and those like her? Their tattoos are not ink art. They keep their abilities secret from the real world!

What is your favorite type of monster to write about? Read about? I’m old school – vampires and werewolves :-)

Thank you Wanita for taking the time to answer my goofy questions and for sponsoring a giveaway as well. :-) You are an amazing author and a wonderful, fun, and friendly person.

FYI, folks the first book in The Chronicles of Kerrigan series, Rae Of Hope, is FREE! You have a chance to win the second book, Dark Nebula in the Unique Abilities giveaway! You can read my review of the first two books in the series here.

The first part of her Radium Halos series is free as well! If you want some good reading, pick them up. :-)

Click on any of the covers below to go to the Goodreads page for purchase links, blurbs, or just to add to your want to read list!