Regina Kyle knew she was destined to be an author when she won a writing contest at age ten with a touching tale about a squirrel and a nut pie. By day, she writes dry legal briefs, representing the state in criminal appeals. At night, she writes steamy romance with heart and humor.

A lover of all things theatrical, Regina lives on the Connecticut coast with her husband, teenaged daughter and two melodramatic cats. When she’s not writing, she’s most likely singing, reading, cooking or watching bad reality television. She’s a member of Romance Writers of America and treasurer of her local RWA chapter.

Regina was kind enough to guest post for me today! Thank you Regina. :D

Thanks so much for having me here at Crazy Four Books! Triple Threat is my first book, and this is my first blog tour. When you tell people you’re a writer – especially a romance writer – you get a ton of questions. One most common questions I’ve been asked is how I came up with the characters of Holly and Nick. For me, that was one of the most fun parts of writing Triple Threat. I’m a visual person, so I wanted to start with a clear image in my head of my hero and heroine. I sat down and started perusing pictures on the internet (a dangerous thing). The heroine was easy. In my head, to be honest, she’s kind of like me, but younger. Brown hair, green eyes, spunky. Very girl next door, pretty without being drop dead gorgeous. When I saw this picture of Maggie Gyllenhaal I knew I’d found my Holly. It perfectly captures Holly’s essence: sweet but at the same time feisty, brave, a real fighter who’s survived domestic violence but doesn’t see herself as a victim. 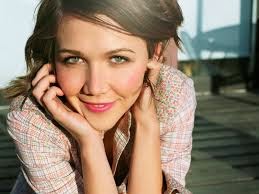 Nick was a little more elusive. I really didn’t have a set image of how he looked. I knew he was an action film star, so he’d be in good shape, for sure. And I knew he wanted to shed that image and take on more serious, dramatic roles. Then one day a friend posted a picture of Joe Mangianiello on her Facebook wall and I was like, woah. The slightly too-long, tousled hair. The piercing chocolate brown eyes. The sexily stubbled chin. And, oh yeah, all those gorgeous, sculpted muscles. I did a little reading up on Joe and I was floored with the similarities between him and Nick. 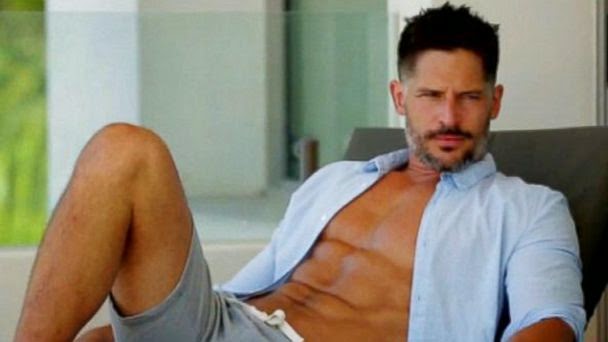 He’s best known for his beefcake roles in True Blood and Magic Mike, but he’s also a veteran of the stage, and has appeared in works by Shakespeare, Ibsen and Tennessee Williams. I even got to see him in Williams’ A Streetcar Named Desire last year, and he was amazing. It was kismet; Joe was Nick, and I had a physical manifestation for my hero. I found that I got to know my characters better as I wrote, layering more and more in about them as the process continued. I really grew to love Holly’s quick sense of humor and big, strong Nick’s sensitive side. I hope you will, too 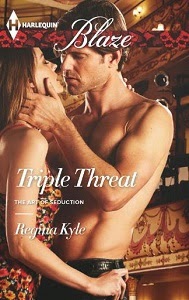 The Playwright: It’s emerging playwright Holly Nelson’s big break. Broadway. Having survived her traumatic marriage and divorce, Holly is now aiming for success, not love. And any naughty dreams about Nick Damone—the gorgeously dishy star who was her crush back in high school—must remain a fantasy.
The Star: For Nick, Broadway is a chance to go from big-screen-eye-candy to serious actor, and to explore the lust blazing between him and Holly. But life-threatening accidents will force a chain of events that could bring down the curtain on the whole production…or give Nick and Holly a chance to finish the sexy something that started fifteen years ago!

So what do you think?” Holly twirled around center stage, taking in the crown moldings, the gold filigree, the rich red of the heavy velvet house curtain. “Isn’t it beautiful?”
She’d fallen in love with the Rep in all its majesty when she was twelve and her parents brought the family to a production of Oklahoma! Noelle had been all about the big ballet sequence in the second act. Ivy had wanted to know why she couldn’t take pictures in the theater. Gabe had dissected the plot, pointing out every flaw. But Holly had sat in her plush cushioned seat, open-mouthed and stock-still, transfixed by it all—the music, the lights, the costumes, the sets—from the first downbeat to the last curtain call.
Even the audience members had fascinated her, in their varied and eclectic versions of theater dress-up. Now the Rep audience would see her words performed on that stage. Okay, so her Broadway dream had gone up in smoke. In some ways, being at the Rep was a lot more meaningful.
Why had it taken her so long to get back to the stage? She’d always felt at home there. Too bad she couldn’t leap right from that starstruck kid lip-synching with Ado Annie to this moment. No string of failed jobs. No Clark. No miscarriage.
“Yeah.” Nick’s voice brought her back to the present. “Beautiful.”
She stopped twirling to face him, hands on her hips. “You’re not even looking.”
“Oh, I’m looking, all right.” He leaned against the stage-left proscenium arch, his eyes raking her up and down.
“At the theater, hot stuff.” She stuck her tongue out at him, laughing. “I can’t believe they used to keep highway equipment in here.”
“They did?”
“This place started life as a vaudeville house. When that died out, the Department of Transportation used it for storage. The condition of the building got so bad the state wanted to tear it down until a group of preservationists bought it for a dollar. It took them four years to restore, but I think the result was worth it.” She did another quick turn. “Don’t you?”
“Don’t I what?”
“Have you heard a word I’ve said?”
“Not really. I was too distracted by the whole Marilyn Monroe thing going on with your skirt.” He made a circle with his finger. “Spin around again.”
“You have a one-track mind.”
“Name one guy who doesn’t.”
“Mr. Spock.”
“He’s a fictional character. And even he’d be tempted by you in that outfit.” He gave her a scorching look that made her knees wobble. “Did you know I can see your nipples in that shirt?”
She looked down and pulled at her blouse. “Cannot.”
“Can too. Are you sure you’re wearing a bra?”
She couldn’t help but laugh at his persistence. The sheer force of his will—and his charm—was overwhelming. “You’re hopeless.”
“More like hopeful.” He crossed the stage and came up behind her. His hands settled on her waist, his mouth at her ear. “How much time do we have before lunch?”
“I don’t know.” She tilted her head back so he could kiss her neck. “Another half an hour or so. Ethan said he’d be done around two. Why?”
“Ever make out onstage?” He spun her in his arms so they were facing each other and lifted her off her feet. The start of his erection pressed against her belly.
“No,” she said on a breathless laugh, her hands coming up to grip his shoulders. “But I’m sure you have.”
“Only when it was scripted.” He cupped her bottom, holding her tight. “This would be my first attempt at improvisation.”


This sounds like a romance with a side of laughs. I have it at the top of my TBR list.


Don't forget to enter the Comment Incentive Giveaway. It is a great chance to win a book you'd like to have! The link can be found at the top of the page
Posted by Brenda Demko at 12:15 AM