Review ~ What to Do with a Bad Boy by Marie Harte

Caffeine addict, boy referee, and romance aficionado, New York Times and USA Today bestselling author MARIE HARTE is a confessed bibliophile and devotee of action movies. Whether hiking in Central Oregon, biking around town, or hanging at the local tea shop, she’s constantly plotting to give everyone a happily ever after. Visit www.marieharte.com and fall in love. 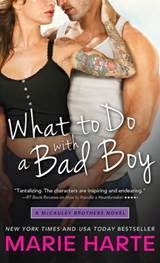 What to Do with a Bad Boy

WHAT IS WITH MIKE McCAULEY?

Every time Delilah Webster runs into Mike McCauley, he practically bites her head off. The rough-and-tumble contractor clearly has baggage. Del has her own emotional scars and knows she’s better off keeping her distance, but Mike’s temptation in jeans and a T-shirt and she’s always been good with her hands…

There’s something about the strong-willed mechanic that sets Mike’s motor running—and scares the hell out of him. Mike has loved and lost and will never hurt like that again, even if that means walking away from a woman who makes him feel alive for the first time in years.

When a simple kiss turns hot and heavy, Mike discovers he can’t stay away, no matter how certain he is they’re destined to crash and burn…

He leaned down, so that his nose was all but touching hers. “Sweetheart, you couldn’t handle what I’m really made of.”
Stupid Del wanted to drag his stubborn mouth closer for the kiss she could all but taste. From the look in his eyes, he wanted the same. Mike might not like her much, but the man wanted her. She could feel the chemistry between them, and it burned.
Self-preservation reared its head, and she ducked under him and hustled to the door leading to the hall. She opened it and waited. “Don’t let it hit you in the ass, Mike.”
He chuckled as he sauntered to join her. “You’ll watch what you say around Colin?”
“Yep. When I see him Wednesday night, I promise to call you a buttwipe instead of an asshole. Fair?”
He sighed. “Guess it’ll have to do. For now.” To her shock, he dragged a rough finger down her exposed neck. “Nice hair, by the way. I like the braids pulled back. Shows off your pretty neck. No tats here, sweetness?”
She didn’t know what to say, frozen by the combustible lust and confusion drowning her system.
He stared into her eyes again, gave a satisfied smile, then left.
She watched his fine ass leave the building, heard a few choice remarks from the guys in the garage who also watched him leave, and yelled at them to get back to work. Then she slammed into her office and plopped her butt in her chair, staring without seeing at the mess on her desk.
She rubbed her neck over the spot he’d touched and tried to be madder about what he’d done. What he’d called her.
Sweetness?

Marie Harte has characters that will have you eating out of the palm of their hands. They are very family oriented and some are even "nice". I loved, loved, LOVED the sass, ribbing, and playful banter that goes on between them. It was by far my favorite part.

Just because the characters and their playfulness with each other was my favorite, that doesn't mean that the rest was lacking in anyway. It just means that the characters were sooo awesome!

The plot was fun and flirty though it also had some sad parts too. There was a little of every emotion between the pages of this book. I was angry a time or two and I laughed A LOT!

Our hero in this one is Mike, eldest of four brothers, widowed single father and all around nice guy. The leading lady is Del. She is a tattooed, single mechanic with a bit of a foul mouth.

There was plenty of steamy, get you hot and bothered scenes. Whoooeeee! ;-) I loved Del's nicknames for Mike, especially, when she dubbed him MC. ;-) You'll have to use your imagination or read it soon to find out what it means. It is awesome.

I liked both of our main characters but for me the star was Mike's son Collin. He was precious, charming, sneaky and precocious.

In addition to great characters and steam, you will have plenty of romance as well.

The length of the book was just right, the pace was consistent and fluid, and the content was well written, charming, engaging and wholly enjoyable.

It could easily stand alone but you will want to read the others too!

I received an ecopy from NetGalley in exchange for my honest opinion. It was great!