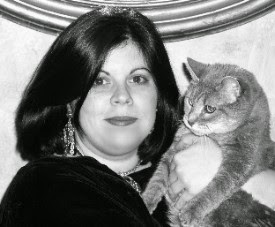 Bestselling author Angelique Armae is a native New Yorker who’s as zany as the city she grew up in. As a child her favorite toy was Emerald The Witch, a small doll with green eyes, green hair and purple skin.

Miss Armae’s books and novellas have garnered numerous awards and nominations, including the Sapphire Award, P.E.A.R.L. Award and Word
Weaving Award. Her books have also been featured on Midwest Book Review’s Book Watch TV. Angelique’s first novel, COME THE NIGHT, made
Fictionwise’s Best of the Best list, rounding out the top five best selling dark fantasy books of the year. SHADOWS OF THE SOUL was an
Amazon Kindle bestseller.

Aside from writing, Angelique also dabbles in digital art. She is the recipient and two time nominee of the Dream Realm Award for best cover art.

You can find more info on her book after the interview. :-)

She has a greed to represent fallen angels with the following interview:

Would you consider your angels to be good or bad? What is their greatest enemy? Do they have any allies? In my angel novels, my monsters tend to be demons and similar Hell-bred creatures.  In some instances, these monsters are bad due to their environment.  Their greatest enemy are the angels of Paradise and their human or half-human counterparts who fight against Lucifer and his minions.  As for allies, my demons can't really count on any soul, not even Lucifer.  For the most part, Hell in my books is a world where each individual is fighting alone.   Everyone is out to get everyone else.  There are some instances of unified battles, but not all the time.

Why do think angels are most often portrayed as male? I'm not sure why there are more male angels in books and movies rather than female ones.  Male angels definitely make sexy, hunky heroes.

Name any two creatures that you would love to see go toe to toe in a battle? You will be judged for creativity. ;-) Feel free to describe the battle. I'd love to see Lucifer battle himself, his own dark side.  That would be an interesting fight.  In my books he's already at war with himself, so that battle will eventually be written in the series.

Choose three of the following and tell us what your creature would do with them, make out of them, use them for or what reaction they would have to them: an apple, an gemstone, a silver chain, a fish, a rat, a deer, a toad, a piece of pizza heavily dosed with garlic, a flower, treasure belonging to someone else, fire, a spider, a worm, a ball of string, a microphone and speakers, a wooden club, a mirror, a book, a cemetery, a boat, a moonlight bonfire, a sunny afternoon, a walk through the forest on an overcast day, a wooden stick, a Popsicle, a broom, a tree, a lost person, a baby, a body of water, a cross, a cage, wolfs bane, a rock, a rubber band, a chicken, a rabbit, a cave, rope, or a piece of candy. An apple – Lucifer can't touch apples in my series. So, he's desperate to create a version of the fruit he can eat.  It represents everything he lost in his fall from grace. He's constantly trying to create the perfect fruit that won't wither at his touch.

A gemstone – Nicolai Valentine, my half-human, half-fallen angel.  He picked out a ruby with his little boys for a gift for his wife Isabel.  It was the last thing he did with his small sons before they were slaughtered by Hell's Locust Army.  In my upcoming book, the sequel to Shadows of the Soul, Nic finally decides to give Isabel (his soulmate) the necklace he purchased with his sons.  It's something he's carried for two centuries.  It brings him pain as much as it brings him joy at the thought of his sons.  He and Isabel fight their grief together and the sequel will force them to confront their pain.

A moonlight bonfire – my characters Isabel and Nicolai Valentine – they'd love to have a nice romantic night in the Fall, before it gets too cold, telling great stories around a bonfire.  Then, when all their guests leave, Nic would get quite passionate with Isabel and make love to her under the stars and moon.

Which type of monster do you think would make the best love interest for your monster and why? The worst? The best love interest also happens to be the worst for Nicolai Valentine.  His soulmate is Isabel Godfroie Heart, a human immortal trained in angelic warfare.  She's a demon hunter and thanks to Nic's Hell-bred soul, the creatures who constantly hunt them are forever keeping Isabel and Nic on alert.  They're both each others best protector and defender, while also each others greatest threat.

What scares you? Not being able to figure out what comes next in my current writing project.

What is your monster most afraid of? What makes it happy? Nic's most afraid of not being able to protect his family, especially his wife.  He's already lost their sons, he doesn't want to lose anyone else who's dear to him.  Being with his family makes Nic happy. He also loves his new Hellhound, a very curious and rambunctous puppy. And in my upcoming sequel, The Bride Wore Demon Dust, a Hellcat kitten is about to invade their home.

What type of candy would you be apt to grab? Give out for Halloween? Mallow Cups and Candy Corn.  I love them both.

What is your monster’s favorite meal? My Valentine brothers – all half-human, half-fallen angel (with the exception of Sebastian who is a triplicate soul also being part vampire) love all kinds of food, especially desserts they can share with their soulmates in very sexy ways.

What is the most bizarre name for an angel that you can think of? It's not bizarre, but I have one Valentine family member named Zenobius who will be introduced later in the series.

What do you think is the most mis-construed idea about angels? The idea that they're all white-winged with fluffy feathers is a huge misconception.  Angels are fierce warriors.

What is a least known trait about them? They don't have a free will like humans do, but they do have an angelic version of will that makes them responsible for their own actions.

What is your favorite type of monster to write about? Read about? Obviously, I love angels. But I'm also a huge fan of vampires, dragons, gargoyles and wolf-shifters.

Thank you for undertaking the task of representing your angels for us. :-)

Also, thanks for donating a prize for today's giveaway! :D 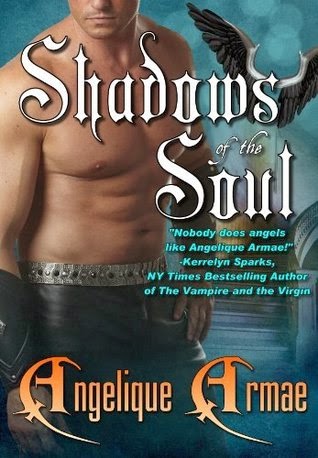 SHADOWS OF THE SOUL by Angelique Armae

When Hell’s sexiest bad boy–Nicolai Valentine–defied Lucifer, he lost
everything.

When the two meet…

A haunting past is reborn…

Isabel Godfroie Heart is a Paradisian Scholar-an immortal human trained
in the ways of Heaven and Hell-who’s suffering from memory loss. During
her last battle, a dark force erased specific portions of her past life
memories. Now she remembers little of times past, save for the fact
she’s a demon slayer mentored by the archangel Gabriel. When ordered to
a new post to help translate a volume of ancient text from a forbidden
verse, Isabel is forced to work with the dark prince Nicolai Valentine,
a soul who may or may not be responsible for her memory loss. If only
she didn’t find the tempting creature so hard to resist…

Born to a fallen angel and a mortal mother, Nicolai Valentine is a
prince of the Grigorcov, the children of the fallen sons of God.
Searching for the lost chalice that will save his kin from eternal
damnation, Nicky unknowingly unleashes the Hadean Virus, a dark entity
targeting members of the Grigorcov. Now the entity has been unleashed on
man’s world and Nicky’s in a race against time to find the antidote that
will stop this deadly parasite. But in order to keep the Hadean virus
from attacking again, Nicolai must enlist the help of Isabel Godfroie
Heart, the Paradisian Scholar he was unable to save from the wrath of
Hell centuries ago…

Don't forget to enter the Comment Incentive Giveaway. It is a great chance to win a book you'd like to have! The link can be found at the top of the page.
Posted by Brenda Demko at 12:45 AM