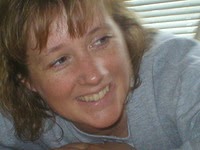 I confess...I'm a bit of a dork, with a quirky and sometimes dark personality, though not as dark as some. I love the outdoors and nature, and photographing normal, everyday things from different and abnormal angles. One of my photos has been published in the political humor book Red Dog/Blue Dog by Chuck Sambuchino.

Legally, my name is Susan Barton, but I write under the pen name Su Williams (my maiden name). I am a 48 year old mother of 4, Sarah, Josiah, Jack and Aundraic. I'm married to Ben and we have 2 cats, a garder snake, a crested gecko named Reid (like in Criminal Minds) and a beagle, Dyson (yes like the vacuum) who is my favorite teddy puppy.

I was born in Little Rock, AK. My daddy was military and my parents finally decided that Spokane, WA was the place for us and this is where I've lived since I was about 10.

I always wrote special poems for family birthdays, and began to write short stories in Jr. High. Many years later after a self-esteem building program of hypnosis, and reading Twilight, I was inspired. I said, "I could do that." So I did.

Can you tell us what a dream weaver is or does? We are the Onar Caphar (Dream Writers in ancient Greek). Though in more recent years, we’ve begun to call ourselves Dream Weavers, like the song. We are descended from the Nephilim, the ancient race birthed from relations between angels and human women. We are able to read and manipulate memories and dreams, and though it may seem like mind reading, we are only able to read a thought once it becomes a memory…which, essentially, is almost immediate.

What do you envision your greatest characteristic, ability or power to be? The Caphar are as wide ranging in personality as any other human, though our life expectancy is up to 10 times that of a normal human. By far, most Weavers would claim their eidetic memory, the ability to remember everything we see, hear, feel…to be our greatest asset. It allows us to understand and empathize with the mortals we come in contact with. Your worst? Our worst characteristic? Some might say the fact that we must be sustained on the brainwaves of a sleeping human host, much like fictional vampires must live on their life’s blood. However, there are a rare few of us that create and enhance nightmares in the human mind. These nightmares cause a different kind of brain wave that produces a ‘high’ when consumed by the Weaver. We call these Weavers the Rephaim (or Nightmare Wraith), and once a Weaver crosses this line of evil, vile conduct there is no return.

Would you consider yourself to be good or bad? In general, the Caphar are good people. But again like humans there is a wide variety of personalities. What one of us would see as wrong might not be wrong to another. Only when one of us becomes Rephaim can we be considered truly evil. These Rephaim (or Nightmare Wraith) care nothing for the humans, or other Caphar, that they torment, even though their attacks often lead to insanity, death or suicide.

What is a least known trait about you? The Caphar are extremely little-known. While many tales are told of vampires, zombies and werewolves, the Weaver’s existence is revealed to few…and even then, they can just erase the memories from people’s minds.

Name any two creatures that you would love to see go toe to toe in a battle? You will be judged for creativity. ;-) Feel free to describe the battle. I would challenge any creature to go up against the Caphar, whether they are Weavers or Wraith. They don’t need weapons or skill just access to your mind so they can pillage and plunder. And they are also able to phase, so pinning one down is a challenge in itself. Some can memoryprint…meaning they can pick up an object pick up the memories imprinted on it. All they have to do is pick up any kind of weapon and print the memories of how to use it…so their arsenal is virtually limitless. Here’s a battle excerpt from my second book in the Dream Weaver Trilogy, Rock Star.

Vicious snarls and roars of anger erupted when a strike hit home. The fray conjured images of pit bull and cock fights; feral growls, slavering mouths, dripping blood. I thumbed the stake, wondered if I really could thrust its point into the heart of another being, no matter how evil.

Nick and Thomas slammed to halt at my feet, and I leapt out the way of slashing blades. Blood drained freely down Nick’s face, blinding his right eye. Thomas lashed his hand out of the melee and grabbed my ankle. With a vicious yank, he dragged me to the ground and into the skirmish. Images of Nick’s nightmares were shoved through my brain. Violence and blood spewed into my heart. In that moment, I understood that the brutality of the battle was not purely physical. The two were warring with memories as well; real, conjured and manipulated. Each flooded the other with images filled with loathing, designed to distract, intended to destroy from within.
The image of me with my throat slit, gaping and gushing poured through Nick’s mind. I felt his mind slam shut in defiance against the image, felt how the grief that the mere thought of my death ripped at his heart. My mind conjured pictures of happy puppies to assuage his churning emotions, and sent a soothing salve to his pain. With renewed vigor, he assailed Thomas with withering memory contortions of his own.

Choose three of the following and tell us what your creature would do with them, make out of them, use them for or what reaction they would have to them: an apple, a gemstone, a silver chain, a fish, a rat, a deer, a toad, a piece of pizza heavily dosed with garlic, a flower, treasure belonging to someone else, fire, a spider, a worm, a ball of string, a microphone and speakers, a wooden club, a mirror, a book, a cemetery, a boat, a moonlight bonfire, a sunny afternoon, a walk through the forest on an overcast day, a wooden stick, a Popsicle, a broom, a tree, a lost person, a baby, a body of water, a cross, a cage, wolfs bane, a rock, a rubber band, a chicken, a rabbit, a cave, rope, or a piece of candy. A Rephaim would take the rat and conjure nightmares of it clawing its way up your leg and gnawing your flesh while you lay immobile and unable to escape the torture. He would walk you through a pitch black cemetery and raise the disintegrating bodies from the earth to chase you until your heart gave out. He’d use a rope to bind you then turn it into python to squeeze the breath from your lungs.

Which type of monster do you think would make the best love interest for your monster and why? Most Rephaim love only themselves and the intoxication of nightmares. It is a rare Wraith that finds love at all and even then, she will fall to his torments.

What is you most afraid of? What makes them happy? The Rephaim fear very little as they can invoke the most gruesome night terrors and ravage the minds anyone unfortunate enough to come across them. Death and destruction, terror and bedlam and insanity bring glee to the Wraith’s heart.

What is your favorite meal? The accelerated delta brain waves their nightmares have invoked in the minds of their victims.

Su, what is your favorite type of monster to write about? Read about? Right now, I’m going through a zombie phase and am working on my 4th full length novel Devo: A Devolution Zombie Story. I guess I just like how tough all the survivors have to be to endure the loss of so much and continue on facing their nightmares that slaver and shamble after them.

What type of candy would you be apt to give out for Halloween? Chocolate!!!! Is there anything else??? Snickers, and Almond Joy and Hershey’s minis and KitKats and….oh my mouth is watering just thinking of it!!

Below you will find more information about the characters that she represents, where to find them and what their story is about: 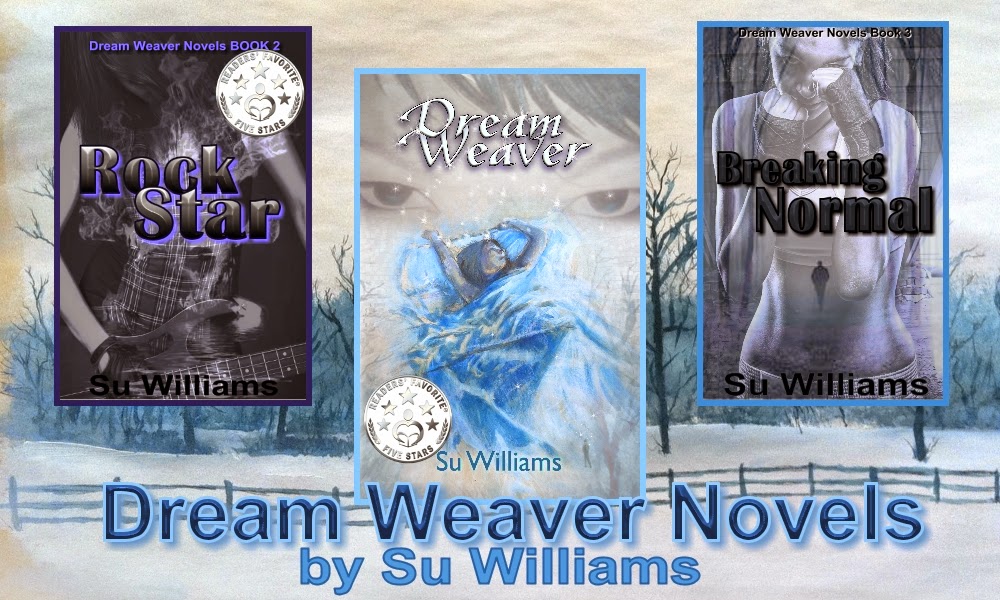 Click on the titles below to go to their Goodreads page for more info. Or You can find the link below their blub to purchase them.

DREAM WEAVER Nickolas Benedetti is a Dream Weaver; an ancient, arcane and almost immortal race with the power to command memories and dreams. Nick plunges heart-first into Emari Sweet's tragedy-torn life to rescue her from the night terrors that stalk her after the death of her parents and brutal assault. But, can he save her from the living, breathing nightmares that have followed him to her doorstep? AND… Purchase it here from Amazon or get a print book from CreateSpace.

ROCK STAR Emari lives the life of a rock star in an elaborate memory weave by Dream Weaver Sabre James; and faces her own mortality at the hands of Sabre's longtime nemesis bent on vengeance for the death of his beloved sister. Immortality and magic unearth treasures and secrets that some would rather keep buried. And the biggest secret of all could destroy everything. Purchase it here from Amazon or get a print copy from CreateSpace.

BREAKING NORMAL The story of Dream Weavers Emari Sweet, Nickolas Benedetti and Sabre James brings the terror to a boil and spills over as their arch nemesis, Thomas, the Nightmare Wraith draws Em's friends, Jesse and Ivy into the feud, and lures her pup, Eddyson into peril.

The only thing Em wants is a ‘normal’ life, but the magic and mayhem of her new life has spiraled her entire world out of control. Does ‘normal’ even exist for her anymore? She struggles through the stages of grief, and her anger at Nick’s betrayal. Rage embitters her heart, and she’s not sure she will  ever be able to trust this man she’s grown to love.

Using her new Caphar gifts and her magical spider Ari, Em works with her friend/cop Molly and Spokane Police to solve cold cases, and memoryprint new ones. Emari hones her body and abilities to become a daunting challenger in the battle against the malevolent Rephaim. Purchase it here from Amazon or get a print copy from CreateSpace. 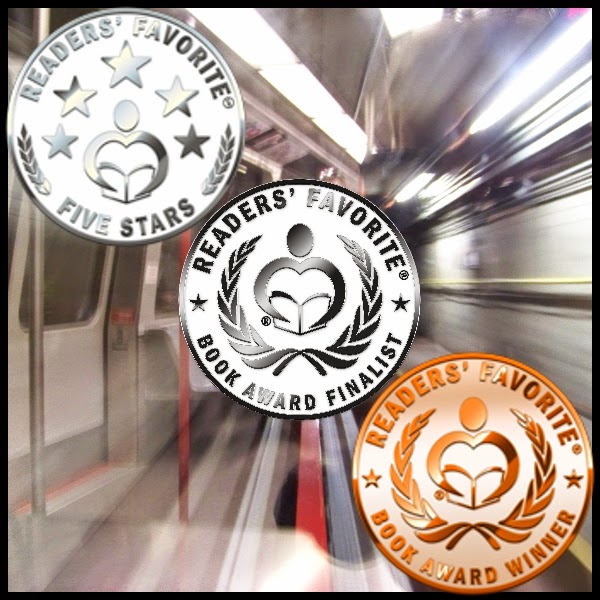 Su graciously donated one of each of her books for a giveaway prize! Thank you Su!


Don't forget to enter the Comment Incentive Giveaway. It is a great chance to win a book you'd like to have! The link can be found at the top of the page.
Posted by Brenda Demko at 12:15 AM