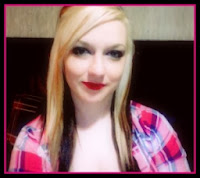 KayCee is a 24 year old self-published author from Cleveland, Ohio.

KayCee has always loved reading. After a re-occurring dream she decided to try writing about it. She wrote the first installment of Twisted when she was 20.

“I kept having this dream about these twins, and then I just decided to run with it. I wrote the beginning, the end, and then filled in the middle.”

KayCee finished the book in 8 months and then decided to share the book online. After seeing people get interested in the book and the characters, she decided to write another book and turn Twisted into a series.

KayCee has finished four novels in the Twisted series and is currently working on the fifth book.

Cayden Rivers wants nothing more than to be normal, but we don’t always get what we want. For years he has been hiding a secret, afraid of being labeled a “freak”. Every day he goes to school, plays football, spends time with his girlfriend, and helps carry his drunken adopted father to bed. Nobody knows the truth about his unnatural speed and strength, including his life-long friend Camilla.

Suddenly, four strangers enter Cayden’s life, and not only do they know his secret, they also have one of their own. With their help, Cayden discovers there is more to his power, something much more dangerous. Something other people will kill to possess.

Camilla wishes her parents were around more. She gets lonely sleeping in her big empty house night after night. Sure, she has all the money she could ever need, but the only person who is there for her is Cayden. He has his own family and a girlfriend who takes up most of his time, so Camilla knows he won’t be there for her forever, and recently he’s been acting really strange.

Will Cayden be able to keep his secret and his friendship with Camilla, or will his new found power destroy everything, including his own life?

Switching between Cayden and Camilla's point of view, Twisted will leave you aching for more. 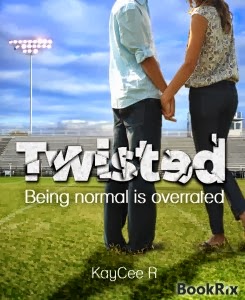 He pulled my face back to his and started kissing me again. It wasn't how I had always pictured it, the few times that I pictured it at all. I always thought if we ever kissed it would be full of passion, but he kissed me powerfully. Masterfully. I wanted to pull away and really tell him off, but what he was doing felt so nice…

Twisted was an easy and relaxing read. It is age appropriate for everyone as there is a lack of foul language (Thank you!). You are safe from steamy scenes as well.

Cayden is the main character as he is the "special" one. However the point of view jumps back and forth between his and Camilla's. She is his best friend.

It took a little while to warm up to the meat of the story but once it got going, I enjoyed it. Cayden had been adopted as a baby and the only thing he has from his birth parents is a pendant.

I was a little disappointed that we didn't get more answers about Cayden's past and  I'm anxious to find out what the future holds for him and those he cares about.

There was some mild romance, paranormal elements, and some suspense as well as a bunch of really likable characters in Twisted.

If you like YA paranormal books, you should try this one. I enjoyed it and no-one twisted my arm to read it. :-)

I received an ecopy in exchange for my honest opinion. I thought it was a good read for teens and fans of YA books.

Email ThisBlogThis!Share to TwitterShare to FacebookShare to Pinterest
Labels: giveaway, I Am A Reader, review