Character guest post by the author of LUTHECKER, Keith Domingue 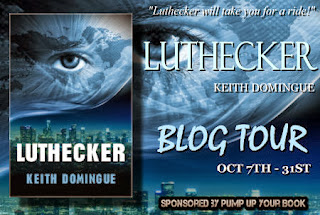 Keith Domingue has written a character guest post for me today. :-)

My name is Alex…

And the first thing I knew about him was that he wasn’t from here. It wasn’t because of his race, because in Los Angles there’s every kind. It was his clothes. The style, the thread origin, the stain pattern, even the smell all indicated to me that he hadn’t been in the states for very long. That was the first clue.

His forehead had beads of sweat, and his movements were small, erratic, and unsure. He was nervous.

It was at that point I wanted to stop. I wanted to stop cataloging every nuance of behavior and detail about this man who I’ve never met, but simply saw standing on a street corner, but I couldn’t stop. Not now. The patterns were already in my head, the conclusion regarding his choices already formulated. He was going to leave a pipe bomb in the L.A. Metro, and he was going to do it tonight. I was sure of it. It was a mathematical certainty.

What people sense but do not grasp is that the universe consists of countless patterns, some that intersect and some that do not, but all of which are related.

What I can do, is see those patterns. And how they relate to one another. Particularly when those patterns involve human behavior.

Most people realize a man carrying a shotgun through a shopping mall is a threat. But few are capable of seeing, or more accurately wanting to see, the anger in the eyes, the resignation in the posture, the degradation in hygiene, the increased social detachment, the growing frustration brought on by the constant reinforcement of a negative belief system that along with countless details, doomed this man’s fate from the beginning.

It’s all just simple mathematics. And I can do the math, see if all very clearly, before the man every picks up the gun. It’s not perfect. It’s not perfect because occasionally, people can change. But the more dogmatic the life, the easier it is for me. And most people are set in their ways before the age of thirty.

But none of that answers the question in front of me right now. Do I stop this man, from doing what I know he is about to do? Do I report him to the authorities?

Because once I do, once I step into the Momentum, it changes everything. For everyone. And even I don’t know what happens after that…

Keith Domingue is a screenwriter living in Los Angeles, and has written scripts for MGM Studios, Dimension Films, and Village Roadshow Pictures. His first original screenplay ONE THIRD, is being produced by Safady Entertainment and Lions Gate Films, and is scheduled to begin production in 2014. LUTHECKER is his first novel. Connect with him on Facebook. 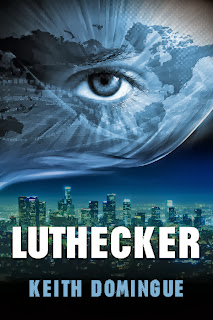 Purchase it from: Amazon

ALEX LUTHECKER lives off of the grid. He prefers the comfort of the night. He avoids the crowded and chaotic daylight hours, because the relentless anxieties of the multitudes overwhelm him. This is because Alex has a rare gift. He is a pattern reader. Patterns in nature, patterns in social groups, patterns in individual behavior, he can recognize them all. With one conversation, he knows all of your secrets. He can tell you exactly who you are. He can tell you exactly how your life is going to end.

NICOLE ELLIS works in the energy business. She trades futures in the lifeblood of civilization: crude oil. With the help of her patented pattern recognition software, PHOEBE, she has the uncanny ability to predict trends in oil production and consumption. And at the tender age of twenty-five, she is recognized as one of the best in the business, with the bank account to show for it.

For Nicole, who grew up with nothing, the world is hers.

RICHARD BROWN was a highly respected intelligence officer during both Gulf Wars. He oversaw rendition squads, making sure that his interrogators didn’t cross the line into torture, and if they did, that no one would ever be the wiser. The only thing that mattered to the government was that Brown always got his man. His track record of success allowed his move into the private sector, eventually heading the corporate entity known as Coalition Properties, the largest military contractor in U.S. history.

For Brown, the commodity he trades and sells is power.

A terrorist attack on a Saudi oil refinery sets the paths of all three on a collision course, an encounter that threatens to upset the balance of power in the world. Alex must learn to forge relationships and become a leader in order to save the lives of not only himself and Nicole, but also those of his loose band of allies, as he becomes one of the most sought after fugitives in history.