It’s been six months since Kaley’s fiancé called things off, disappearing with barely an explanation, and the thought of spending Christmas alone is causing feelings of hurt and loneliness to ruin her holiday cheer.  Tall, dark, quiet, and ever the gentleman, her next door neighbor has been sneaking into her thoughts more often than not lately.  When she decides to ask him to go to a Christmas party on a spur of the moment whim, she has no idea she’s about to unleash a whole new dimension on her usually normal life.

Born in Quelondain, Sean is no stranger to a broken heart.  Though it’s been years since the one he loved fated to his best friend, the ache is still present and crossing over to the other world hasn’t helped like he’d hoped it would.  When Kaley asks him to accompany her to a Christmas party his gut tells him to stay away.  It’s not that he isn’t attracted or tempted, but how is he supposed to explain his past and what he is.  Of course, it’s just one evening, right?  What could possibly happen in one night? 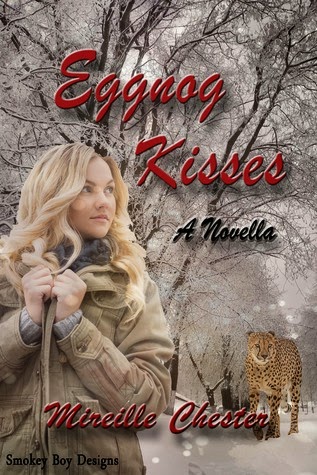 She managed to get into her apartment while keeping a curious JJ from escaping.  The fluffy white cat purred and rubbed himself against her ankles.

“Hey, bud.  Did you miss me?”  Kaley went to the cupboard and pulled out a few Whiskas treats for him.  She looked around her small apartment and suddenly, she didn’t want to be there alone.  “I’ll be right back.”

She didn’t bother putting on shoes before closing her door behind her.  Sean answered his door and smiled at the sight of her.

“What can I do for you, neighbor?”

“So, what brings you over here?”

She took a deep breath and blew it out of her nose.  “It’s stupid, I know.”

Sean shook his head.  “Not at all.  I know the feeling.  I wasn’t engaged, mind you, but my first holiday after my girlfriend left I was a wreck.  We’d been together four years.”

He cocked his head to the side.  “I was just about to have a rum and eggnog.  Want one?”

She was tempted to turn him down, but curiosity got the better of her.  “Sure.”

He held the door opened wider so she could get in and directed her to the couch.  “It was your typical breakup.  We were young and life had other plans for us.”

She watched as he mixed the drinks and brought them over.  “Thanks.”  She took a sip and he took a long swallow of his drink.  “Anyway, it wrecked me when she left.”

Kaley frowned.  “That worked?  It helped?”

“Not even a little bit.  The only thing that helps is time.”

She couldn’t help the depressed look that took over her face.  “Five years, eh?”

Sean laughed.  “It’s been that long, but it didn’t take that long.  I’ve had a few other girlfriends since, I just haven’t found anyone else I want to settle down with, that’s all.”  He raised an eyebrow at her glass.  “Want another one?”

“So where’s your party at tonight?”

“Mel’s boss is throwing a bash for their office. He rented the Rex Hall.”

Kaley noticed him glancing at the clock on the wall.  “Do you have something to do?”  She turned toward the door as someone unlocked it from the outside and he stood.

“Sean!”  The dark haired woman dropped her duffle bag and ran into his open arms.  Kaley watched dumbfounded as he hugged her close.  He had a girlfriend.

“I was getting worried.”  He took her coat from her and hung it up.

“My bus was delayed.  There was a crash on the highway and we got caught behind all the traffic.  I don’t think it was too bad.  I mean, there were ambulances and stuff, but the cars looked to be in not bad shape when we were finally able to go by.”

“And you didn’t think to phone?”

She shrugged.  “Ooh! Are you having rum and eggnog without me?”  The woman finally turned her attention to Kaley.  “Since Sean has zero manners, I’m Reese, by the way.”

“Let me guess.  He didn’t tell you I was coming?”  She took the drink Sean handed her and settled on the cough beside Kaley.  “And he says I’m forgetful.  You’re getting old, big brother.”

He scoffed.  “And you get more immature the more years you put behind you.”

“Mom’s going to flip when she hears you finally have a girlfriend.  It’s about time you got over that stupid bitch.”

“Well, what?  By the moons, she was.  None of us could figure out what you saw in her.”

“You were sixteen when we split.  Don’t tell me you gave a shit.”

Reese pounded back her drink.  “Of course I cared.  How many big brothers do I have?”

“Right.  But you were always my favorite.”  She skipped back to her knee high leather boots, slipped them on, and shrugged on her coat.

“Where are you going?”

“Just remember I’m leaving at eight tomorrow morning.  With or without you.”

She closed the door with a wave at Kaley.

“She’s, uh… she’s one of those high energy people.”  Sean smiled and went to refill their drinks.

“No kidding.  I had no idea you had a sister.  Or three brothers for that matter.”

Kaley shook her head.  “Only child.  Your mom and dad?”

“Both alive and running the farm.  You?”

“My parents died when I was fifteen.  Drunk driver.  I went to live with Mel and her folks.”

“But you don’t do Christmas with them?”

“They’re not around since they retired.  Mel gets on a flight tomorrow to join them in Mexico tomorrow morning.  They invite me every year, I just… Christmas needs snow.  You know?”

Kaley found her gaze moving to his mouth.  He had a great smile.  Had they really been living next to each other for almost six years?  How had she never noticed?

“Nothing.  I was just thinking that I can’t believe we’ve been neighbors all this time and we know nothing about each other.”

Sean stood and walked her to the door.

“So, you’re just home alone tonight?”  She looked up into his dark green eyes.

“I was just thinking… Mel is bringing a date tonight and I’m going to be the third wheel.  Want to come along?”

“Come on.  I’ll owe you one.  There’s this guy that works there that always gets drunk and hits on me.  You can pretend to be my boyfriend.”  Sweet mother of fuck.  Had she actually just suggested this?  She was thirty four years old for shit’s sakes.  Her face turned a deep shade of red.  “Sorry.  That’s so highschool.  I’m just going to leave before I make myself sound any more stupid.  Thanks for the drinks.”

Kaley rushed out of his apartment and back into hers.  Good god!  How many eggnogs had she had?

For more information on Mireille Chester and her books go to http://mireillechester.blogspot.ca

I signed up to do a review but NEVER received the book even after I inquired about it. Sorry Girls I wanted to be able to share it with you. :-(