Is eight weeks enough time to earn back the love of someone you've betrayed...the only one you've ever loved?


Shelly has been in love with Cal since they started dating in eleventh grade. Despite everyone saying that the odds were against them, they got married after graduation and built a life together. Now, six years later, she is faced with the ultimate betrayal. Devastated, her first instinct is to call it quits…


After a drunken binge at his best friends’ bachelor party, Cal betrays the one person who has always been there for him, his wife, Shelly. Terrified and realizing she might divorce him, Cal must come up with a way to prove to her that his love is true…


Cal asks Shelly for eight weeks. Eight weeks to convince her that their marriage is worth the fight. Will Shelly be able to trust him again, or will their marriage end the way many others do when faced with opposition… In divorce?


8 Weeks is book 1 in the Time for Love series, but can be read as a stand alone. 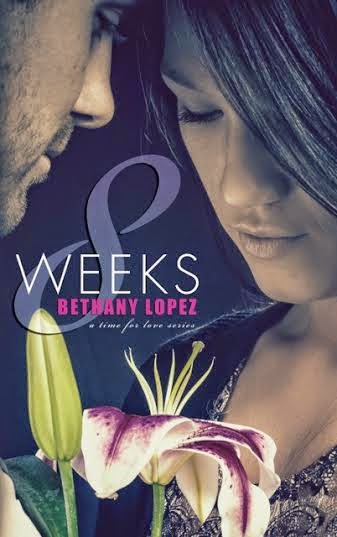 Award-Winning Author Bethany Lopez began self-publishing in June 2011. She's a lover of all things romance: books, movies, music, and life, and she incorporates that into the books she writes. When she isn't reading or writing, she loves spending time with her husband and children, traveling whenever possible. Some of her favorite things are: Kristen Ashley Books, coffee in the morning, and In N Out burgers.

This book was a rather quick read. When I first considered reading this book I was apprehensive and wasn't sure that I would be able to give it a good review because I abhor cheating. Let me tell you that it was so beyond that! :D

Cal, the main male character was celebrating with his friends and did something questionable while drunk. He was immediately sick at the thought and was honest with Shelly right away even though it hurt her terribly.

Cal was actually a wonderful and caring man and husband. I actually rooted for him even though he brought all the troubles on himself.

Shelly was strong, stubborn, loyal, and fun. I would probably have behaved worse than she did so I give her some credit.

I only have one complaint. I really wish that we would have found out for sure what happened. Then again, maybe it was easier to accept, forgive and support the characters with the element of doubt  than it would have been if the deed was committed in another scenario.

Anyway, this book was emotional, sweet, dramatic, romantic, filled with awesome characters, and a plot that had me turning pages to see if their relationship would be saved and what would happen.

I received an ecopy of 8 Weeks  in exchange for my honest opinion. I thought it was sweet, endearing, thought provoking and an emotional workout. I liked it a great deal and I will be more than happy to read the next book in the series.