Review ~ Love Repeated by Nancy Corrigan with a giveaway

Young lovers, Kyle and Ronnie, had the world ahead of them at seventeen. Stubbornness, misunderstanding and a mother’s influence forced them to forge their own paths. A decade later, neither can find love.
Ronnie always thought it was easier to move on than deal with the pain and hurt of past mistakes. She made plenty of them, but so did Kyle and her parents. Kyle knows the moment he touches Ronnie that he still loves her. He won’t repeat the past and let her leave him a second time.
It takes a tragedy and a secret to reunite them, but their passion returns in a rush along with regret and guilt. To have love, they’ll have to overcome their issues—before her mother’s sin takes Ronnie away, once and for all. 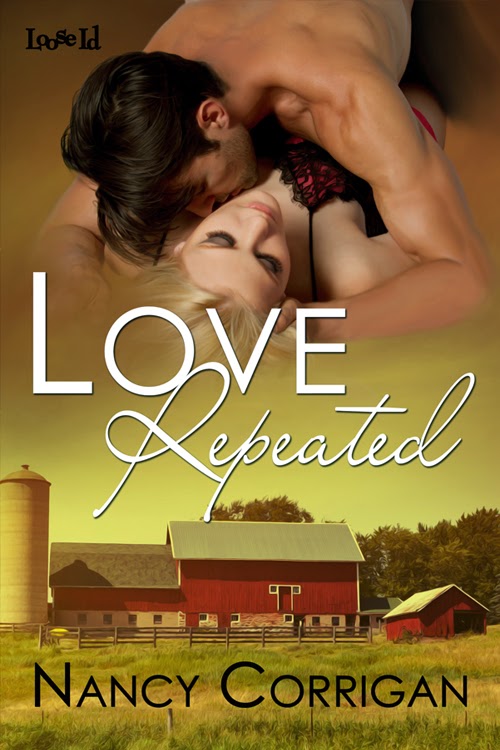 “Damn, you’re as stubborn as ever, aren’t you?”
He grinned and trailed his fingers down her spine. “Persistent, not stubborn.”
She huffed and twisted out of reach. He let his hand drop, curling his fingers so he didn’t reach for her again. She draped the strap of her purse over a shoulder and grabbed the handles of the crate. “Obstinate and hard-headed, that’s what you are, Kyle Sander.”
God, he loved when she used his full name. “It’s good to be consistent, doll. People know what to expect from me.”
The light from the phone she held illuminated her face. A smile tugged at her lips. She turned away. A shame. He wanted to watch it spread.
“Good night, Kyle. Thanks for checking on me, but as you can see, I’m fine. No wild animal or drugged college kid has assaulted me.”
On a grunt, she hefted the trunk and started walking away from where she’d left her car. Well, shuffled described her awkward steps better. He watched her struggle with her unusual baggage, puzzled by the older Ronnie. She’d gotten good at avoiding questions. It only stoked his curiosity.
He fell into step next to her.
She glanced at him. “Why are you still following me?”
“Figured you’d need me to carry that for you.”
“I can manage.”
He glanced from her fingers tightened around the handles to the strained muscles in her arms. “Looks heavy.”
“I’m stronger than you think.”
He matched her slow pace. “I can see that.”
“Then why are you still here?”
“Well, the cabin is a good half mile up the mountain, and once you realize you can’t spend the night there, you’re going to have to carry that thing back down.”
She stopped and carefully set the trunk onto the ground. “Why can’t I stay there? I do own it.”
“So you turned the power back on and had somebody clean it?”
She licked her lips. “I don’t need lights, and a little dirt won’t kill me. I’ll survive a night. It’ll be like camping, and I’ll call a mechanic in the morning. So, you see, I’m fine. I don’t need you.”
He bit his lower lip to stop his grin. “And I suppose you don’t need water or to be able to flush the toilet either.” He gave up and let his amusement show. “Need power to run the well pump, Ronnie.”
She glanced from the trunk at her feet to the road in front of her. “I need to get up there.”
“Tonight?”
She gave a small shake of her head. “I guess not.”
“How about I get you somewhere that has running water, then bring you out here tomorrow?”
“Being my hero again?”
“I always was good at it.” 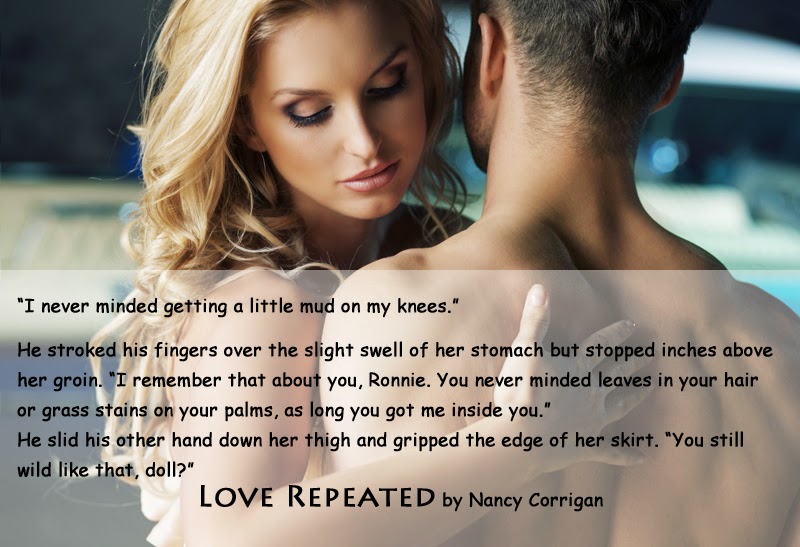 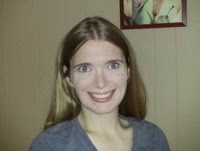 A true romantic at heart, Nancy Corrigan is convinced there’s a knight in shining armor for every woman (or man), but you won’t find damsels in distress in her stories. She adores pairing alpha heroes with woman strong enough to match them and bring them to their knees. She also enjoys flipping the traditional roles in romances because her motto is—love and people should never be forced to conform to anyone’s norm.
She holds a degree in chemistry and has worked in research but now focuses on ensuring quality. She considers it the perfect outlet for her as she’s the first to admit she has some OCD tendencies. It carries over into her writing life too. While engrossed in a novel, she has a habit of forgetting to eat and sleep. Fortunately, she’s married to her own knight in shining armor who understands her oddities and loves her anyway. They reside in Pennsylvania with their three children, dog, snake and guinea pigs. Her other interests include tattoos, animals, classic cars and all things spooky and sexy.

Amazon page (Add me to your favorites or like me.)

I read this one pretty quickly. I really liked the town and most of the characters. I have a feeling that this series might just get better and better.

I absolutely adored Kyle but Ronnie, she got on my nerves. She seemed very selfish and snotty in a way. I hated the way that more often than not, she shoved Kyle aside instead of letting him in. She seemed to regret what she did in the past, but in my opinion, she just kept piling more sh*t on top of the pile that she already piled on him.

In the end all is well and she finally comes to her senses. ;-) I am anxious to see what happens with Iona and if we will find out if it really was Gerald's wife that was behind the occurrence that sends Ronnie to the hospital. There is soooo much that I can see happening with Kyle's brothers! I just can't wait to read the next book!

There was anger, mystery, guilt, lots of hot sex, action and danger, plenty of surprises, a small scenic town and a great cast in the pages of this lovely new series by Nancy Corrigan.

If you like Nancy's writing, you won't be disappointed with the lack of paranormal. She gives us plenty of action and she still has the passion going top notch!

I received an ecopy in exchange for my honest opinion. Another winner if you ask me! 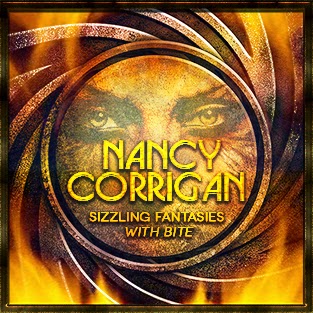