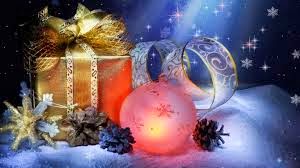 Happy December! It is hard to believe that this year is almost over. I'll keep you updated but I am considering either taking a break from blogging or quitting after next month.

There are so many changes taking place that I can't keep up. Every day I hear more but I have no idea where to find out this information. I still haven't even figured out how to fix the problem with not receiving notifications when people comment on the posts. :-(

I don't know about all of you, but I am not even receiving as many visitors each day as I was. In addition to issues with the blog, it is the same on Facebook.

I just feel like I am wasting my time. Who am I and why should anyone want to hear my opinion anyway? I guess you could say that I am a little down in addition to being frustrated.

It all started with the complications with the GGMMMU.

Speaking of which, what did you think of this year's event?

And now, here are the answers to the GGMMMU questions:

1. Who is your favorite paranormal or fantasy author? There is no right or wrong answer!

2. What is my least favorite being to read about? *Hint* It may be over your head! The answer is Angels

3. This person gets something special on her 16th bday. It gives her special abilities. Who is she and what does she receive? Hint~ this person is in 1 of the pictured covers on the Unique ability post. Hint2~ If you don't know wait a few days to answer! Answer ~ Rae Kerrigan receives a tatu.

4. Who does Jamie love? Ryan Miller is the answer.

5. I'll tell you some names you tell me what book they came from! Ciel, Billy, and Mark what book do they come from? In A Fix by Linda Grimes is the answer to this one.

6. What pack does the Coveted Natalya belong to? Answer ~ South Toms River pack (it is from the book Coveted by Shawntelle Madison)

8. This author is known for her others. She has witches, demons, fairies, and more in her series that is in another world! We all know that her wolves are my favorite of all her supes. Her lone female wolf, was one of the first to grab my attention. Hint ~ This book and author are not pictured. Kelley Armstrong is the answer.

9. Tell me the name of the book and pack that the **Alphas** come from. Jeremy D., Eric N., Alcide H., Rhoan J., Bran,  Adam H., James R., Mateo L., Jeremy Danvers comes from Bitten and is the Alpha of the North American pack or StoneHaven pack, Alcide Herveaux is the Alpha of the Long Tooth pack in the Sookie Stackhouse books, Rhoan Jensen is an Alpha from the Riley Jensen series by Keri Arthur but they are their own pack of two. Bran and Adam H are both from the Mercy Thompson series. Bran is the merrick and in charge of all North American weres, but his pack is the Aspen pack or the Merrick's pack. Adam is the Alpha of the Tri Cities pack., James Riley is the Alpha of the Wolf Creek pack and is from the Legacy series by N.J. Walters. Eric N. and mateo L. are not Alphas!


10. This female wolf has the same initials as a popular US Senator that ran for president a few years ago. Her last name actually rhymes with his. Who is she? Jessica McClain

11. In this book the heroine is a dark elf and more. She has two love interests. One is a phoenix and the other is a gargoyle. Hint: I have mentioned this series in the past, though it has been awhile. The answer is either book from the Set In Stone series. Stone Cold Seduction or Stone Cold Revenge by Jess Macallen.

11. In this FireE Dragon book, the lead is Char. What is the object of his affection? She is a succubus. The answer comes from Fire In His Eyes by Stella Price

12. 1000 years ago this DragonLord, accidentally killed his wife on their wedding day. Now she is back but still in danger. Who is the author? Mandy Rosko

13.What is the difference? Answer djinn have demon in their blood and genies do not.

14. What is the name of this Gargoyle, What book does he come from and What is his heart made of? His heroine's name is Ella and she wakes him from his eons of sleep. Hint~ One of those questions basically answers one of the other ones! :P The answer is Kees is his name, He comes from Heart of Stone by Christine Warren and that is also what his heart is made of.

15. What is the name of the book series that features vampires especially two who vie for the affections of the strange human  woman with some fairy blood who can hear others thoughts? The Sookie Stackhouse Series is the answer.

16.  I recently reviewed the first book in a vampire series. It featured vampires and a woman who became a hunter of them. Most of the vampires were lawyers or involved with a law firm. What was the title? Answer ~ Legally Undead by Margo Bond Collins

17. What is the name of the popular vampire series that took place mostly in a school type setting? The vampires went to school with other beings that were half vamp half human. What was the series called and what were the halfsies called? Answers ~ Vampire Academy and dhampirs

18. Sorceress is to Sorcerer as witch is to? Answer ~ Warlock

19. According to Jennifer, what is Theo? A conjurer is the answer to this question.

20.  Tell me the name of a book or series that has a shaman, witch doctor,or druid in it (that isn't pictured) Answers varied. :D Thank you!

21. What type of shifter has wings that sprout from their human body? Pterons

22. In this book, the shifters can talk to one animal that is kind of like a guide what are they called and what is the name of the book? Feras and Shift Happens

23. Who is Mercy's father? Old Joe Coyote or Coyote

24. What popular vampire series has vampires that each wield one type of element? The Vampire Academy

26.What are three or more types of mythology that depicts Gods & Goddesses? Hindu, Greek, Roman, Irish, or Egyptian, Norse

27. What are the names of four muses? Hint*We were recently introduced to two of them in an interview Calliope, Clio, Euterpe, and Erato.

29. What or who are the Arum and what book or series would I find them in? They are bad aliens and you can find them in Jennifer Armentrout's Lux series.

31. In this selkie tale, Tara arrives at an Irish island. What is the name of the Island?
Hint* It is the same name as the series name. Seal Island

32. In this YA trilogy, there is a werewolf named Derek and he falls for a necromancer named______. There is also a witch named_____. They were all stuck in a home for troubled children with others at first. Then they escaped and went on the run with Derek's brother who was named _____. Answers in this order are: Chloe, Tori, and Simon.

33. What is the name of the  necromancer we met today? Ruby is her name oh!

34. In this ghoulish series the heroine's name is M.J. and she is a ghost hunter. What type of animal does she have as a pet? Hint* It has a some what foul mouth. A parrot is the answer.

35. Which of today's featured books host a coroner/medical examiner that loses a body on their first day?  Precinct 13 by Tate Hallaway is our featured book.

36. Match the witch with the title that she belongs to. A. Jadis  B.Paige C. Giselle D.Celeste E.Isabelle F.Miranda 1.Bitter Night 2.Witch Blood 3.Dime Store Magic 4.The Lion The Witch and The Wardrobe 5. Awake At Dawn The answers are as follows: A4, B3, C1, E2, and F5.

37. In this popular series with a mixture of creatures that ended with book thirteen, what is the name of the little girl witch who becomes a very powerful witch and the main character in the last book? Savannah Levine is from the Women of the Otherworld series by Kelley Armstrong.

39. In this author's books, wingless half angel half humans are called what? They are called Rephaim.

40. What is the Greek term for these beings that have power in dreams? Answer ~ Onar Caphar

41. What do you call these people who can summon the souls of the dead of their own kind? Crafters is the answer.

42. What is Uncle Mort's profession?  He is a Grim Reaper.

43. Shay isn't human. What race does she belong to? She is a Cryptid.

44.In the Chicagoland Vampire series, there were gnomes. What was one of their names? Todd.

45. In the Mercy Thompson series, there are many beings. Can you tell me what type of being (elves, dwarves, gnomes, trolls, or fairies) you will find and the name of one of them. Answers vary! I can't possibly list all the correct answers. :-) The most popular answer was Zee!


47. Name Santa's elf that wants to become a Dentist. The answer is Hermey.

Here is the CIG for December.

All followers aged thirteen and older are eligible provided TBD ships to you. I will email the winner and they will have 48 hours to respond. Good Luck!

a Rafflecopter giveaway
Posted by Brenda Demko at 12:00 AM