Family law attorney Maddie Prescott is driven to succeed. A pawn in her parents’ messy divorce, she devoted her career to representing children in court, and when her husband’s early death makes it seem like she can’t have it all, she’s ready to beat the odds by going to a sperm bank. One advantage to single parenthood is that her child will never be a pawn. That, and she’ll never have to deal with sarcastic ladies’ men or liars.


Jack Worth promised to look out for his dying best friend’s wife: a small repayment for someone who once helped an irredeemable bad boy find the path to happiness. So, while Maddie Prescott’s baby plans are questionable, duty and loyalty prompt Jack first to volunteer as the sperm donor…and then to propose a marriage of convenience. And the more he gets to know her, the more this onetime player will see that Maddie is the woman of his dreams, and that the child they will make deserves to be from a direct 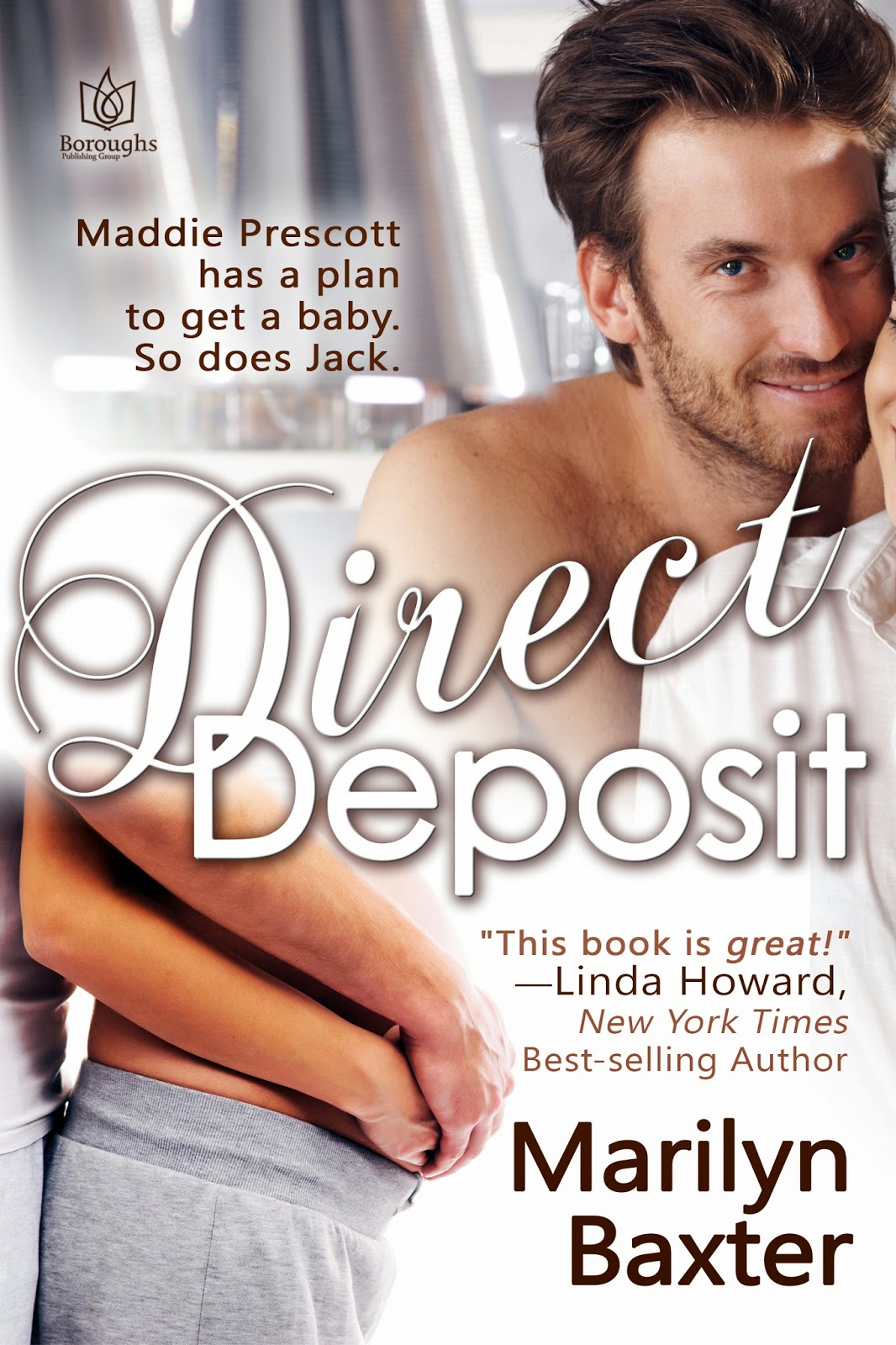 She wanted to make a withdrawal from a sperm bank. He would give all he has to make a direct deposit.

It’s time to move on, Jack,” she told him. “And I think it’s time we stopped these monthly pity parties. We struggle to carry on polite conversation. I choke on every bite of food. You sit there feeling sorry for me. I’ve made some decisions in the last few weeks that will move my life in a new direction. I only hope you’re able to do the same.”


“Is that what the sperm canister is all about?”


“How...” Her cheeks burned from embarrassment.


“The letter behind your phone. You aren’t seriously considering going to a sperm bank are you?”


Maddie pushed away from the table and picked up her plate, heading toward the kitchen. “And if I am, what makes it your business?” Chagrin replaced the previous awkwardness.


Jack followed, juggling his plate in one hand as he nudged open the door to the kitchen with his elbow.


“What the hell are you thinking? You’re going to get yourself knocked up by some total stranger so you can play Mommy?” He took her plate and scraped it into the sink.


“No one is knocking me up as you so charmingly put it.” She crossed her arms and leaned against the counter. “The procedure is done in an office by a doctor and—”


“I watch The Learning Channel, too. Surprised?” He loaded the dishwasher while she looked on in amazement. “What? I’m housebroken. I’m not Emeril, but I cook a mean meatloaf and mashed potatoes.” He squirted dish gel in the dispenser. “From scratch,” he added.


“Quite honestly, nothing about you would surprise me, Jack. What did surprise me was my husband being in business with you. You were as different as… as…”


“Champagne and beer?” he suggested as he rinsed the sink. “Caviar and hot dogs? You and me?”


“You got that right.” Maddie lifted her chin defiantly.

In 2001, Marilyn discovered Romance novels quite by accident, which led to a renewed interest in writing. She started out by writing fanfiction about Clark Kent, Lois Lane and Superman, which developed into a desire to write about her own characters. She’s had over forty short stories published in the confessions and Romance magazines.


Also, she has taught a class in how to effectively write for this genre and worked as a researcher and copy editor for several Romance authors. All this combined to give her a great love of the Romance genre and helped develop a multitude of friendships in the Romance community.


She’s a member of Romance Writers of America, as well as her local chapter, Heart of Dixie. In addition to reading, Marilyn loves to knit (as long as it’s only a scarf), cook (in the crockpot), garden (in a couple of pots on her patio), and her motto is “Have passport, will travel.” She’d love to add to the list of 32 states and 21 foreign countries she’s already visited.


After raising two great sons, she loves to spoil... er... dote on her two granddaughters.

First of all, I am a HUGE fan of the title! It was awesome!

Maddie was a no-nonsense lawyer who had lost her husband Alex. He had been the love of her life and she misses him terribly. Before he died he told her that he missed having kids with her. He wanted her to live and not have regrets when her time came.

While having dinner with Maddie to make sure that all is well, he sees a paper about sperm donations. He questions her and....

I liked this story. There was lots of witty banter between the characters, lists of pros and cons, plenty of humor, romance, love, doubts, promises, and wonderful life like characters that will have you eating out of the palm of their hand.

I love Jack. He knows what people say about him but strives to be the best that he can. He knows how to do commitment despite not do the relationship thing. He went above and beyond even when he was scared and out of his element.

Maddie was smart but I can't say that I liked her. She  rubbed me the wrong way a few times.

I liked Millie very much. She was the bomb! If you like slow building relationships in your books, give this one a try.

I received an ecopy in exchange for my honest opinion. I enjoyed it. :-)