VBT: Review ~ To Stand Beside Her by B. Kristin McMichael 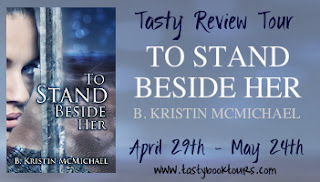 To be the best courier in the world, eighteen-year-old Benét Leila follows three simple rules: always work alone, never stay in one place too long, and never fall in love. Too bad she didn't follow her own advice.

Nalick is your typical king. He's rich, powerful, and always assumed to be right. When Leila crosses paths with King Nalick, she finds herself trapped. In a rush to save her best friend Kay from a prison sentence for a crime Leila committed, Leila trades her hand in marriage in exchange for Kay’s freedom.

Tomboy Leila does not want to grow up, but in three months’ time, she will be married to King Nalick, if Nalick can keep his end of the bargain. First, Nalick must make Leila fall in love with him, a hard task since Leila is not ready to love again after losing her first love to a greedy king. Second, Nalick must keep her safe. He is not the only king trying to hold onto her. Leila has made many enemies over the years, and even more admirers that want her as a prize. Lastly, Nalick must convince Leila that ten years of love is better than a lifetime without. Unless Leila can trust her destiny, she might not reach her wedding day at all. 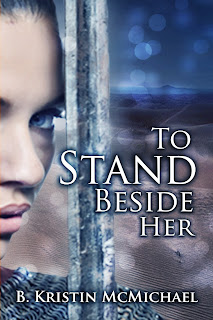 
“And where should we put her, Nalick?” one of them asked. Leila was surprised to hear the man address Nalick so casually.
“Leave her here,” he ordered.
“But, but . . .” the tracker sputtered. “If you just put my captive back in jail she will escape.”
“Don’t worry. She will not be going anywhere. She is not the ghost courier,” Nalick replied as Kay was escorted out of the room.
“Now, I’d like to be left alone with this one,” Nalick said, referring to Leila.
“Bring the seer,” he ordered. The men beside him rose and left the room. One of the men from earlier escorted the tracker out. The second man shut the door and stood at the back of the room.
“So everyone out did not include him?” Leila asked. She had no chance of leaving if both men stayed in the room with Nalick and her. One, she could possibly overpower, but two would be foolish to challenge.
Nalick rose and walked over to her. Leila stood her ground and did not move. Nalick circled around her, inspecting her like a wolf getting ready to pounce on its prey. Leila knew what was coming next. She had this same encounter with five other kings before. Though, in her opinion, they were all lesser men than the man in front of her. She still did not happily anticipate the next words out of his mouth. Leila stood in silence as he returned to his table and leaned against the tabletop. Just like all the other kings, he looked at her like she was a trophy. Leila refused to be a trophy to any king. Like any man in power, Nalick had committed acts against innocent people. Intentionally or not, Leila did not approve of hurting innocent people. She had been in several battles over the last four years, and luckily escaped with her life each time, but never once had she killed anyone who attacked her. Even those who would try to kill her did not deserve to die in her opinion.
As she stood there, the door in the back of the room opened and the seer, Gabor, walked in escorted by the man who had just left. Leila stared blankly at Nalick, trying her best to read his expression.
“I really don’t think you understand the word alone,” she commented to Nalick sarcastically, as the door shut and there were now five people in the room.
Gabor walked past her and bowed his head slightly to the king. Nalick nodded his head, and Gabor returned to Leila. Extending his hand, Leila knew what he was planning to do. Trying to stay in control of the situation, Leila gave the old man her hand. Surprised, he stopped, held her hand, and closed his eyes. After a few moments, Gabor returned to the king’s side. Nalick leaned over to the seer and asked him a question too quiet for Leila to hear.
“You don’t need to be hushed about this since you are discussing me,” Leila said before Gabor could respond. Nalick looked up at her. “I am guessing I can answer your questions just as well as he could.”
Nalick smiled. He had become the king when he was fourteen and then everything changed. Almost every person treated him differently, apart from his two good friends that were standing in the room with him now. In his years of being king, Nalick had yet to find a woman that would speak her mind to, or at, him. Here before him stood the woman who was a legend around the dinner tables he shared with neighboring kings. All told of encountering a lady so beautiful she would take your breath away and yet who was so cunning none could cage her long enough to make her into a wife. She was truly everything they talked about, and even more. Nalick didn’t need the seer’s opinion to know that this was the woman he wanted to marry.


Originally from Wisconsin, B. Kristin currently resides in Ohio with her husband, two small children, and three cats. When not doing the mom thing of chasing kids, baking cookies, and playing outside, she is using her PhD in Biology working as a scientist. In her free time she is hard at work on multiple novels; as each day passes, she has more ideas for both current and future novels.


B. Kristin is hosting a TOUR WIDE Giveaway for a $10.00 Amazon/or B&N Gift Card to ONE Randomly Drawn Commenter.  please have your readers leave a VALID EMAIL ADDRESS with their comments.

The story grabbed my attention and wouldn't let go. It was a tad confusing at first but was quickly cleared up.

To Stand Beside Her had some of everything. There was some romance (although there was nothing more than a kiss here or there mentioned), lots and lots of action, secrets, and a plot that will have your attention from the get go until the end.

I do caution to have some tissues on hand because there are a few sad moments, especially at the end.

Leila is like a female Robin Hood and she is very very good at what she does. There are many people after her. Some want to claim her with marriage, some want to hurt or kill her, and some damn near worship her as a hero. Very few people know who she really is though. They only know her as the ghost courier.

King Nalick has seen her one time before and he was mesmerized then and now. They were never formally introduced but she has heard many not so nice things about him. She decides to dislike him based on those ideas and because all of the other kings are abhorable.

She declines his marriage proposal but doesn't flee because her friend is also being held captive and she won't leave without her. In order to get her friend out, she agrees to marry him.

It takes awhile but they grow to deeply care for each other. If only life was that easy. They encounter problem after problem.

You'll need to read this for yourself in order to find out what those problems were and if she goes through with the marriage or not.;-)

Other than initially, I Loved King Nalick. He was so sweet and caring. He was great with Leila. I really liked most of the characters they were pretty charismatic.

I thought this book was really quite good and I wouldn't hesitate to recommend it.

I received a copy of this book from Tasty Book Tours in exchange for my honest opinion.

Leila is superb at altering her appearance. Have you ever worn a disguise?