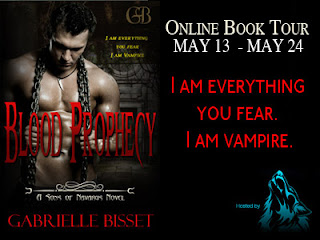 Gabrielle Bisset has been kind enough to guest post for me today! :-)

Thanks for having me here today at Crazy Four Books. This is my last stop on my tour with Paranormal Cravings Book Tours, and I want to say it's been great!

I think the question I'm asked more often than any other is, "How do you construct a story to span across so many books?" The answer is simple. As a plotter, I knew the entire Sons of Navarus series before I began to write the first book. I know who makes it to the end, who doesn't, who falls in love, whose heart is broken, who wins and how, and everything about the series storyline. I have to if I'm going to write it over eight or more books.

However, this isn't to say doing it is simple. To be honest, the hard part about creating a story that spans so many books is that I have to parse out the story. For example, I know how each couple ends up, but I can't just put all that information out at once. I have to decide how much is revealed and when. That's much harder than coming up with the story.

And the other hard part is making sure I keep every story thread in place. My editor is invaluable in this, but ultimately, it's my responsibility to make sure that something I wrote in the second book doesn't contradict what's offered in book five.

So writing a story that takes an entire series to tell isn't hard. It's the maintenance of that story that's the hard part. In the end, though, writing is one of the most enjoyable things I've ever done, so even the hard stuff seems easy.

Thanks for having me here today! I want to let readers know that they can find more information on the Sons of Navarus series at my website at www.gabriellebisset.com including excerpts, buy links, character profiles, swag (romance trading cards), and free desktop wallpapers to bring those delicious Sons to your computer. And look for Blood Prophecy, available now at all major booksellers!

The Deepest Cut (A Sons of Navarus Short Story)

I am everything you fear. I am vampire.

As the two Sons chosen to decipher the Prophecy of Idolas, Ramiel and Thane journey to find the key to defeating the Archons. Together with Noele, a born vampire, they confront their fates as they fulfill their duty to their world. Along the way, they'll find love, but death and betrayal lurk in the shadows, threatening everything dear to them.

Descended from the gods and warriors all, each Son's loyalty will be tested. Every action has consequences, and the choices they make now seal their fates. Alliances as old as the vampire world itself are reforged, and the Sons' duty is clear. Stop the Archons. Or die trying. 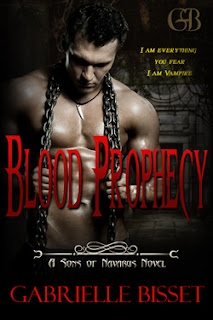 Book #4 of the Sons of Navarus series

I began writing years ago because I wanted to emulate the stories I’d loved. Now in an age that seems to glorify everything fast, I’m a bit of a relic. I believe that great things take time (you know–Rome wasn’t built in a day). I take my time as I write and edit as I go because after a decade of being an editor and English composition instructor I know of no other way. Much of the joy of writing for me comes in the choosing of the exact word that can deliver just what I want a character to express to affect the reader the most.

For me, books aren’t just narratives of this character did this, so this character did that, and therefore this occurred. They’re stories full of the bigger issues of life: love, hate, power, lust and sex, hopes and dreams. And these wondrous things all thinking and feeling beings experience are shown not through the telling of he did and she did, but through the slow unveiling of events and characters so the reader becomes a part of the story. As Stephen King has said, “Good books don’t give up all their secrets at once.”

The idea for my first book came to me in a dream. I know that seems almost cliched, but it did. I woke up one morning after having an extremely vivid dream and began to jot things down that I was able to remember. Days later, I had the first pages written and the ideas that I had dreamed about had become the characters in my first book. Those characters are the basis for the first series I’ve written, The Destined Ones Series, about a people called Aeveren who have lived side by side with humans since almost the beginning of recorded time. The first book in that series, Stolen Destiny, was published in June 2011.

And now I’ve begun a new paranormal series called The Sons of Navarus series that begins with Blood Avenged. Anyone who read Vampire Dreams will remember Vasilije, Brandon’s sire. Blood Avenged is his story. The second book in the series, Blood Betrayed, was released in May 2012, and this fall 2012 the third book, Blood Spirit, was released. I’ve even reworked the original Vampire Dreams to be an official prequel to the series, Vampire Dreams Revamped. As the series progresses, readers are drawn into the civil war between the Sons and the Archons who seek to take over the vampire world. It’s a power struggle to the death, for only one side can win this battle.

The joy of storytelling isn’t in the end result but the journey, not only for the writer but also for the reader. In a world that seems increasingly disposable, I work to create tales that find a home in readers’ hearts and memories..

Here is the Tour Schedule.

Have you read any of these books? 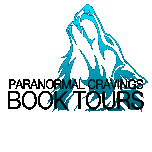