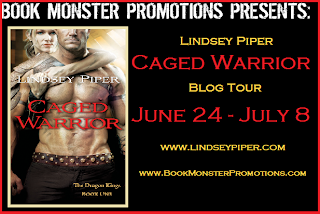 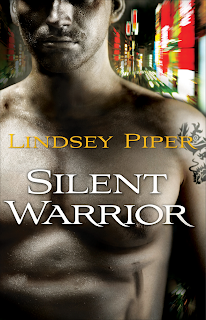 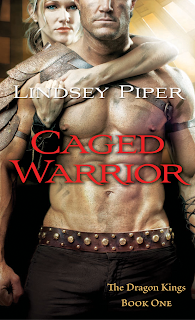 
Ten years ago, Audrey MacLaren chose to marry her human lover, making her an exile from the Dragon Kings, an ancient race of demons once worshiped as earthly gods. Audrey and her husband managed to conceive, and their son is the first natural-born Dragon King in a generation–which makes him irresistible to the sadistic scientist whose mafia-funded technology allows demon procreation. In the year since her husband was murdered, Audrey and her little boy have endured hideous experiments.

One by one, Leto introduced Nynn to the weapons available to them in the Cages. A machete and a mace. A wicked dagger and a sickle. And one particular weapon that set their kind apart. She eyed it without a hint of recognition.

“It’s a nighnor,” he said. Are you really so ignorant of our ways?”

“I’m sure circumstances have taught us very different things. Can you read?”

“Yes.” His mouth pinched tightly. “My mother taught me.”

“How is that important?”

“I’m just curious what you barbarians learn down here, other than ripping out spines. And besides, a nighnor is the ceremonial weapon of the Sath. I don’t know how to use it, but I know what it is.”

He hefted the nighnor. “Go on.”

“Each one is ancient, from the time when the Sath ruled as Pharaohs. They’re said to be the heads of men who denied the superiority of the first Dragon Kings. Coated in iron. Lacquered and polished over the years to add luster. But beneath the metal is bone. Some ancient peasant’s skull.”

Leto shrugged. “So they say.”

“Now forget the mind games, remember? You need me to learn.” Their gazes met. “More than that, I think you want me to.”

“Do not assume anything about me, neophyte.” But he held out the weapon anyway. “Here.”

“You don’t fear my wild reprisal?”

“I would, if I thought you could wield it with one hand.”

Nynn cupped the heavy iron skull. Her shoulders slumped to keep it from dropping to the damp, slippery floor. Training cells were kept damp for just that purpose, to make finding purchase even harder. Once this woman fought on rougher ground, she would be even more sure-footed and skillful.

She would only have what he gave her. Until she won. The thrill of victory combined with basic rewards made reluctant fighters into eager ones.

He had three weeks to transform her.

“Come at me.” His voice echoed off the domed ten-foot ceiling. “This is your chance to let loose the hatred I see.”

He didn’t think she would. Too much sense. Too much pride, when she already knew the futility. Yet the vigor of her sudden attack was impressive. Rather than charge, attempting to strike him, she spun and hurled the weighty weapon. Leto arched backward using the reflexes he’d honed for two decades—no matter his collar. The nighnor hit the wall just over his left shoulder. Shards of raw cave rock splintered out from a crater.

She breathed hard, hands propped on her knees. Without food, pushing that hard would continue to test her endurance. Her eyes shot sparks that were nearly literal. He didn’t like how he was drawn to her blue fire.

He braced his stance. “Learn anything, neophyte?”

“That I can take you by surprise?”

Hiding his reaction took effort, because she certainly had. As Leto had seen in the Cage, she was a fighter. He would see her blossom into a vicious creature who wouldn’t recognize her own face. That would break her. And that would make her a worthy partner.

“No, you should’ve learned that I do everything with purpose. There are other weapons better suited to your frame.” He knelt to retrieve the dagger. “Take this instead.”

She studied the blade for several moments, as if she could read its purpose. He’d never seen a warrior—let alone an untested woman—assess a weapon with such immediate understanding. And where were the aftereffects of her hazing the day previous? She believed she possessed no gift, but Leto knew otherwise. She was a changed woman.

Now to keep changing her.

Nynn extended her hand and took the dagger. With a slight movement, she twisted the handle until it fit snugly in her palm, the balance just right. Leto felt the rightness like the stir of a distant dream.

She moved quickly, so that the shield’s leather strap already hugged her left forearm. Ready to defend.

Slowly, Leto knelt to retrieve his shield and weapon of choice—the mace. His pulse was up, surging as it always did when anticipating a fight. Beneath the wan light of the bare lightbulbs, he and Nynn circled one another.

“I will be your first opponent in combat,” he rasped.

As if claiming her. Making her his, even in this violent way.

She grinned. Slinky. Sly. “Give me what you can, sir.”

With that, she attacked. 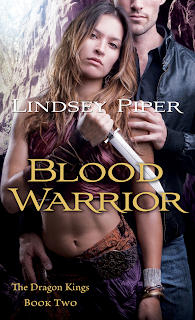 
As a young man, sarcastic, violent Tallis Pendray believed the Dragon Kings’ survival depended on a prophecy delivered in dreams by a woman named “the Sun.” His role has been to complete inexplicable, even reprehensible tasks. First, by murdering a priest, he united his fragmented clan in their hatred of him. Dubbed “the Heretic,” Tallis fled his family’s Highland estate. Now disillusioned, he seeks revenge on the woman he holds responsible for two decades of exile.

Bent on revenge, and without knowledge of Kavya’s noble intentions, Tallis kidnaps her on the eve of her groundbreaking announcement. The two watch in horror as her twin brutally smashes the tentative truce…and hunts the sister whose death would make him invincible.

Kavya is the Sun–revered, untouched, and bound by a lonely destiny that promises a deadly showdown against the last of her family. Tallis is the Heretic–despised and exiled because of actions that seem random, heartless, and contrary to the safety of the clans he protects. She’s not a goddess, and he’s not a natural born killer. A desperate trek from the Himalayan foothills to the Scottish Highlands reveals two secluded souls hidden by bloody reputations. Will their trust be strong enough to avert an all-out war that could destroy them, and their kind, forever?

GIVEWAY DETAILS:
GRAND PRIZE: $25.00 Gift card to Amazon, an eBook of SILENT WARRIOR and a paperback of CAGED WARRIOR

2ND PLACE: 5 winners will each receive a paperback of CAGED WARRIOR and SWAG

3RD PLACE: 5 winners will receive an eBook of SILENT WARRIOR


Thank you for commenting! Don't forget to enter the Comment Incentive Giveaway. The link can be found at the top of the page!
Posted by Brenda Demko at 1:00 AM