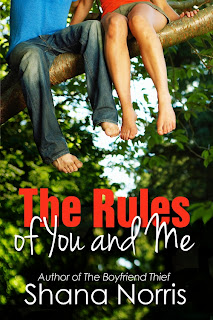 Title: The Rules of You and Me

Hannah Cohen has always lived her life by a set of carefully constructed rules to maintain the image of perfection. But now, the rules aren't helping control the chaos that is quickly taking over.

Opting out of spending the summer in Paris with her mom, Hannah instead heads to the mountains of North Carolina to stay with her aunt. The Blue Ridge Mountains provide a barrier between Hannah and the rest of the world, a safe haven where her secrets can be forgotten.

When Hannah crosses paths with Jude Westmore, a guy who hangs a different shirt from the tree in his front yard every day, she finds herself breaking out of the comfort of her rules and doing things she had never dared before. As the summer passes, Hannah and Jude grow closer and make up their own rules for dealing with life.

But when the secret Hannah has tried to forget is finally revealed, even the new rules can't save her from possibly losing everything--including Jude.

This young adult romance is a standalone companion novel to Shana Norris's The Boyfriend Thief.

“Where is all your stuff?” I asked. My room was filled with awards and pictures. Evidence of the life I had led up until now.

“I threw out a lot of things in the days after Liam died,” Jude told me. “Nothing seemed important anymore.”

He pointed to the door across the hall, which was closed. “That’s Liam’s room. It’s just like he left it the last time he was here, a few weeks before he was deployed. It’s a disaster area.” Jude laughed. “Liam got that from my mom. They always told me I was the weird neat freak of the family.”

I slipped my arm around his waist, leaning my head against his shoulder. “Do you realize that’s the first thing you’ve told me that makes you different from your brother?”

Jude tensed against me for a moment, then relaxed. “I guess it is. I never could be as messy as he was. It drove me crazy. My cleaning drove him crazy too.”

“See? You’re really not your brother, Jude. You don’t have to live in his shadow or try to be like he was.”

He let out a long breath, like he was letting go of something he’d been holding onto for a long time. “I know.”

Jude’s arm slipped around me and he pulled me into him. I pressed my ear against his chest, listening to his steady heartbeat. His fingers trailed up and down my arms, making me shiver at the tingles his touch spread over my skin.

I let Jude ease me down onto the bed. He moved over me, his lips pressing into mine. I closed my eyes, blocking out all thoughts of his house and my mom and the rules. The Hannah I wanted to be could do anything she wanted, and this moment, all I wanted was to be here with Jude.

My fingers slipped under the edge of his T-shirt and Jude raised up enough to pull it over his head, tossing the shirt aside. His skin felt like fire under my touch. I had never been this close to anyone, not even with Zac. It excited and terrified me at the same time. I wrapped my arms tight around Jude’s neck, squeezing my eyes shut to keep out any unwanted thoughts. 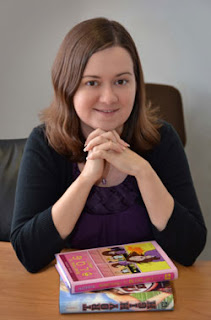 Most days, Shana Norris still feels like she's stuck at sixteen, which is probably why she enjoys writing about teens. She lives in a small town in eastern North Carolina with her husband and small zoo of pets, which currently includes two dogs, five cats, and five chickens.


Giveaway: (1) eBook copy of The Rules of You and Me. Books will be available in mobi and epub formats. Open international. (Value $3.99 USD)


Do you now or have you ever liked climbing trees?