Release of Betrothed by Lola White

In witching society, magic and politics are the only things that matter, and marriages are arranged for advantage rather than love.

But neither Ileana Lovasz nor Eliasz Levy are looking for love. Humiliated by a string of broken betrothals, Ileana only wants freedom from her manipulative grandfather. Eliasz simply wants an alliance with Ileana’s brother Silviu, a man rising through the witching ranks. That is, until the Lovasz woman arrives at his home and stirs up emotions he’d never thought to feel.

Silviu has bigger things on his mind than his sister’s marriage. Georgeanne Davenold, Silviu’s betrothed and the key to his rise in power, is back in his life after a ten year separation that left her distrustful of his intentions. Their union is a novelty, spanning the divide between Matriarchal and Patriarchal Families. Their union is also alarming, combining the influence and magic of two witches only heard of in myth and legend.

Ileana, Eliasz, Silviu and Georgie must build an alliance that will help them all get what they want but, with too many lies and too many enemies, the game they’re playing turns deadly. When the two women come under attack, neither Silviu nor Eliasz knows which is the target. They only know they will protect the women their hearts have claimed as their own, even though that means defying the traditions of witching society, risking every goal they hold dear and confronting the dangerous members of their own families. 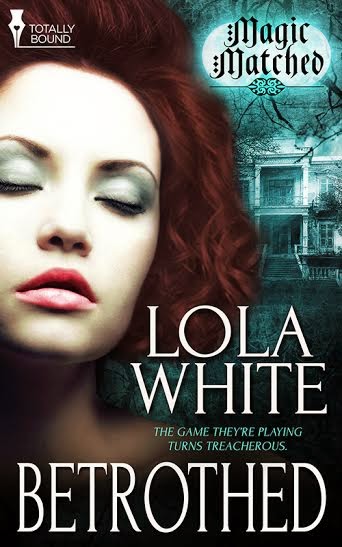 Excerpt
“Georgeanne Davenold is now old enough for me to do exactly as I wish to her, without her Family’s interference.”
Vasile stared at his son for a long moment, leaving Silviu feeling weighed and measured, evaluated in a way he’d grown used to, years before. It still wasn’t easy to keep calm under the silver stare.
“Don’t lose your head, my boy. This isn’t some female to take without consideration.”
Silviu hefted a brow. “I’ve never had any complaints.”
Vasile scowled. “You put your damned heart on your sleeve and you’ll lose every advantage you’re likely to gain with that girl. She’s been molded in Madeleine’s image. Do not underestimate her.”
“That’s exactly what you want, Father. A woman as strong as Madeleine. Her entire life has been arranged by you for that very reason. She was always meant to be Madeleine’s second reign.”
“And your first, but she’s your weakness,” Vasile spat, abruptly leaning forward in his chair. One rigid finger drilled into his desktop, emphasizing his point. “I don’t know what the hell it is about her, but I could see it the moment you met. Do not jeopardize all we’ve worked toward for a female who will never allow you to be her weakness. She has her own agenda and, with the sole exception of that Beltane night, she’s never given us any reason to think she would be willing to put it aside to please you!”
Surprise held Silviu for a breathless moment, a hideous vulnerability sweeping over him at how easily his father had read him. He cleared his throat with effort. “We both want to lead the covens. What makes you think her agenda wouldn’t match mine, if properly explained to her?”
“You won’t win the heart of a matriarchal female,” Vasile countered. “You’re too…male, for any of them. So, don’t even bother to try.”
Silviu hid the fear spearing through him by slouching back in his chair, a deliberate insouciance that was all that ever truly fooled his father. “I know. It’s a political alliance, not a love match.”
Vasile lost some of the tension in his shoulders. “Only Georgeanne can unlock your full potential, only she can provide a conduit for all the magic that should rightfully be yours. Together, you could join the Families, power from both sides of the Schism. Just think! You will rule with your combined power over all the covens.”
“Just as you wanted, Father.”
With one last searching glance, Vasile shifted back in his chair, a crafty gleam sparkling in the depths of the eyes he finally turned on his daughter. “Eliasz wants you.”
“That’s ridiculous,” she scoffed. “He doesn’t even know me.”
Vasile shook his head. “There is no earthly reason why the powerful Levys would want to ally themselves with our Family except Eliasz’s lust. We aren’t politically relevant.”
“But that will change,” Silviu said.
“Yes, but no one in the Levy Family knows the extent of my plans.” Vasile raised a brow at Ileana. “You will do everything in your power to keep Eliasz’s attention and win his heart. Do you understand me?”
Ileana’s eyes went wide. “Throwing me into Eliasz’s bed, then?”
Vasile pointedly eyed the tiny skirt riding high on his daughter’s thighs. “Are you going to tell me you’re a virgin?”
“I won’t tell you anything on the matter at all, Father.” Ileana cocked her head. “What makes you think this time will be any different from before? Grandfather is going to find some reason to pull back from this alliance.”
Vasile’s hard face went rigid. A low growl ripped from his throat. “The old fool has no idea how much he’s cost this Family. He is the reason we have no power in the witching world, but so long as he wields the magic of our bloodline we have no weapon strong enough to bring him down.”
“We need this alliance,” Silviu said, turning to take Ileana’s cold fingers and squeezing gently. He tried to give her comfort, hope. For so long, they’d been each other’s support in the face of their Family’s machinations. “The Levys are no joke, Iley. This one will go through.”
“You can’t promise that,” she argued.
“We’ll do our best.” Vasile rapped his knuckles against his desktop. “But you’ll have to do your part, girl. Wrap that man around your finger. I know you can do it. You can be very charming when you put your mind to it. People naturally like you.”
“Convince him to elope with me, perhaps?”
“If need be, yes.”
“I’ll see what I can do.”
Silviu glanced at his sister, the sudden calmness in her voice sounding alarms in his skull. She only used that tone when she was about to challenge the archaic, patriarchal rules they were forced to live by.
Vasile seemed unaware as he moved on to his favorite subject—intrigue. “Now, as for the meeting with the Levys, I will expect very specific things from both of you.”
It was nearly the witching hour before they were given permission to leave their father’s presence, lectures and orders still ringing in Silviu’s ears. When he slipped out into the cold hallway, he shut the study door behind him carefully, calmly and with complete control.
Only then did he lean back against the wall, close his eyes and let a shudder born of too many emotions to fully contain roll through him. Tension and intrigue fell from his shoulders, making him feel half his weight, now that his father’s focused gaze was no longer resting on him.
“Now’s your chance, Silver,” Ileana whispered.
He nodded. “And yours. We will both be bolder than we’ve ever dared before.”
“I’ll give it everything I have,” she promised.
Dragging in a deep breath, gathering his cracking armor of calm around him once more, Silviu set off toward his bedroom, making his own plans for Georgeanne Davenold that had nothing to do with politics, and everything to do with pleasure.

About this Author:
Lola White writes what she writes, which is erotic fiction. Sometimes horror, sometimes paranormal, sometimes romance. It’s all sexy, but never predictable because she likes to twist reality at its edges in her stories. She likes delving into the emotions of her characters, finding their strengths and weaknesses, and seeing (and showing) how they get themselves out of whatever trouble has found them—if they can. Don’t try to label her collection of tales beyond the most basic description, EROTICA, because she writes whatever story comes to mind, whatever speaks to her. She’s certain something in her library will speak to you, too.


What do you think of arranged marriages?

Don't forget to enter the Comment Incentive Giveaway. It is a great chance to win a book you'd like to have! Just Comment!
Posted by Brenda Demko at 12:30 AM

Email ThisBlogThis!Share to TwitterShare to FacebookShare to Pinterest
Labels: Once Upon An Alpha, release blitz