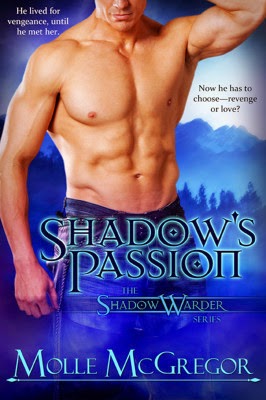 You can purchase it from: Amazon

He lived for vengeance, until he met her. Now he has to choose—revenge or love?

Exiled by her people after an accidental death, Celeste’s power is so unstable the elegant Shadow healer is considered a deadly menace. Fifty years of isolation have left her a little lonely. And more than a little bored. When a nearby family falls victim to demon infection, she decides to go hunting. Without backup, it won’t be long before the demons are hunting her.

A dangerous assassin, Gabe has better things to do than save a Shadow from her own reckless behavior. Like find the demon who killed his brother. Sure, the Shadow is gorgeous, alluring, and she needs his help. But he can’t afford to get distracted. Everything changes the second he spies his brother’s killer among the demons after Celeste. Now, nothing will tear him from her side.

Gabe is dangerous and secretive. He’s also a skilled fighter and sexy as hell. Celeste knows better than to team up with a Warder, but she’s not sure she cares. It’s been a long dry spell since her exile. Neither of them expects their fling to turn into something more. But when Gabe’s past catches up with him, he learns that his brother’s murder was just the beginning. A new evil is rising, and its sights are set on Celeste. Now Gabe has to make a choice: revenge or love? 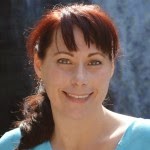 Molle’s writing career started when she was seven and suffered terrible insomnia. Night after night she couldn’t sleep until long after mid-night, only to wake a few hours later. Frustrated with her inability to just go to bed, (and her penchant for sneaking a book and a flashlight under the covers) her grandmother said, “You like to read so much, why don’t you tell yourself a story until you fall asleep.” With this brilliant advice, Molle’s overactive brain was off and running. Now, years later, she’s finally taught herself to sleep, but she’s never stopped telling stories.
When she’s not reading, writing, or staring into space making things up, Molle is getting into trouble with her husband, two sons, two dogs and vicious attack cat in the mountains of North Carolina. She likes to hike, cook, listen to music way too loud, and hang out with her boys. She does not like dusting or emptying the dishwasher.
Website • Blog • Twitter • Facebook • Goodreads
My Thoughts

First of all it is a novella which equals an extremely short story. As usual with short stories, I wanted more!

I still have many curiosities about the races and characters themselves which I hope will be answered with book one.

Celeste is a Shadow. Her power is focused on healing but she somewhat short circuits around electricity. because of something that happened many moons ago, she basically lives as in exile all alone in the woods.

She notices a nest of vorati demons. She did not ignore them even though she probably should have. Think selfless and bad a** here!

While she is fighting the demons and getting herself in trouble, Gabe happens upon her. Gabe is a Warder and is basically forbidden to interact with shadows even though they fight the same enemy.

Needless to say there is an element of insta lust here. Call it the lure of the forbidden, fate, etc.... Regardless they discover that they are better together and bada boom bada bang, things happen and then it is all said and done.

The ending felt somewhat rushed to me but I can live with that because I know that there is more to come from this author! I just hope that there is more of an explanation about the races, the animosity between them, and of course more of Celeste and Gabe. ;-)

There was some steamy action but it was nicely written. The characters were likable. The plot was engaging and action packed. I really liked her writing style and the way things were presented.

Oh and I should mention that these demons are very bad news. It was about time an author presented them in such a way.

I received an ecopy in exchange for my honest opinion. Great read for a novella. I am overly eager for the next book!