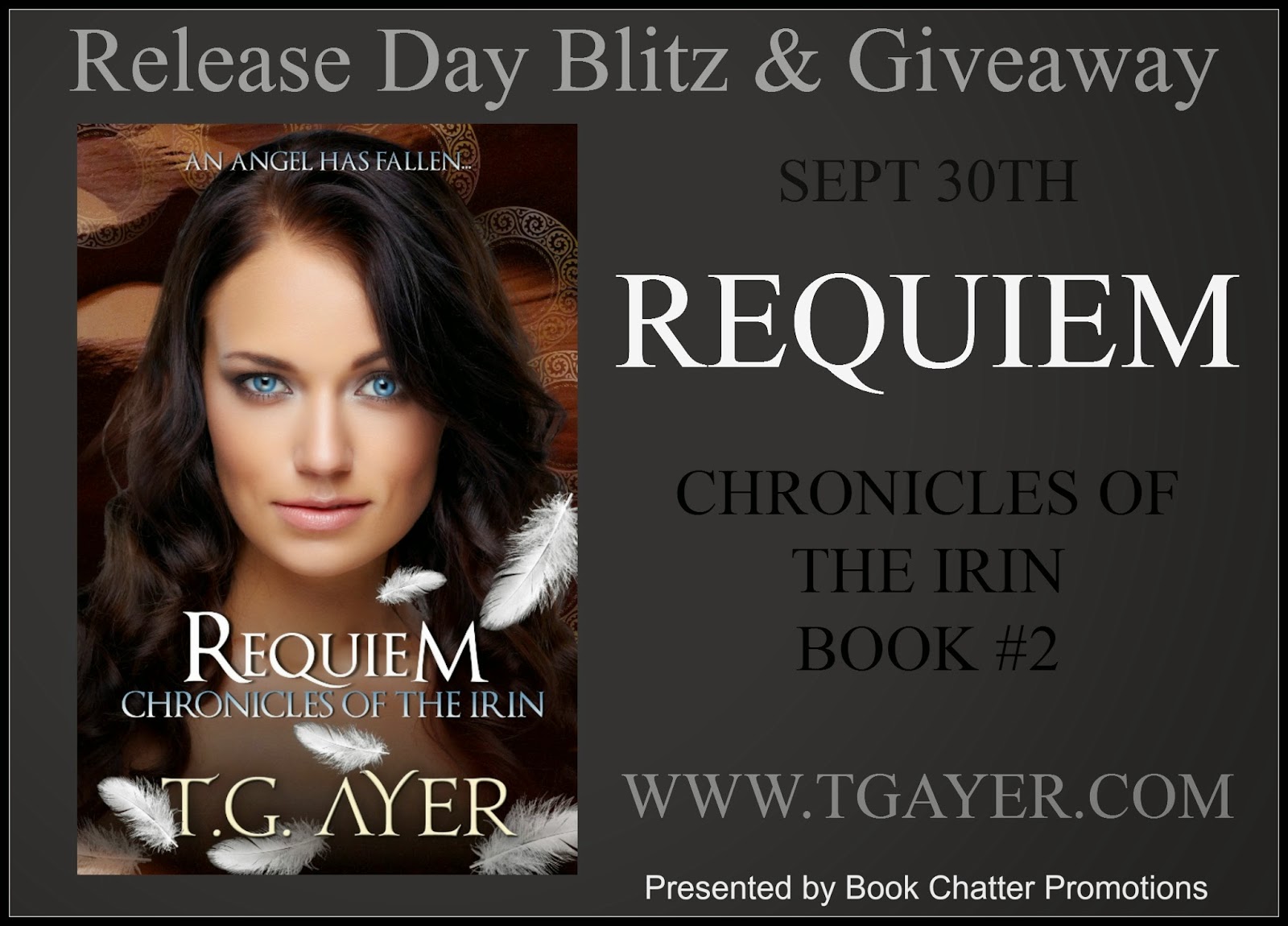 BLURB:
Her name is Evangeline and she is Nephilim.

Evie is stuck in the Underworld until she can find a way to be released from her newfound role as Hades. And the longer she remains in Hades the more secrets are revealed about her true origins. A confrontation with a Dark Angel brings two revelations to the Evie - the true identity of Daniel, the Master of the Irin's assistant, and who is he to Evie herself.

While a trip into the depths of Hades leads Evie into the fiery depths of Tartarus and eventually to the eternal peace of Elysium, will Evie find the peace she seeks? And what about the smoking hot Julian, god of Hades? How far is he willing to go to keep Evie at his side? 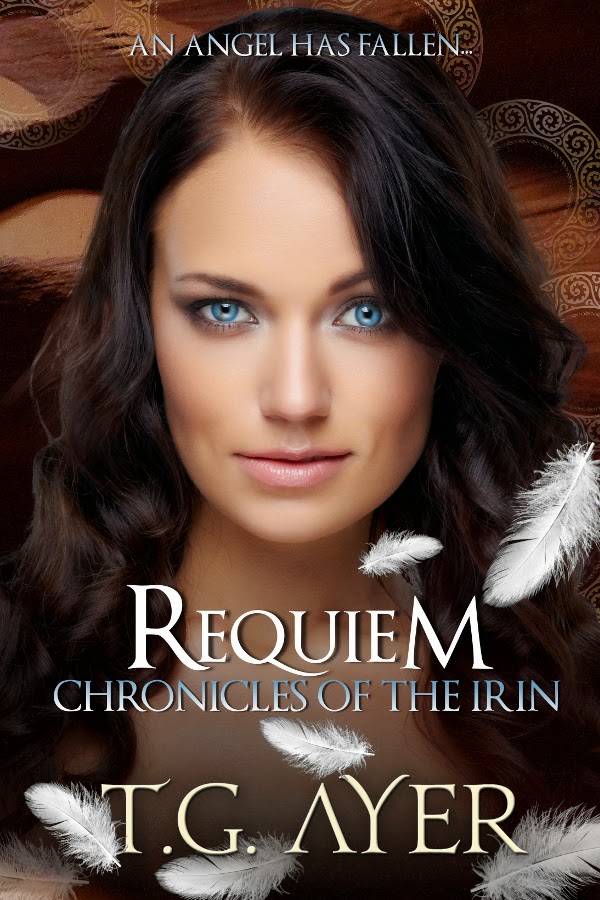 Title: Requiem
(Chronicles of the Irin, #2)

Two weeks to the Ascension Ceremony
Evie stared at her hands and wondered, not for the first time, why they didn't shine with the blood she'd spilled a few days ago. She flexed her fingers, turning her hands over to study them in the light of the blazing fire. Long lean fingers, neatly manicured nails. Elegant hands for a cold-blooded killer. Only the slightly darker calluses on the inside of her fingers hinted at the hours of weapons-practice, hours of using weapons to kill.
She was used to being the executioner, although never guilty of ending an undeserving life. Not until the insidiously evil Marcellus Bactor had taken over as the Master of the Brotherhood of the Irin. As a warrior under the Brotherhood she'd performed missions of charity, missions of freedom, and of course missions of death. But under Marcellus death had become the sole function of the Irin.
Breakfast had not appealed to her at all. She hadn't expected to feel so strange after dispatching Marcellus. He'd been running the Brotherhood, his own needs more important than those of the humans whom they were all meant to protect. And, now she knew he'd killed her guardian, Patrick, and robbed her of the only father she'd ever known.
And yet here she was, feeling as though she ought to receive some sort of punishment for murdering the Master of the Irin. And for the first time she wondered what the Brotherhood and all her fellow Nephilim were doing right now. Choosing another Master? Perhaps Daniel? She shuddered at the thought. What was that saying? Frying pan and fire.
She sighed and shifted in the sofa, moving her cheek away from the warm flames of the fire. Julian's study was warm and cozy, and modern. Unlike anything she'd ever expected to see deep within the bowels of the earth. Dark wood shelves covered the walls filled to overflowing with books from every age, in every language. Comfortable sofas in earthy tones were scattered around the space, convenient spots for curling up with an interesting read. She tossed her dark hair over her shoulder and away from the heat from the fireplace.
She smiled at the memory of Castor's reaction to Marcellus' death just hours ago. He'd barely blinked on seeing the bloody remains of their old Master. Not that she should have expected tears considering Castor had borne the brunt of Marcellus's fury when Evie had left Greylock Estate in search of the Underworld. Evie's stomach tightened when she thought of Castor's little home on the grounds of the estate. A place the half demon had loved, a place now burnt to ash. But Castor's woes didn't seem to worry him too much right now. He was being well entertained by Pollo and his eclectic band of servants.
Julian had gone off on an errand in a bit of a hurry; something about a volcanic eruption in the South Pacific. That left Evie to her own devices, which wouldn't have been so bad if she had not needed to worry about Persephone. Evie was constantly on guard where the cold-hearted goddess was concerned, what with Persephone having already tried once to kill her. But so far she didn't seem to want to repeat the attempt. Maybe she was concerned about what Julian would do to her should she succeed. Evie snorted. No chance she'd let her guard down though.
Evie's skin tingled and she glanced at the shifting letters tattooed into her skin. They seemed alive, twisting and writhing beneath the surface of her pale skin like living things. Something Evie was yet to get accustomed to. She studied the markings then returned her attention to the pages of the ancient book lying open on her lap.
A book of dead languages, scripts from a time long gone. Perhaps a source of information, perhaps a way to undo this curse that she'd brought upon herself. Twelve seals to make a god. Not a bad way to turn an angel into the King of the Underworld.
She suppressed another sigh and rubbed her forehead. Suddenly the room seemed to close in on her and she felt desperate to leave the confining comfort of the study. She'd been on edge for hours now. What she probably needed was a sparring session. Something she wasn't likely to get down here.
She shut the book and left it on the sofa, heading for the door on feet that seemed to think she was in a hurry to be somewhere. Outside, the cool air from the shadowed tunnels teased her overly warm cheeks. She glanced up and down the passage listening for the sounds of approaching feet or hooves. Nothing. Torches shone at both ends of the tunnel, their flickering yellow light dancing and reflecting against the ominous jagged black stone of the tunnel walls.
Evie let her feet guide her, although part of her knew exactly where they were leading her. 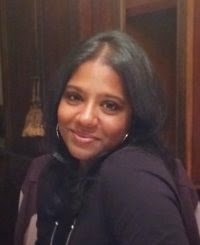 I have been a writer from the time I was old enough to recognize that reading was a doorway into my imagination. Poetry was my first foray into the art of the written word. Books were my best friends, my escape, my haven. I am essentially a recluse but this part of my personality is impossible to practice given I have two teenage daughters, who are actually my friends, my tea-makers, my confidantes… I am blessed with a husband who has left me for golf. It’s a fair trade as I have left him for writing. We are both passionate supporters of each others loves – it works wonderfully…

My heart is currently broken in two. One half resides in South Africa where my old roots still remain, and my heart still longs for the endless beaches and the smell of moist soil after a summer downpour. My love for Ma Afrika will never fade. The other half of me has been transplanted to the Land of the Long White Cloud. The land of the Taniwha, beautiful Maraes, and volcanoes. The land of green, pure beauty that truly inspires. And because I am so torn between these two lands – I shall forever remain cross-eyed.

These are the goodies that Tee is giving away. :-) How awesome is she? 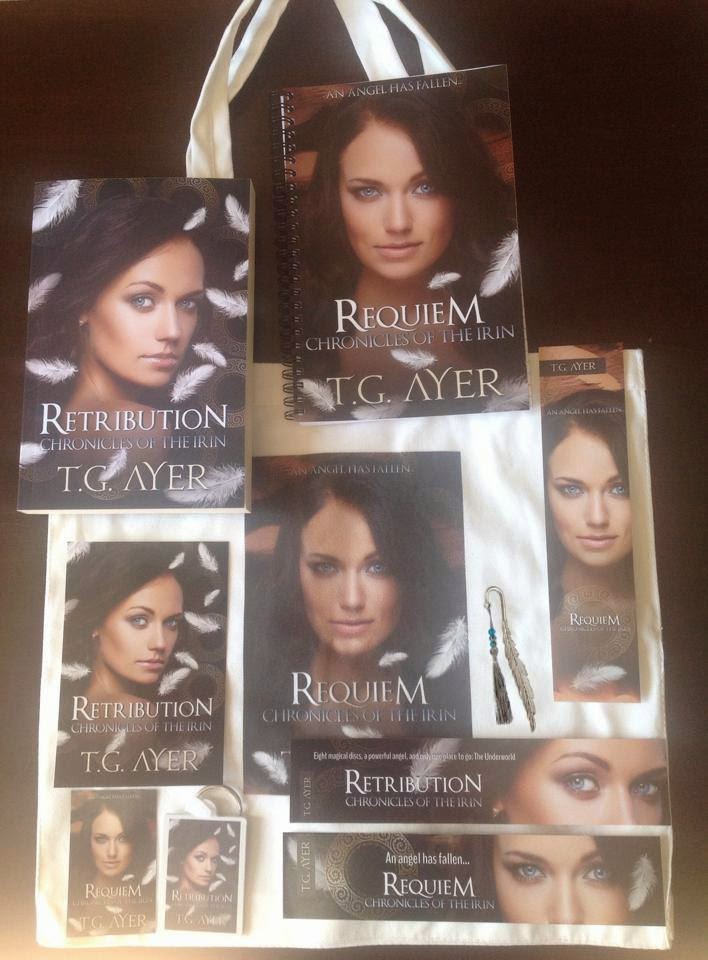 This is the one series of hers that I am really behind on. There just doesn't seem to be enough time and Tee is so energetic in her writing that she pumps them out quicker than I can keep track of. :P