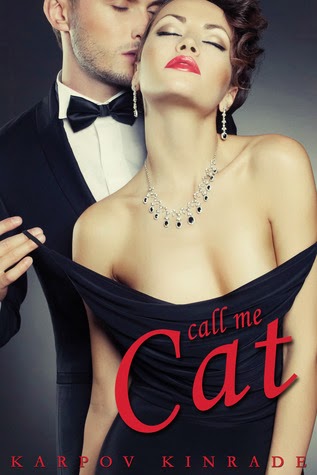 Catelyn Travis is a good girl who gets good grades in law school, doesn’t date and never gets into trouble.

But when a run of bad luck threatens to destroy everything she's worked for, she's forced to become Cat, phone sex goddess who fulfills the fantasies of her clients night after night.

When she meets Ashton Davenport the Third, bad boy biker billionaire, she knows to stay away. But when he calls her alter ego, Cat, she has no choice but to fall for the sexy stranger.

Now her life is spiraling out of control as she struggles to keep her two identities separate, but there's one person who knows her secret.

And he'll stop at nothing to destroy her, just like he destroyed her parents.

Threatened at every turn, her life crumbling around her, Catelyn must decide who she can trust, because the wrong choice could end her life.

You can purchase it from Amazon.

Karpov Kinrade is the pen name for the husband and wife writing duo of bestselling, award-winning authors Kimberly Kinrade and Dmytry Karpov.

Together, they write fantasy, paranormal, mystery, contemporary and romance and hook readers into new and exciting worlds that will leave you laughing your ass off, crying your heart out and falling in love.

Look for more from Karpov Kinrade in the Kiss Me series, Seduced Saga, the Forbidden Trilogy and more coming soon.

They live with three little girls who think they’re ninja princesses with super powers and who are also showing a propensity for telling tall tales and using the written word to weave stories of wonder and magic.

Call Me Cat was an adrenaline inducung, somewhat alarming, totally engrossing tale of Catelyn who experienced a horrific ordeal when she was fifteen and is now trying to make it through college alone.

She is between a rock and a hard place and decides to take a job as a phone sex operator to make enough money to stay afloat and be able to finish law school. It is really uncomfortable for her because she is a virgin and has never experienced any of the things that she needs to describe.

She meets Ash one night and keeps running into him. She is really taken with him.

Those two kept going hot and cold. One wanted the other and then would change their mind and the other one wanted them. It was a tad frustrating yet not.

There is a sinister force at work and I have an idea who is behind it, though I am not certain because the author is just that darn good at keeping us guessing.

This book had some humor, suspense, action, danger, innocence, creepy happenings, lots of sexy talk ;-), and some romance.

I was only slightly annoyed by some things being repeated here and there. Other than that, it was great.

I would emphatically recommend it to those of you who like gripping tales.

I received an ecopy of it in exchange for my honest opinion. It was fantastic and I can not wait to get my hand on the next two books!