VBT: Giveaway and Review ~ The Promise of Paradise by Allie Boniface 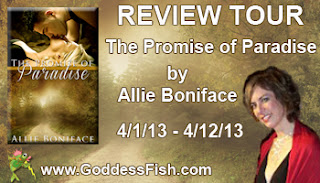 Harvard grad Ashton Kirk is headed for a promising law career when scandal breaks apart her family. To escape, she changes her name and rents an apartment in the small town of Paradise, New Hampshire, where no one knows who she is.

Ash hopes for solitude, but all bets are off when Eddie West, the town’s most eligible bachelor, moves in downstairs. The sexy auto mechanic loves his women and his cars shiny, sleek, and fast, and when he meets his new housemate, he wastes no time getting friendly. But Eddie is nursing his own recent loss, and the last thing he wants to do is let someone new into his life or his heart.

Can two people from different worlds find common ground and a place to fall in love? Or will Ashton’s past and Eddie’s scars keep them apart just as summer heat brings them together? Is it possible to find your soul mate in the place you least expect?

Near the curb, engine still running and rock music bellowing from the speakers, idled a red pickup truck. White and yellow flames danced along both sides. Bending over the tailgate was a broad, bare, definitely male back. Yow. No wonder Jen looked like she was about to start drooling. Even one floor up, Ash could trace the outline of nearly every muscle in his arms and back. A bright red and yellow king cobra tattoo curled around his left triceps. Wavy brown hair fell across the sides of his face. His jeans, faded in all the right places, sat low on his hips. Ash squinted harder and ran one hand over her hair.


Oh God. They still make men who look like that?

“Turn around, please,” Jen commanded under her breath. As if he’d heard her, he straightened up, biceps flexing as he hauled two large boxes from the back of the truck and turned up into the sidewalk. Her sidewalk. He looked up, and Ash’s heart dove into her stomach. A neatly trimmed goatee underscored a crooked nose. He flashed a smile and winked.

Jen nodded and jabbed a thumb in Ash’s direction. “She does.”

“I’m Eddie West. Movin’ in today.” It was hard to hear him over the noise of the truck’s humming engine and the music. Ash watched his mouth move instead.

Eddie shook his head. “Nah. I’ve just got a couple of boxes to bring in. The rest is coming tomorrow. But thanks.” He continued up the sidewalk.

Jen cupped her hands around her mouth and yelled down. “Come up later, if you want.”

Ash elbowed her. “What are you doing?”

Eddie backpedaled and nodded, grinning wider. As he disappeared from their view, the heavy front door creaked open and, after a few seconds, thudded shut behind him.

Jen straightened up. “See? I told you he’d be good-looking.” She rolled her eyes. “He’s beyond good-looking, Ash.” She fell back against the railing, hands to heart in a dramatic pantomime. “He’s perfect.” 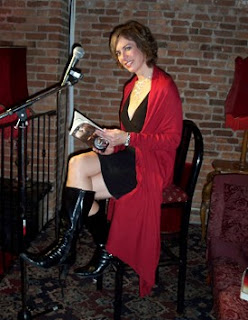 Allie Boniface is a small-town girl at heart who's traveled around the world and still finds that the magic and the mystery of small towns make them the best places to fall in love and find adventure. From the New England coast to Rocky Mountain hotels to tiny European bars, she's found more character and plot inspirations than she could ever count. Currently, she's lucky enough to live in New York's beautiful Hudson Valley with her own "Hometown Hero," a guy who can fix, build, drive, and grill anything and is the epitome of the strong and silent type.


When she isn't writing love stories, Allie is a full-time high school English teacher who gets a kick out of helping her teenagers negotiate the ups and downs of writing along with the ups and downs of life (because, really, she's still trying to do the same thing!). And while she'll continue to travel far and wide, Allie knows there's really nothing like coming back to the place where the people who have known you forever welcome you home with open arms.


**Allie will be awarding a $25 iTunes Gift Card to a randomly drawn commenter during the tour. **

The more you comment the better your chances of winning!

Here is the Tour Schedule.

This book had two main characters who were scarred and each had their fair share of secrets. It was a quick read and I enjoyed spending time with these characters.

Ash moved to Paradise to escape from heartbreak and scandal. She isn't looking for a boyfriend or a place to call home, she's just hiding out and taking a break from the drama of her real life.

Eddie is trying to get over his past and thought moving out of his parents house might be a step in the right direction.

Neither Ash nor Eddie expected to be sharing the house. But they got along well enough and became friends. Soon enough they are both entertaining thoughts about taking their friendship in another direction. The problem is they both have secrets and need to decide whether to trust each other with them or not.

This book had secrets, romance, great characters with issues, steam, a kitten, and a slew of emotional scenes  all wrapped up with a wonderfully fantastic ending. ;-)

I really liked Eddie! I mostly liked Ash except when she was wishy washy about how she felt about her ex.

I recommend this one to those of you looking for a romance with some complexity. No insta-love here.
I received a copy of The Promise of Paradise from Goddess Fish in exchange for my honest opinion. I honestly liked it a lot. I read it in one sitting!


*If someone you loved were involved in a scandel, would you run and hide or stand by them?*