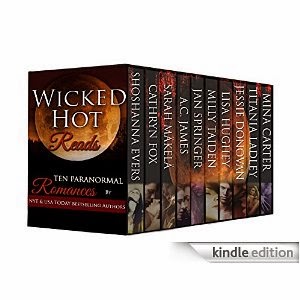 Indulge in nine sexy paranormal romance novels, written by New York Times and USA Today Bestselling romance authors. With shifters, vampires, demons, and otherworldly creatures all looking for their own forever-loves... this box set bundle will get you in the mood for a sensual Halloween!

The books in Wicked Hot Reads: 9 Paranormal Romances would cost over $26 to buy individually. Save $25 by getting the bundle for just 99c, for a limited time!

With her father's freedom at stake, Belle agrees to be the fearsome Beast's prisoner in his enchanted castle. Held as his willing captive, Belle must submit to the Beast's most primal desires to survive.

The Beast can't let his little Beauty go free, not while there’s still hope that she might be the one to end his decade-long curse...and with true love's kiss, return him to the Prince he once was.

Their story is one that begins with imprisonment -- he in his monstrous body, she in a dungeon -- but without this predicament, Beauty would never have met the Beast.

So we shall begin with what occurred on that fateful night when everything changed: when a lover was betrayed, a man deformed, and a castle shrouded in an enchantment...

Demon hunter Detective Michelle never thought she’d be working with a demon during her undercover assignment at a Canadian ski resort. Blake Ashen might only be half-demon, but he exudes full-demon charisma and lust.

Michelle needs to discover why so many women are going missing at the resort. She has no choice but to form an alliance with Blake, who is having a seriously strong effect on her libido. Forced to pretend they’re lovers, the two get up close and personal and Michelle begins yearning for a taste of him. In no time at all, the woman in her overrules the cop and she finds herself knocking on a demon’s bedroom door, where she discovers the man is far more potent than the demon.

But when Michelle discovers what's really going on at the resort, will her trust in a demon turn her into one of the missing, or will he save her from the real monsters?

Some magic can’t be unspun…

Meddling in magic…
If Mia Brooks could turn back time, it would be to when she used her fledgling magic to craft a potion for an injured werewolf. It nearly killed the Pack Alpha, and now the lives of her witch mentor, Jessa, and her soldier boyfriend, Ethan Parker, have been changed forever. Jessa is in hospital after a vicious werewolf attack. And Ethan, having been bitten, is becoming a werewolf himself.

A wolf at the door…
Mia can’t turn back time, but she can try to make things right with the two people she cares about most. She’s keeping Jessa’s shop, Eternally Magick, open, and she’s there for Ethan as his inner wolf grows. But, by the next full moon, his transformation will be complete. Can she really be the mate of a half-man, half-wolf living within the law of the Pack?

Under his spell…
Struggling to contain his new lupine senses, Ethan goes missing on active duty. When Mia realizes her werewolf lover has been abducted, she knows she must harness every magic power she possesses to get him safely back…

He can’t lose her…
Arie Cush wanted Holly from the very first moment he met her. A night at the Hellfire Club (HFC) is filled with old friends and new danger. The long-standing feud between the faeries that run the Chicago Crew and a lethal toxin puts Holly and other fledgling vampires in danger. Can they stop a vampire-fae war that’s been brewing for nearly a century?

Holly Ellis is still adjusting to their relationship and her new supernatural gifts. She never figured on another battle and she certainly didn’t count on a war. Despite the synthetic threat that could hurt their kind, Holly has been waiting for answers her entire life. She finally gets them when her godmother helps her discover even more about the family she never knew. But is there more to Arie’s past? And who exactly is the mysterious T, anyway?
Bared to Him
by New York Times Bestselling Author Jan Springer

Human by day, and a tentacle shape shifter by night, Gray Wagner is the last male that Miranda Bolton would ever dream of falling in love with. He’s an irritating, arrogant male who teases her to no end. With a human father and an Octo mother, Miranda knows she has a good chance at becoming a tentacle shifter just like Gray. When she can’t stop fantasizing about the sexy well-hung male, she knows she’s about to enter the Change. Suddenly Gray becomes the only male she wants to mate with, and she’ll make sure she gets what she craves…

Alaskan custom boat maker, Gray Wagner, promised Miranda’s dad that he would keep his daughter safe during their week-long ocean voyage to attend a mutual friend’s wedding in California, but Miranda’s succulent scent is driving Gray to distraction. He knows he shouldn’t be thinking about doing all the dirty and delicious things he wants to do to her, but all his promises to Miranda’s father disintegrate when Miranda shifts and Gray goes primal…

After an explosive night of passion during a scenting ceremony, Karla Alves is sure she was just a one night stand for the man she'd been crushing on for years. She teased him and pleased him, and Nate hasn't been around since. Her fear of becoming clingy kept her from risking her heart and asking for more than a few hours of skin sin.

She. Is. His. Nathan Wolfe marked Karla. His mate. Deeply involved in pack politics, Nate has had to stay away. When his sister warns that Karla needs him more than he thinks, he'll discover a bundle of secrets only his wolf can sniff out. But getting the woman he cares about to let down her guard may prove to be his undoing.

With Karla's wayward sister wreaking havoc and friends needing more of his time than ever, Nate will have to rearrange his priorities if he ever hopes to earn Karla's trust. But will time with her be enough? Only true love and a wolf's promise can hold together a relationship created with a bite, a scenting, and a hope for tomorrow.

Angelina Guerisse has too many responsibilities -- kids, sister, grandmother, an ex-husband, and not enough time. The only respite from her overwhelming life is in her dreams with a stunningly hot angel. But when the angel from her dreams shows up in real life, claiming she is descended from a line of matriarchal healers and possesses a rare healing gift, she's not interested in another obligation.

Raphael, the Archangel of Healing, has a problem. He lusts after an intriguing and totally off-limits Angel. Every moment he spends with Angelina is an exercise in torture, and getting the overworked, hard-headed Angelina to accept her destiny proves harder than anticipated….

Until an unexpected threat puts both the Angelic Realm and the Earth in jeopardy. But will it be too late?

Blaze of Secrets (Asylums for Magical Threats)
by Jessie Donovan

Kiarra Melini overhears the dangerous secrets of her blood and decides that if Feiru elemental magic is to survive, she needs to die. However, before she can finish the deed, a strange yet determined man shows up in her cell, throws her over his shoulder, and carries her right out of the prison for elemental magic users.
Jaxton Ward is ordered by his superiors to train the stubborn elemental fire user he rescued. There’s only one problem–she claims her magic is gone and he has no idea how to train a woman who spent the last fifteen years inside a prison cell. He’s determined to keep his relationship professional, but as the danger amps up and they’re forced to go on the run, he starts to fall for the newly confident woman who ignites his temper like no other.
Kiarra’s final secret is the key to them staying alive, but can they outrun the prisoner enforcers long enough for her to embrace her unique magical talents and finally learn to love again?

Mark of the Serapath
by Titania Ladley

Dr. Myles Calhoun can’t bring himself to follow orders to assassinate his neighbor, even though the sexy hellcat has the power to destroy his Kynthian vampire race. Josie sizzles his vamp’s blood and revives his lust for life, despite proof of her ancestry—the crimson birthmark.

The mark of the Serapath.

When a single catastrophe unleashes Josie Markum’s Serapathian witch powers, she suspects the dark and breathtaking Myles is the enemy—a Kynthian bound by an ancient order to slaughter her people at all costs.

Yet despite the risks, fierce passion explodes between them, threatening the existence of the entire world.

What do you think? I've read two of these books and they were book really enjoyable.

Have you read any of these? Will you get this boxed set?

Here are the purchase Links: