Review and Giveaway ~ Fixed On You by Laurelin Paige 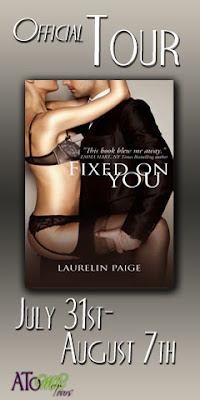 Stalking and restraining orders are a thing of Alayna Pierce’s past. With her MBA newly in hand, she has her future figured out – move up at the nightclub she works at and marry the manager, David. He’s perfect for her because, although he’s attractive, he doesn’t get her all turned inside out and upside down like some other men have. It’s a safe plan, one that assures she’ll remain in control of her obsessive love disorder.

But what Alayna didn’t figure on is Hudson Pierce, the new owner of the nightclub. He’s smart, rich, and gorgeous – the kind of guy Alayna knows to stay away from if she wants to keep her past tendencies in check. Except, Hudson’s fixed his sights on her. He wants her in his bed and makes no secret of his plans to seduce her. Avoiding him becomes impossible after he offers a business proposition Alayna can’t turn down and she’s drawn further into his universe, unable to resist his gravitational pull.

Soon Alayna’s charmed by Hudson in every way possible and the control over her old behaviors slip. When she learns Hudson has a dark history of his own, she realizes too late that she’s fallen for the worst man she could possibly get involved with. Or maybe their less than ideal pasts give them an opportunity to heal each other and finally find the love their lives have been missing. 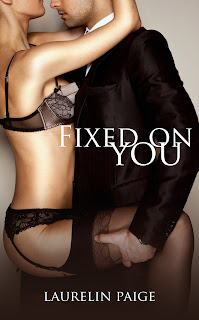 Title: Fixed on You

Laurelin Paige is a sucker for a good romance and gets giddy anytime there’s kissing, much to the embarrassment of her three daughters. Her husband doesn’t seem to complain, however. When she isn’t reading or writing sexy stories, she’s probably singing, watching Mad Men and the Walking Dead, or dreaming of Adam Levine. She is represented by Bob Diforio of D4EO Literary Agency.

Wowza! This book is hot and is another perfect addition to your What to read after Fifty list. ;-) In other words this is another book that I'd recommend only for adults.

The two main characters are both riddled with issues. Hudson is our typical uber rich, good looking, domineering hero. He sees Laynie at a college function and is taken with her.

Laynie doesn't see him at the college but meets him while working at a bar one night. She doesn't realize that the man she's flirting with is her new boss. He has a proposition for her. He has a special type of job for her if she wants it. In return he'll pay off her student loans. I won't say whether or not she accepts (you'll have to read it for yourself). ;-)

I was enthralled with this emotional sizzler pretty much the whole way through the book. I had a hard time putting it down.

I would recommend this to those of you who like Fifty Shades of Grey, Bared to You, etc... In fact, Fixed On You reminded me of those books periodically through out the pages.

I received an ecopy of this book in exchange for my honest opinion. I thought it was great. I am very, very eager to read the next book in the series..