Philadelphia Series Box Set - In My Arms, A Part of Me, and Out of My Element, by Taryn Plendl ` giveaway and review 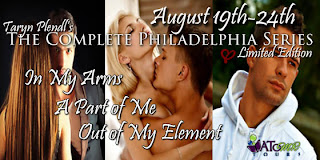 
New to the Philadelphia area, Trevor is instantly taken with Ava's beauty and witty attitude. After sharing an unexpected but amazing kiss, Trevor manages to stick his foot in his mouth and watches as

Ava walks out of his life before he has a chance to explain.

When the two unexpectedly cross paths again, they struggle with the undeniable chemistry between them. Ava fights to keep it platonic, afraid to get hurt again, as Trevor sets out to change her mind.

With a little bit of humor, a lot of drama, sexual frustration, dancing and plenty of alcohol, Ava realizes that Trevor just might actually be perfect for her.

Tom and Talia aren't strangers. They've been walking a tight rope of attraction since the day they met, but after an accident rocks Tom's world to the core and changes it forever, he spirals into a free fall of emotions. No longer the laid-back, happy guy, he now worries that he will never be enough for Talia.

After all, who could possibly love such a broken man?

Talia is a tenacious ER nurse by day and a fun-loving loyal friend and party girl by night. Her developing feelings for Tom are put to the test after his accident as she fights to break through his walls and show him how much she cares, even as he continues to build them back up, determined to keep her out.

As Talia tries to take care of Tom, stronger feelings emerge for both, and neither of them will come out untouched. Everything they thought they knew about themselves and each other will be put to the test as they finally realize it isn't important how many times you fall down, but only how many times you get back up.

"We are playing an entirely different game, Nick. While other girls might wait patiently
until you breakup with your many girlfriends, I can't. You see, I have been waiting all my life for something real. And if this isn't real, no way am I spending another hour on waiting."

Nick has never allowed himself to get attached to a woman. While his friends were settling down, he was having the time of his life, a womanizer with a heart of gold. Right up until Chelsea came into his life. He was drawn to Chelsea from the first time he saw her ... well, actually it might have been the second time, but it didn't take Nick long to realize he might be over his head and completely out of his element.

Chelsea wrote Nick off after their first encounter, but soon she realizes she has found a good friend in him.

Falling for Nick was never Chelsea's intention, but sometimes even the best intentions prove to be out of your control.

The closer Chelsea and Nick get, the more they push seem to make a mess of things. Can Nick figure out how to have a healthy relationship before he loses Chelsea forever? 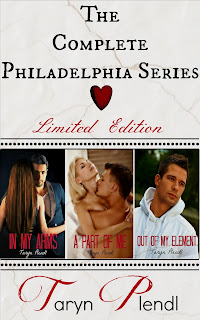 Title: Philadelphia Series Box Set- In My Arms, A Part of Me, Out of My Element

Genre: Contemporary RomancePurchase it from Amazon

I am a wife to my soul-mate, loving mom to two girls who have the amazing ability to make me both laugh hysterically and want to pull my hair out within the same five minutes, and mommy to a fifteen year old rescue dog who is thirteen pounds of pure man!

I'm an autism advocate, dreamer, and Indie Author of Contemporary Romance. I believe in "Happily Ever After", living vicariously through my books.

Instead of turning into a pumpkin at midnight, I turn into an author, creating my stories when the house is quiet. I read at least three books a week and know every Disney Junior theme song, and can belt them out with the best of them.

There are three books in this series and in the collection you get to read them all. :-) This series is based on a group of friends in the (you guessed it) Philadelphia area.

In the first book we meet Trevor and Ava. He is a sweetheart and all around nice guy. :-) Ava has been hurt and puts poor Trevor through a workout in order to be with her.

In book two, the focus is on Tom and Talia.

Tom is the quiet and reserved member of the group. He has an accident one night and then he has trouble dealing with the after effects.

Talia is an emergency room nurse and is used to dealing with trauma. She feels guilty when she finds out that the patient they were working on was Tom and she didn't realize it.

Each of them have doubts. Add in a few misunderstandings, and it becomes a question of if they will ever get out of their own way in order to be together.

This book had a lot more depth and emotion. I cried a few times.

The third book is mostly about Nick and Chelsea. Nick is the playboy of the group and it doesn't take Chelsea long to figure that out.

He has never had a friend of the female persuasion. He never really wanted to but where Chelsea is concerned, not having her friendship is unacceptable.

It was great watching this player find his match. ;-)

I thought Nick was a little childish when he got upset with Chelsea for doing what he said was okay and handled it horribly.

In the end I liked all three stories. They had great characters, romance with a helping of sizzle, and realistic storylines.

If you like romances that have more than one book where the characters make recurring appearances, then I'd suggest you check these out. :-)

I received an ecopy of this collection in exchange for my honest opinion. I really enjoyed it especially book two.