Levi might be hot, strong, and have a cool set of wings, but it's not enough to make up for keeping Allie in the dark.

Allie's tired of being left with more questions than answers. She's tired of loving a guy who refuses to level with her. Most of all, she's tired of her life spinning out of control.

Desperate to save Jess no matter the personal cost, Allie has to face the possibility that the only one she can trust is herself.

You can purchase it from Amazon, B&N, or Smashwords. 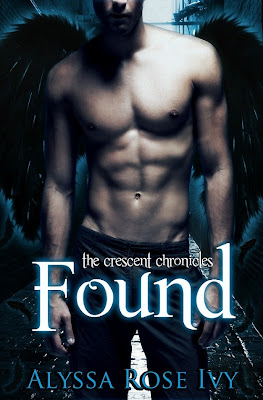 Jared shook his head. “At least you trust him again.”

“Shouldn’t I trust him?”

“As it should have. He didn’t deserve easy forgiveness.”

The blonde glared at me, clearly getting the wrong impression about us. I just smiled back at her.

“I bet you’re still getting him to make it up to you.”

“Dare I ask what you’re implying?”

“You know exactly what I’m implying. I know about your challenges.”

“What!” I said it louder than I meant to.

“What’s the problem?” He grinned from ear to ear.

“Levi told you that?” I could barely breathe, I was so mortified.

“He’s dead. He’s absolutely one hundred percent dead.” I gritted my teeth. If Levi had been within arm’s reach, he’d have had a red mark on his face in the shape of my hand.

“Come on, Levi tells me everything. It’s not a big deal.”

“Not a big deal? I hate you both.” I picked up my laptop and tote bag and moved over a few seats.

Of course, Jared followed and he was laughing. “Do you think I care? I’m just glad you’re finally giving Levi some. He was such an ass when you were holding out on him.”

I turned around. Some nerdy looking guy behind us was watching us with interest. I faced forward again. “Shut up. Not another word.”

Thankfully, the professor came in. I’d never been more interested in aromatic hydrocarbons before.

Class went by at a snail’s pace, but it gave me time to calm down. Or so I thought.

“Are you still mad?” Jared asked as he followed me out of the room.

“What do you think?”

“No, but your buddy did.” I still couldn’t believe Levi would humiliate me like that. What else was he telling his friends?

Jared laughed again. “Please don’t make a huge deal out of this. Who cares that you like sex with him transformed and your favorite position is—”

I pushed him. “Don’t say another word to me. Not one word.”

I pulled out my phone and texted Levi. You are in so much trouble.


Alyssa Rose Ivy is a New Adult and Young Adult author who loves to weave stories with romance and a southern setting. Although raised in the New York area, she fell in love with the South after moving to New Orleans for college. After years as a perpetual student, she turned back to her creative side and decided to write. She lives in North Carolina with her husband and two young children, and she can usually be found with a cup of coffee in her hand.

You all know how excited I've been to get my hands on this book. :-) I was not disappointed! I was lucky enough to get an Arc so I was able to read it early. :D Thank you Alyssa!

Let me start by saying this is the third and final book in the crescent series. :-( I would advise reading them in order. You don't want to miss a moment! I have attached links to the titles so that you can read my reviews for the two previous books, the blurbs and find the important links as well. Flight is the first book in this series and Focus is the second.

This book was a whirlwind of action and romance. There was so much going on that it kept me on the edge of my seat. At the end of Focus Allie was worried about Jess.

In Found, Allie's still trying to find a way to help her friend while dealing with her other issues as well. Levi has her being guarded at all times and it is driving her crazy. Being with Jared too often would have that effect on anyone, right? lol!

I was happy to have a good bit of Levi and Allie banter. :p There was one scene that was super sweet between the two of them. We find out something about Allie with the help of Levi's grandma. She was a hoot in a sometimes vicious kind of way!


I kept wondering what Allie had ever seen in her ex-boyfriend Toby but by the end of the book he mostly redeemed himself.

Allie finds herself in trouble again. Luckily she has some back up this time, maybe not enough, but she'll figure out something. She always does.

I can't lie. I am sad that this series is over. I hope that maybe I'll see Levi and Allie again in the future.

I recommend this whole series to everyone who likes shifter books. These are like nothing you've ever read! The are a completely different type of shifter. :-)

I received an ARC of Found in exchange for my honest opinion. No surprise, I loved it! If you haven't discovered this series for yourself, then you are missing out on a wonderfully terrific series.

Just so you all know, Alyssa is creating a spinoff series. I am delighted!