Review and Interview with Nikki Rae author of SUNSHINE 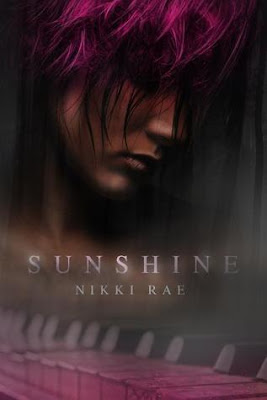 I had the opportunity to interview Nikki Rae. :-)

Here is what she had to say:

Do you have to concentrate and visualize the story or do ideas just randomly come to you when you're out and about?
Both! When I’m first starting a story, things will tend to float into my head. Bits of conversation, how a character looks, what they’re like/what their history is. But when in the process of writing the entire book out, I sit and think about it a lot until the scenes are as real as they can be.

What part of writing do you find the most challenging? most enjoyable?
The most challenging thing is how lonely you can get sometimes. For me, writng is a solitary thing. I spend at least eight hours a day on a story when I’m knee deep in it, and I lose touch with the real world sometimes. That’s probably the thing I love most about it too. : )

Out of all the books you've read, if you could live in one of them which would it be and why?
I’d like to live in Neil Gaiman’s The Graveyard Book. Talking to ghosts and living in a graveyard seems kind of nice to me.

What are you working on and when can we expect it to be out?
I just finished the second book in The Sunshine Series, Sun Poisoned. It came out June 28th! Now I’m working on the third book, which I’m aiming to have done by January or February of this year, as well as a spin off book that contains a few characters from Sun Poisoned, which will come out possibly next summer. : )

What or who inspires you?
People. There are so many different kinds of people, so many situations they go through, so many ways to overcome or stay the same. Just watching how people react to certain things is usually enough for me to get going.

What is your favorite color?
Black. Well, black isn’t technically a color…so…purple?

Which books have been on your tbr shelf the longest?
Oh man. I have a tbr BOOK CASE. I think the one that’s been on it longest is Lolita. I really LOVE it, I’ve just had it for so long that I read parts of it, forget I was reading it, and then never finish it.

What is your favorite past time?
Besides writing? I like to read, drink tea, find some animals to pet.

What is your favorite flower?
Hmm…I don’t think I have one. I guess you can’t go wrong with giving me flowers. : )

Thanks for taking the time to answer my questions. :D

18 year old Sophie Jean is pretty good at acting normal. Sure, she’s not exactly happy, but happiness is nothing compared to being like everyone else. She can pretend she’s not allergic to the sun. She can hide what her ex-boyfriend did to her. She can cover up the scars she’s made for herself. Ignore anything. Forget anything. Then Myles enters her life, and he has more than a few secrets of his own. When accident after accident keeps happening to Sophie, she can’t help noticing that he’s everywhere. That he knows too much. That she’s remembering too much.

It’s one thing covering up her own dark past, but does she really need to worry about people finding out just how much Myles likes her? Or that despite how much she doesn’t want to repeat past mistakes, she kind of likes him back? Not to mention the fact that she now has to conceal that Myles drinks blood-that he says he’s about four hundred years old.

She almost forgot about that part.

But Sophie has no plans to ruin the normal life she has created for herself. She can deal with this little glitch, no problem. Even if word has gotten around to the wrong vampire about Sophie and Myles, even if she’s putting the few people she loves at risk. Suddenly, those who were monsters before are just people, and the monsters? They’re real. Now being a normal human being is the least of her problems. Now she has to stay alive.

You can purchase it from Amazon / B&N / Smashwords.

It was only 99 cents when I was finding the links to post. :D

Nikki Rae is a student and writer who lives in New Jersey. When she is not writing, thinking, or reading, she is most likely hanging out with her gecko, Neil Gaiman, drawing in a quiet corner, or drinking tea by the gallon. Sunshine is her first book.

Just so you know, the second book, Sun Poisoned is also available.


You can purchase it from Amazon, B&N, or Smashwords.

If you had a sun allergy, would you miss being out in the sun?

Well let's start with the cover. I thought it was very striking and I really liked it. In that respect the old saying is true. You can judge this book by the cover. I was just as impressed by the content as I was by the cover. It was hard for me to believe that this was Nikki's first book.

I liked all of the characters except for Sophie's mom who has serious issues.

This was a new twist on vampires. :-)

I really am looking forward to finding out what Michael was talking about when he said it was all about her. Oh the suspense is killing me!

In this book you will find a magenta haired girl with a severe sun allergy, a mysterious new kid in town who befriends the previous mentioned girl, a set of twins who have very interesting names, a psycho mom, a horrible ex boyfriend and his super perky, skanky, witch of a girlfriend, a love for music, some secrets, some bad circumstances and a very old, very evil vampire named Michael too.

There was some romance, mystery, and action in Sunshine.

I was engrossed pretty much right away and read through until the end. :-)

I would recommend this book to everyone who likes vampire books.

I received an ecopy from the author in exchange for my honest opinion. I really liked it alot.