Princess Ashley wants to break the constraints that keep her from her mate's love. She exchanges her help for a chance to escape, and win his love.

PRINCE OF VEZUL: TALLEN Royalty of Vezul Series, Volume 1 by C.A. Tibbitts
Tallen, which happens to be a prince from the planet Vezul, comes to Earth seeking a woman to become his princess. He lands just outside Las Vegas, where he spies a buxom beauty named Cari. He comes to her aid when a casino patron gets a little too grabby with Cari, whom he has already decided will be his princess.

Will an interspecies relationship actually work, and does love truly conquer all?

A Witch's Hearts Desire By Darlene Kuncytes
Serena St. James was a witch who was completely content with the life that she had carved out for herself. She never expected fate to rear its ugly head and knock her right off of her feet! When the utterly delectable Dante Marx saves her from being run down as she walks home from her shop one evening - her life will change forever.

Can these two fight the attraction that snaps and crackles between them long enough to focus on the task set before them? Can they survive the evil that doesn't want it to be found?

The Dragon's Demon By Jami Brumfield
"Being a princess is a pretty amazing job, that is, unless you’re a princess of the Underworld. Alleyah “Lee” Jenkins is the daughter of Hades and a human woman, Joanna. Her birth left her an orphan in the human realm. When she hit adolescence, she came into her succubus powers and learned the truth of her birthright. She was destined to marry a demon prince and together they would rule the thirteenth level of the underworld. She had different plans.

Guarded Hearts, (The Royal Guard) by: Bryce Evans
Lilly Laurent has a dream to become the first woman of the Royal Guard. She has read the rules and practiced for years. Unfortunately, the Prince of Wolves has other plans for Lilly and being a member of his guard isn't one of them.

Prince William Asher, AKA "Knox" can't say or do anything right around Lilly. He has one final shot to win her love and get her back so she can accomplish her dream. Can the two of them agree and have a future together or will others destroy what the fates have brought together.

Among Mortals Series By Moira Keith
War broke out among the Norse gods unlike any they'd ever seen before. With their future in jeopardy, the Norns took the youngest from each bloodline and hid them among the world of Midgard. War raged on, slowly destroying each of the Nine Worlds, and the descendants of the gods are in trouble. Can they be found and returned to their homes before it's too late and the Nine Worlds collapse?

Purple Sage The Wedding Joann H. Buchanan
A fairy kingdom divided between the Light Fairies and the Dark Fairies. The Oracle predicted a long time ago that the two kingdoms would unite. So to keep the peace both kings decided to form an alliance by having their two heirs marry. Princess Sage wants nothing to do with a wedding so she runs away and meets a Light fairy who makes her heart swoon. After speaking to this unknown man, she decides to head back and fulfill her duty. Will she find love waiting for her at the end of the aisle or will Sage be cursed to spend the rest of her life without true love?

Phoebe: A 'Not-So' Phoenix Love Story by Julia Mills
From pauper to princess to prisoner in forty-eight hours is a lot for anyone to handle but she’s Phoebe O’Byrne, dammit!

Phoebe thought her life had finally gotten easier, that she’d found her purpose. All she wanted to do was celebrate passing the BAR…then Grant Hollingsworth strolled into her life.
Now up is down, in is out and people think they can turn into birds! Stop the world Phoebe wants off!

Princess Cilia’s Brilliant Stallion; By Marissa Storm
The Princess obsessed with her horse, But can Prince Phillip, win her heart and hand?

Heart of the Shadows Billie Jo Hanlin
On a routine goodwill mission to a neighboring planet, Princess Perinessa Amaletta's ship is boarded by pirates. In a vicious plot to get even with her brother, she is kidnapped and everyone on board is killed. Using only her wits, she escapes once they reach the space station, Fargone. While in hiding, she falls asleep, only to awaken far from Fargone on a ship owned by a man most considered cold and ruthless--a man her brother has tried to take down for years. Has she gone from one bad situation to another? 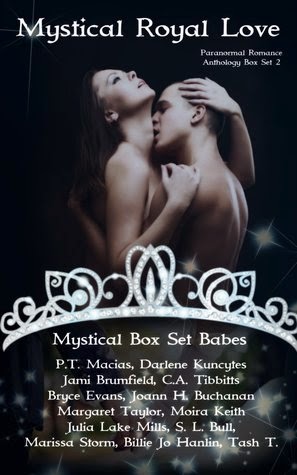 What a great mix of stories! Most of these authors were new to me. I am very happy that I had a chance to read this. :D

As with all anthologies, some of the stories were quite short and others were a little longer.Some were sexier than others and some had a tad more suspense or a little more action.

Overall, this was a great mix and I enjoyed them all even though I did have favorites that I liked more than the others.

My favorites (in no certain order) were:

This is a great set at a great price. You are sure to enjoy most of these book if not all. Grab yours today!

I received an ecopy in exchange for my honest opinion. Even if some of these authors are unknown to you as they were to me, take a chance, you won't regret it!