They created the game but eighteen year old Nicholas Grayson mastered the rules.

They are young and entitled and utterly bored with their lives, so they play games to entertain themselves. They call it the “bet” and new girl Ellie Holbrook is their latest target. Ellie is not the kind of girl Nicholas dates, but she is pretty enough to be his next conquest and so he sets out to seduce her and claim a nice little prize at the end. But her seduction proves difficult when she openly rejects his advances. In his dogged pursuit of her he slowly finds himself in her small circle of trusted friends and meets her two year old daughter, Sophie.

Life takes a startling turn for Nicholas when he realizes his happiness now lies with the young mother and her daughter. Falling in love with Ellie isn’t something Nicholas ever thought could happen to him and he’s completely frightened at how fiercely she makes him feel. But before he can further examine those emotions and clearly process them, enemies from Nicholas’s personal circle of friends conspire to tear them apart and he must now decide whether their love is worth saving or allow his friends to take away the greatest thing that’s ever happened to him. 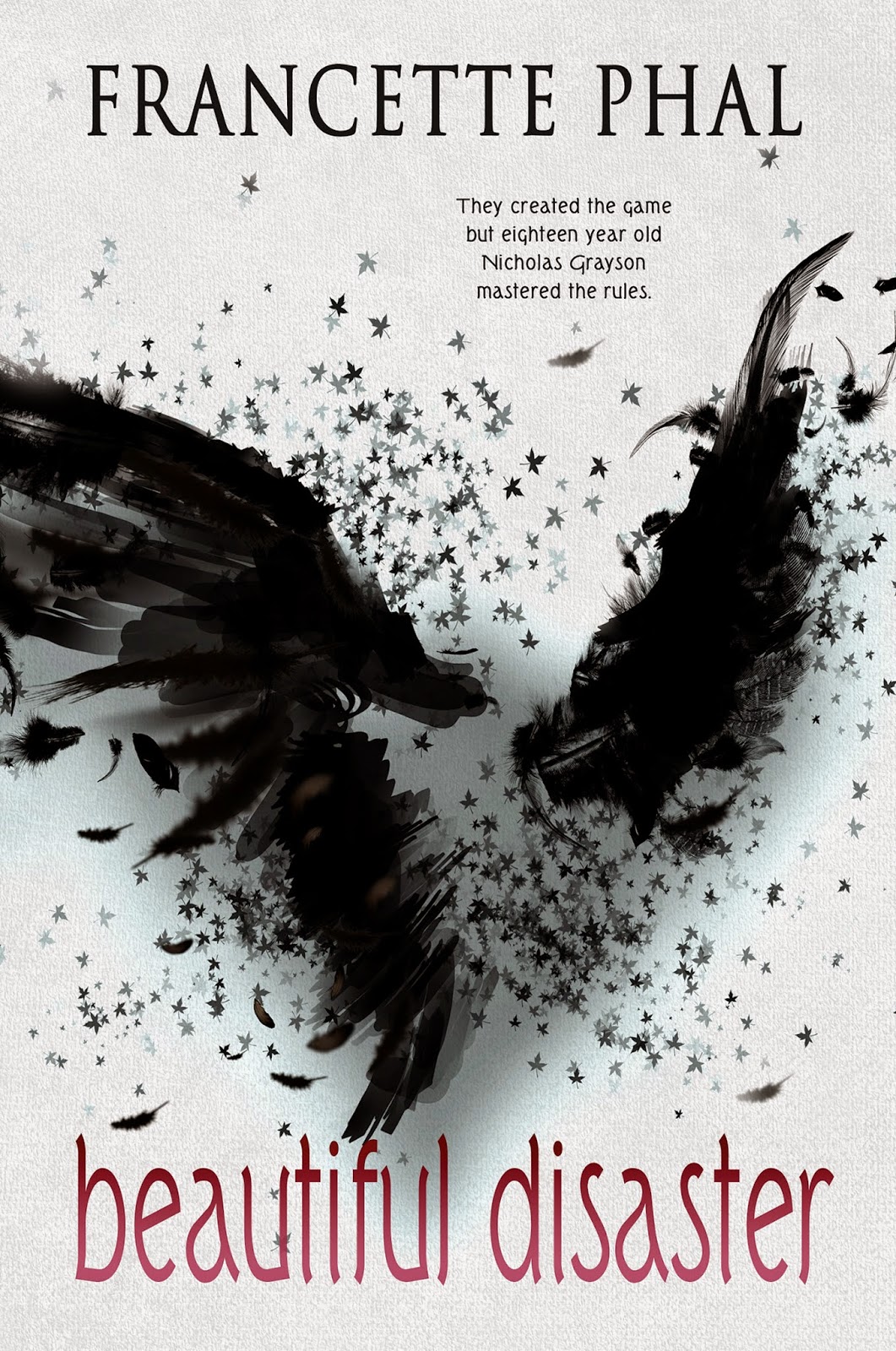 Nicholas Grayson wasn’t a nice person. In fact one could call him an asshole and he wouldn’t dispute it. He was as jaded as they come, eighteen years old, with a moral compass fixed permanently on diabolical. He was an emotional cripple with the personality of a cactus. He understood his faults and embraced each one with gusto.

His goals in life were to piss off his parents, break a few laws and generally screw his way through life. He was a good looking kid, born with movie star looks, a little James Dean with Brando’s swagger thrown into the mix to make the female populace of John Edgar High swoon.

He was fully aware of his power over the fairer sex and he used that knowledge for his own selfish end.

It was a game his group of friends played and Nicholas excelled at it. He’d slept with nearly every girl on campus, seduced each and every one with practiced ease that had become second nature, like breathing.

The sex was initially meant to stave off boredom; another vice to add to the growing list of evils he’d accumulated over the years. But then, like all things in his life, sex had become nauseatingly easy to obtain.

“Nicky.” The breathy call of his name had Nicholas peering over his shoulder where Maddie Tate, “Fatty Maddie,” as she was known by many in his circle, looked at him with sickening adoration.

Lounging across his king sized mattress in post-coital bliss, she looked every bit the sated lover with her tousled cinnamon red hair, flushed face, and gleaming azure eyes. She was in love with him. Had been for quite some time now and would undoubtedly do anything he asked of her.

It would take nothing to manipulate her and bend her to his will. Nicholas was sure that she would follow him. Therefore the seduction of Maddie Tate hadn’t taken much doing. The fact is Nicholas had been feeling charitable at the time. She was just another notch in this game he’s come to master; another pawn to use and discard when he was finished. He’d made a video of all their sordid acts just as he always had done and stood to win five hundred dollars for his troubles. Chump change as far as he was concerned but a win nevertheless.

“N-Nicholas…,” the voice was little hesitant this time. He heard the rustling of sheets as she rose.

“Get out.” This was the part he relished the most. Devil that he was, he caught the hitch of her breath and reveled in it.

“I…um…did I do something wrong?”

He took a moment tinkering with the camera before turning to give her his undivided attention, mouth curling into a bastardized version of a smile. “Well.” He moved with effortless grace, swagger unmatched, open and welcoming in contrast to the calculated, almost predatory look in his diamond grey eyes. “You didn’t bore me completely.”

Her face crumpled. The ensuing expression nearly heartbreaking as tears welled. If he cared he would’ve felt something other than this deep rooted annoyance and sudden need to see her out of his bedroom. “Now, please get your shit and get out.” It didn’t take long after that. Shoving him aside with surprising strength she gathered her things and was out like a shot.

Now, Nicholas figured, she’d grow to hate him like so many of the others who’d come before her.

It was what he did best. Fuck ‘em and leave ‘em. He lived by those words, using a slightly different variation out of the bedroom.

He was his father’s child after all; he had learned about screwing people from the master himself. Grabbing the half emptied bottle of whiskey from his dresser Nicholas made his way to the balcony in his bedroom. He took a mouthful, and then another, feeling decidedly better as each swig burned a warm path down his throat. Maneuvering himself over the balcony’s ledge he sat precariously over the edge, legs dangling four stories over the gleaming pool below. A deprecating smile tugged at his lips and Nicholas knew his demons were not far. He could hear the menacing gait of their hooved feet making a steady trek to the forefront of his mind, carrying with them memories he would sooner forget. 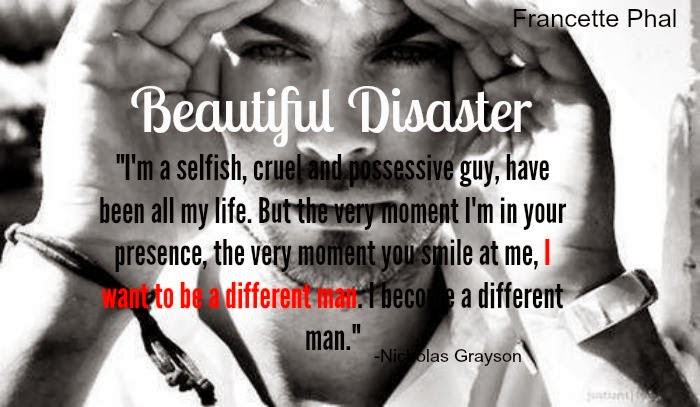 
Francette lives in Massachusetts with her amazingly supportive husband of ten years and her darling two year old son. Reading amazing books has led her to writing and she’s dabbled in fan-fiction before self-publishing her own works. She’s constantly thinking up new stories to write and does her best work when music is playing in the background. Romance is where she’s most comfortable but she hopes to one day venture in mystery novels. She has a weakness for coffee ice cream, tropical fruits and a good glass of wine. 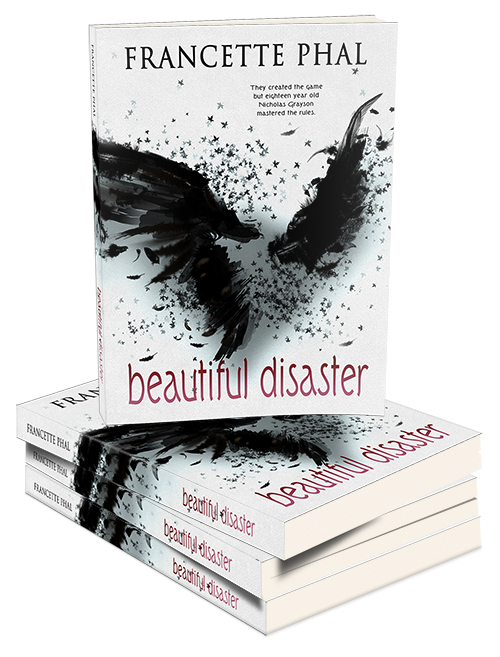 I was hooked by the blurb thinking that the book sounded like it had great potential. I couldn't walk away but there were many times that I wanted too.

The book started out interestingly enough. At the beginning I loved Ellie. She lost much of my respect when she finally did fall for Nicholas.

There were so many mean and despicable things that happened. There was drug use which I deplore, lots of female stupidity revolved around the same men and resulting in unfortunate outcomes, and a confusing and unhappy ending.

I was left wondering if any of the words that Nicholas uttered through out the whole book where true. I can sum up the book in one word ~ Huh?

It was entertaining and gripping, edgy, warped, infuriating, overly emotional, and wrong in so many ways that you will be sucked in too.

I received an ecopy of this book in exchange for my honest opinion. I was consumed by this book. It left me angry and wanting yet craving for more. There is another book about their relationship, Redemption.  It takes place 10 years later. Why ten??? I have no idea but I will probably read it when I get a chance because this book has crawled under my skin and I need to know how it gets resolved.