Review & Giveaway ~ Life in the Palace by Catherine Green 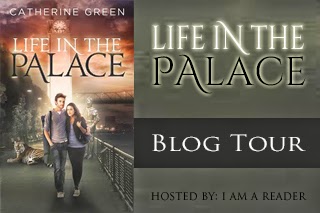 Life in the Palace by Catherine Green

“We need to talk,” Tal said. Then I knew it was going to go badly. ‘We need to talk’ is the conversational equivalent of walking into your basement without turning on the light, on a dark and stormy night, when a known psychopath is on the loose. You might as well cut to the chase and slit your own throat.

Chloe Diaz assumed three things: that when Tal said that she was one of The People sent from heaven to maintain the cosmic balance, it was code for ‘I’m a pamphlet distributing, incense burning, religious weirdo;’ that the gorgeous Seth Wilks would never be her soul mate and that she’d never have to choose between them. Chloe was wrong.

Now the future of the world is in her hands, but what if price is too great to pay? 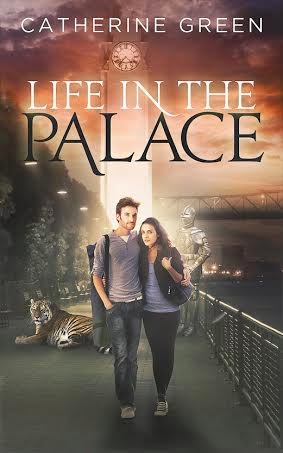 This is a brief description of the plot:

After a lifetime in the shadow of her sister, Chloe is severely phobic of the chronically cool. Seth is everything she avoids; a pre-med philosophy major who works in a bar, plays in a band and is so good looking that grown women stare at him in the street. But it’s hard to say no to your soul mate. Thinking she’s maxed out her supply of destiny, Chloe settles down to enjoy the happily-ever-after.

Tal says that she’s one of The People sent from heaven to maintain the cosmic balance. Chloe assumes this is code for ‘I’m a pamphlet distributing, incense burning, religious weirdo.’ Actually Tal’s main extracurricular activity is fighting the forces of Oblivion. The People never need to hide what they are because no one ever believes them. Until Chloe does.

Chloe sets out to help Tal and The People as much as she can as an outsider. Seth says as long as no one wears their underpants on the outside Chloe can do what she likes. What he doesn’t say is that he’s also one of The People, although non-practicing. But as the Final Battle draws nearer, Chloe realizes it’s time for Seth to go collect his regulation sword. The only thing standing in his way is her. Seth says he’ll give up his place in heaven to stay with her. Chloe must choose between Seth’s soul and her own happiness.

Mrs. Perr stood to see me out, “It was so nice to meet you Chloe. Feel free to stop by again.” Her voice was warm, but I was sure she didn’t mean it.

“Thank you so much for the hospitality. You really saved my life on the bathroom front.”

We were just making our way towards the front door when it opened and through it walked a group of men all wearing suits.

“A lot of people are on vacation so things moved more quickly,” one of the men explained.

“Who’s this?” a youngish guy asked. He might have been the brother-in-law.

“This is Chloe, Tal’s study partner. She just stopped by for few minutes.”

I would have smiled and made my way towards the door if it wasn’t for the fact that I had lost all control over my body. I just stood there and stared. I didn’t even care if by now they thought I was beyond weird.

Tal was introducing me to her brother and acting like everything was normal. I don’t even think I said hello to him. When I did speak I couldn’t even remember to fake politeness.

“What is that?” I didn’t even blink. I just stood and stared. I might have been in shock.

“What’s the problem?” One of Tal’s friends asked the other.

“I think it’s because he’s wearing a hat,” the other replied.

“Who cares about the hat?” The panic was apparent in my voice. I still didn’t take my eyes off them. “Behind him,” I croaked, “Can’t you see them?”

“See who?” Tal’s mother asked casually. She’s a good actor, only her eyes betrayed her.

Tal was less cool, “What’s there to see?”

Sweat was pouring down my back, I was about to totally lose my cool. “The giant creatures of light and fire standing behind him.”

“Ahhh, behind all of you!” I leapt back. I wrapped my arms around myself so they wouldn’t see how my hands were shaking. Now even Mrs. Perr was having trouble playing it cool. We all just looked at each other for five horrible seconds.

“The angels?” I wasn’t sure the voice was my own.

A vein on Tal’s left temple was throbbing. “I did tell you,” she said very quickly. “Angels come to our house on the weekend.”

“You didn’t tell me it was fucking TRUE!!” I exploded.

Then clamped one hand to my mouth as I realized I’d just sworn in front of a bunch of religious people and a swarm of angels. I sank into the sofa behind me. I put my head in my hands, but when I looked up they were still there, radiating eternal light.

Over my head, I felt an exchange of meaningful looks. Someone reached a decision.

For the first time, Mr. Perr spoke, “It’s all true. There really are angels that come to our house, we really live in the Palace, we really defend the world from Oblivion and Disconnection. We are the Servants of He Who Sees All. It’s real.”

“All those stories are true?” I asked.

“Anything anyone missed?” I asked more brightly than the moment called for.

The blond friend put up her hand, “There really is a force in side of us that drives us away from the true path.”

“A bit. Somewhat. Maybe,” she floundered.

“We prefer to think of it as being provided with daily challenges to become greater,” explained Mr. Perr. He’s slick. I wondered if he was a motivational speaker or a divorce lawyer.

They seemed to be waiting for me to say something.

“How come you guys don’t tell anyone about all of this?”

“They just don’t believe us,” the clean cut guy, who I presumed was her brother, explained.

“The angels aren’t a giveaway?”

“Others, people who are not of our kind, can’t usually see them so we tell the whole truth and they don’t believe us.” The brother looked around for encouragement. The others nodded.

“Why can you see them?” The blond friend asked.

They all considered it. There may have been another unseen exchange because Mrs. Perr suddenly smiled brightly and asked, “Would you like to stay for dinner?”

Right then, going home to watch X-files re-runs seemed a little lame, so I stayed.

Praise for Life in the Palace

An interesting take on the paranormal romance genre. …..While other books in the genre have unrealistic buy in to the acceptance of someone from the outside entering a "new world" Life in the Palace handled it from both the main character looking in and the dwellers of the Palace looking out at this person trying to enter their world. …….I am so happy to hear that there are more books in the series! – Yonit on Goodreads

I loved this world that Catherine Green created. I happily lost myself in the life & deep love between Chloe & Seth …..I loved the attention to detail, the fleshing out of the world around them, the obvious growth of all the characters... Even the heartbreaking choices made at the end.
Book two I cannot wait to read! – Ebon Darkmyth on Smashwords

Loved it, great story line, fun characters and after reading it and thinking deeply about the duality of our lives, it made my prayers come alive! – Rebecca Wittenstein on Amazon.com

This book introduces you to a whole host of characters that you want to meet in real life. ….The action keeps you reading, while the budding love between Seth and Chloe makes you breathless. A great read. – Cypora Cohen on Amazon.co.uk 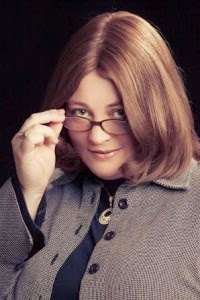 Catherine Green writes fantasy books featuring religious characters in a brazen attempt to make the people in faith communities seem less weird. She lives with her husband, children and three marginally neglected goldfish. When she's not writing, or pretending to be one of her characters on Facebook, she has been known to cook dinner.

Open only to those who can legally enter, receive and use an Amazon.com Gift Code or Paypal Cash. Winning Entry will be verified prior to prize being awarded. No purchase necessary. You must be 18 or older to enter or have your parent enter for you. The winner will be chosen by rafflecopter and announced here as well as emailed and will have 48 hours to respond or a new winner will be chosen. This giveaway is in no way associated with Facebook, Twitter, Rafflecopter or any other entity unless otherwise specified. The number of eligible entries received determines the odds of winning. Giveaway was organized by Kathy from I Am A Reader, Not a Writer and sponsored by the author. VOID WHERE PROHIBITED BY LAW.

This book was in a league of it's own. Some other popular books are referenced but otherwise, it is unique.

That being said, some of it felt a little extremist, what I assume being in a cult would be like. The "people" which are the special ones in this book, refer to humans as others and are not always nice to them. Which strikes me as odd.

The heroine, Chloe and her love interest, Seth, have an insta love. This is a tad annoying but overall, I liked it. :D I thought Seth seemed awesome. However, you know how suspicious I am. Maybe he was just a little too perfect, you know what I mean?

I need to tell you that it ends in a cliffhanger. What a doozie!

There was mystery, reverence, religious exposure, action, romance, some humor, and interesting characters found on the pages of Life In The Palace.

If you are anti religious, do not even attempt to read this as you will not like it. Then again, maybe you should try it. If you are religious, then you'll probably love this one. If you are on the fence with your religious beliefs, try it, what do you have to lose? This book is Free! :-)

I received an ecopy of this book in exchange for my honest opinion. I liked this charming and exciting story. I plan on reading book two, To Call Your Name, which is out now, as soon as I get caught up on all of my other commitments.

Email ThisBlogThis!Share to TwitterShare to FacebookShare to Pinterest
Labels: giveaway, I Am A Reader, review