Spotlight on Severine by Jaden Sinclair

The year is 9045 and the Nations control almost everything in the universe. They have brought order to many planets and cultivated others, but behind closed doors they’ve raided and pillaged the planet’s resources for their own gain. She is one of the many children who have been ripped from their home for their selfish cause. Trained at a young age, she was developed into just what the Nations hoped to accomplish. A perfect weapon. But when control is lost and the weapon goes rogue, the Nations learn firsthand just what they’ve created and just what their weapon will do for her freedom and for a family she can never forget. He is sent to find her. Another trained and burned by the Nations, Byron Suthland is hired to find the weapon, only he doesn’t want to find her for them. He wants to find her for himself and bring back a woman, not a weapon. Knowing she can kill him instantly means nothing, but caring about her means everything.
Severing 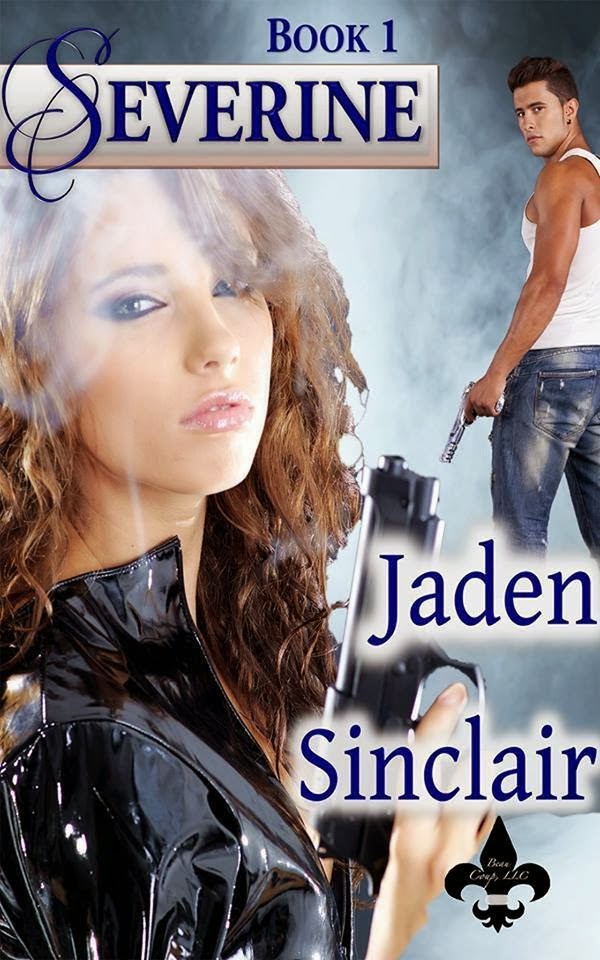 “And where are you going to go?” “Home.” “Do you even know where home is?” “No, but you do and you’re going to be kind enough to give me the information.” “It isn’t that easy.” She lost her temper and walked right up to him, bringing the gun she had tucked behind her right out. He didn’t fight her when she put her hand up to his throat, shoving him back against the wall, her gun now pressed right between his eyes. “What are you going to do, Severine?” Byron asked. “Shoot me?” “If I have to.” “Then what kind of information will you get?” They had a kind of standoff. Both refusing to back down or look away. However, Byron made a move, one she wasn’t expecting. His hand came up slowly, his body didn’t move. With the back of his hand, knuckles only, he touched the side of her face. Severine moved back. “What are you doing?” She frowned at him. “Something I think hasn’t been done to you in a very long time.” “Don’t do that.” His hand went back to her ear and into her hair. “But I want to do this.” When his face began to lower down to hers and both of his hands moved to her waist, Severine changed the position of the gun. She now pressed it up under his chin. “I can shoot you and keep you alive.” His face was mere inches from her own, lips so close she could feel his breath upon her own. “And I think this will be well worth getting shot.” They touched. His lips touched her own gently, softly. She had never been kissed before. The only type of touching she’d been subjected to had always resulted in pain of some kind. Yet this wasn’t painful, but it confused her none the less. He didn’t do much of anything else either. In fact, if she wasn’t mistaken, she thought he was trying to show her how to kiss. Why she let this happen, she couldn’t answer. But Severine did give in mostly due to her curiosity. She wanted to know what this felt like. What it was like to be held by another and not made to suffer for it. However, before anything more could go on, the gun she held under his chin was taken from her hand and the light kissing simply stopped. He pulled back enough to look her once more in the eye, one arm still around her. Keeping eye contact with her, Byron uncocked the gun, let it drop with his finger still on the trigger so it would flip butt first back to her. “I’m not going to hurt you, Severine. Ever. And I will help you find what you need, but not with a gun at my head. Next time, just say please.” She took the gun from his hand, he let her go, and moved around her toward the steps, taking them two at a time up, leaving her right where she stood.

Jaden Sinclair lives in a small town in Kansas with her husband of eighteen years, two boys and a few pets that keep her hopping. Between sports and the animals it’s a wonder at times how she is able to keep the flow of her writing going. But she does. She has many series in the works and out for your enjoyment, and most known for the Shifter series. Between werewolves, vampires, scifi, new worlds or simple romances, one never really knows what will come out next. So to keep up with what she doing, visit her Website, Blog, or email her at jadensinclair@gmail.com. She’ll love to hear from you.

I'm not sure that this book is one that I would enjoy because it does not take place in present day and as you know, I have a problem relating to those usually. I can say that Jaden Sinclair has a Shifter series that I really liked. She has numerous other books in other genres too. :-)