Review ~ Once in a Blue Moon by Vicki Crum

Casey Montgomery’s lifelong addiction to “bad boys” has brought her nothing but heartache. Just as she swears off alpha males forever, a brief, torrid encounter with one of the hottest, Harley-riding, leather-jacketed hunks she’s ever seen leaves her reeling---and worse, jeopardizes her carefully laid plans to meet and fall in love with a nice, dependable nerd.

Jake Benedict has been around the block enough times to recognize his mate when he meets her, a gorgeous werewolf with a case of latent genes who doesn’t have a clue about her true identity. Jake is just the were to teach Casey about her ancient heritage and coax her feral side into revealing itself.

While Casey can’t resist the intense physical attraction she feels for Jake, she’s determined to freeze him out emotionally. Can Jake break through Casey’s defenses and prove to her once and for all that he’s one bad boy who’s playing for keeps? 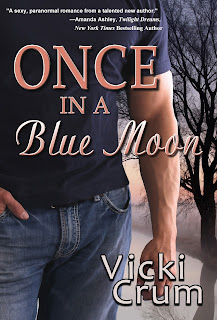 Once in a Blue Moon


Casey Montgomery snapped to attention, her gaze darting toward the street, as the snarling roar of a motorcycle engine ripped through the tranquil morning. There were two things guaranteed to make Casey sit up and pant like a puppy. One was the deep musky scent of well-worn leather, and the other was that sound—the sound of speed and power that had her blood sizzling like hot oil and a wicked vision of vibrant, seductive man shimmering in her brain. It was a conditioned response she didn’t seem to have any control over.


Casey’s gaze latched onto the bike, and the broad, leather-jacketed back of the guy who guided it deftly through traffic as though he and the bike were one. She ached with the need to see him better, to learn something about him…where he’d come from and where he was headed. To climb up behind him and hang on tight, feel the warm wind caressing her face and whipping through her hair.


Heaving her purse into the back of her lime-green VW convertible, Casey slid behind the steering wheel, cranked up the engine, and squealed backwards out of her parking spot. It was fortunate that someone was waiting to pull in behind her, slowing the flow of traffic on the busy downtown Manhattan Beach street.


What madness spurred her to dash in and out of traffic for the next half-mile or so until she was directly behind the motorcycle, pursuing it down the coastal road out of town, she would never know. But pursue it she did, as if every last brain cell she possessed had turned to rot. For as long as Casey could remember, she’d had a weakness for bad boys. Her affliction went beyond mere feminine curiosity, or even a fascination with what some might call the masculine mystique. No, what Casey suffered from was a serious case of throw-your-good-sense-out-the-window-and-jump-right-in syndrome when it came to this particular brand of men.


The stranger sat the bike with the confidence and poise of a man certain of his place in the world. He had an aura around him, something indefinable, some kind of mysterious X factor that filled Casey with a wild, reckless yearning to be near him.


When the road widened, she hit the gas and swung out into the left lane, drawing abreast of him just as a red light up ahead forced them both to slow to a stop. All she wanted was a look at his face. She willed him to turn and look at her, and when he did her breath got all balled up in her chest. His eyes were hidden behind mirrored sunglasses, but what she could make out below the line of his helmet—lean cheeks and a strong, masculine jaw—Casey had to bite her lip against a raw, almost feral surge of attraction.


The light turned green, and he shot Casey a smile as he revved the powerful engine and took off. She was so rattled by the brief encounter, it was all she could do to keep the VW in her own lane as she stomped on the gas pedal and shot forward after him.


Dear Lord, what was happening to her? She’d suffered through enough disastrous relationships with alpha-male types that she’d long since sworn off anyone who could even remotely be classified as a bad boy, a maverick, a renegade. A man whose inbred machismo blinded him to any other needs but his own. Even at her lowest point, she’d never behaved quite this irrationally.


Releasing her death grip on the steering wheel, one shaky hand at a time, Casey dried her sweaty palms off on her skirt. As she did so, she spotted a place to pull off the road in a secluded little turn-out and regroup. With her heart still careening along like an out-of-control bobsled, she steered the tiny convertible over into the right hand lane and off the road.


After bringing the car to a too-sudden stop, Casey turned off the engine and flipped down the sun visor to squint into the small rectangular mirror. Sure enough, her cheeks flamed as bright as a blood-red sunset. What a mortifying turn of events. Dare she hope the man hadn’t observed her chasing him down like a wild beast?


Casey fanned her face with one hand, while taking a surreptitious glance around. She was parked in a shady nook across the road from a popular local beach. The lure of the ocean and the warm Southern California sun had drawn the usual crowd out to enjoy the early summer day. Ripples of laughter could be heard from across the way, mingled with the occasional bark of a dog and the ever-constant roar of the surf tumbling against the shore.


Casey’s pulse rate had almost returned to normal when her stomach leapt at the familiar purr of a fine-tuned Harley coming from over her left shoulder. The powerful machine came to a halt about fifteen feet away in a rolling cloud of loose dirt. Casey wet her lips as she watched the most gorgeous man she had ever laid eyes on swing one denim-clad leg over the leather seat and dismount. Her mouth fell open as he ambled toward her, pulling off his helmet to reveal a healthy head of sable brown hair highlighted by an occasional streak of gold. The streaks in his hair and his deeply tanned skin testified to what she already knew—he was accustomed to spending a lot of time outdoors.


“You all right?” he asked, casually dangling his dark blue helmet from long, lean fingers.


He stood not three feet from her car, hip cocked to the side, tall and solid and so strikingly handsome Casey thought he must be a mirage.


Easy enough to find out, she thought, opening her door and stepping out. She’d come too far. There would be no retreat from this humiliating predicament, so she might as well bluster her way through. She reached up with the intent of removing his sunglasses and quickly found her wrist caught in a firm, yet gentle grip. The sharp sound her breath made as it got stuck in her throat echoed loud in the silence.


“I just wanted to see your eyes,” she said, her voice nothing more than a faint puff of air.


One dark eyebrow rose above the thin metal rim of his shades. “Yeah? I was wondering why you nearly ran yourself off the road back there.” He punctuated his teasing comment with a deliciously sexy grin.


Who cared about his eyes? That smile was enough to turn her insides to pureed squash. That and the aroma of leather that jumped out and blind-sided her as he moved in close. Leather and something even more feral. Whatever it was invaded her bloodstream and set every cell in her body on fire.


He let go of her wrist to cup the side of her face. Casey was ridiculously touched by his


gentleness even as her desire to be as close as humanly possible to this man raged out of control.


His need suddenly seemed to rear up and collide with hers. Yanking her into his arms, he


pressed close, close enough that she could see every minuscule line and tiny freckle on his face.


Then his mouth crashed down over hers.

Vicki Crum writes both contemporary and paranormal romance. She lives with her husband of 40 years in a small, enchanted seaside community in Southern California. She has two grown daughters and two adorable grandchildren, Bella and Jackson, whom she loves to distraction. Vicki loves to talk to her readers.

I liked everything about this one! It started with a chase and was pretty quickly paced through out.

Casey, the heroine, was a breed of her own in a way. She had always been fascinated with bad boys.

Jake is in town to help Reed, Casey's brother. They had been friends in college so he was happy to help when asked.

Casey and Jake have a very intense and instant attraction. ;-) She is embarrassed by her actions and tries to steer clear. He is determined to get her and goes out of his way to prove that he is not so bad.

Needless to say this is a paranormal romance. There are werewolves, romance, plenty of sexy scenes, a wet disaster, some danger, two girls fighting, a protective brother, and more. What else could you ask for?

The characters were great. There was only one I disliked and I was meant to dislike her. The author did an excellent job of making that happen!

Jake was strong, caring, kind, generous of his money, time, and talent. He tried to be patient when she needed it even though it wasn't easy for him to do it.

I love that there were different types of were in this book. I hope to read more about these weres.

I really liked Once In A Blue Moon! I received an ecopy in exchange for my honest opinion.

If you like paranormal romance, get this book ASAP. You will like it. I really did! :D