What’s On Your Writing Playlist?

Spotify is my best friend when it comes to finding music to write by. This wonderful service lets me find music I like and points me toward music I might like. It lets me create playlists and find playlists from others. Why is all this important? Because I need music to help me block out the real world so I can tell my tales.

I have three playlists on Spotify right now that I use for writing. The first is the oldest and likely one of the strangest playlists I’ve ever created. The playlist is called (with tongue firmly in cheek) “Twilight’s Redemption.” The music comes from, or is inspired by the Twilight films. It begins with “The Lion Fell In Love With the Lamb” and meanders through the instrumentals from the films and instrumental versions of the soundtrack songs. This soundtrack works especially well for the Highland Home books and romances as it is light and romantic.

The second is the soundtrack from “Practical Magic.” I love the songs on this soundtrack as they are both angsty and romantic, themes I often use in my writing. Also, I adore Stevie Nicks and the instrumental backgrounds of the songs.

The third playlist is the newest and is definitely for the darker writing I have been working on lately. This playlist is the score from The Dark Knight Rises. Hans Zimmer is an amazing composer and the music from this epic film is deep and resonates with the darkness I think every writer has buried within him or herself.

If you find music to be in integral part of your writing process, as I do, you might want to check out Spotify. Maybe if enough writers get together on the service, we can start a “writing playlist” group! 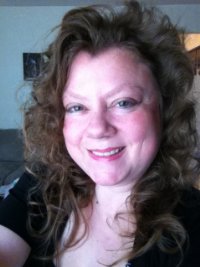 Shari Richardson holds a master's degree in English Education and has spent much of her life teaching students the joy of reading and writing. Her love of writing began when she was in elementary school and has carried through her entire adult life. Shari lives in Pennsylvania with her two Chihuahuas. 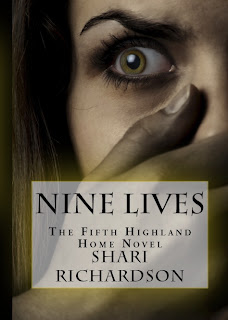 When in the midst of the usual supernatural uproar which surrounds her, Kerry Cote finds herself pregnant, she thinks the worst has finally come. But when her fiancé doubts her love and her child while the supernatural world lays itself at her feet, Kerry knows she must be strong. Nine Lives takes readers through Kerry’s pregnancy and an epic battle among vampires to bring them out on the other side with the birth of her child.

Here's an excerpt to whet your appetite!

"Oh my God," Mairin exclaimed. "I look like a frosted cupcake."

I poked my head around the doorway of my sister's bedroom and burst out laughing. My normally tom-boyish sister looked like someone had airbrushed a Vogue model over her. I could still see Mairin under the makeup, hair and the far too flouncy sparkling white gown, but I had to squint.

I held up my hands. "Hey, don't blame me for this one, sis. This is all you. You let Mom go to the bridal shop with you and Mathias' credit card. You knew she was going to pick something like this."

Truthfully, the gown was gorgeous. It had an empire waist and a very short train, but it also had so much lace and so many sparkles, I was surprised my sister wasn't currently shredding the gown in an effort to get it off.

"Dammit, dammit, dammit. I cannot do this," she said. "Nope. I won't. I should have insisted on the stupid town hall and the stupid civil union, but no, I let Mom and Mathias bully me into this." She waved at herself.

"Mairin," my mother said, slipping past me into my sister's room. "You look so beautiful. I knew that dress would be gorgeous on you once the alterations were finished."

I smiled at my sister over our mother's shoulder and bolted for my room. The glare which followed my retreat nearly burned. Mairin would complain, but I knew she'd never have taken anything away from our mother. Especially not something as important as a big wedding with all the trimmings.

Of course, her willingness to be on display for the town in a gown that was anything but her own choice was really my sister in a nutshell. No matter what it did to her, if it meant one of us was happier, Mairin would do it. Take my bridesmaid dress. The wedding planner Mathias hired to help Mairin keep her sanity had freaked out when Mairin showed her the dress, but my sister had insisted that the pale colors the wedding planner wanted would look awful on me. So instead of joining the frosted cupcake brigade, I was wearing the deep, forest green, knee-length dress my sister had chosen for me. She could have picked some hideous, flowing monstrosity so I wouldn't overshadow her, but had instead picked the dress she knew I'd like.

I was pulling the dress over my head when the doorbell rang.

"I'll get it," Tawnya called from downstairs. I knew she'd been ready for us to leave for the wedding for at least half an hour, but after the tenuous truce she and Mairin had finally formed after their estrangement last winter, Tawnya was keeping her opinions to herself. I, on the other hand, wasn't. If they weren't ready by the time I got my shoes on, I'd shove Mairin down the stairs.

"Hey Tawnya. The other camp is getting anxious and sent me to see what was keeping the bride." Xavier's voice drifted up the stairs to me and I smiled. In spite of some pretty big disagreements they'd had in the past, Mathias had asked Xavier to be his best man. Xavier, always looking for ways to improve the political climate of the supernatural community, and because both Mairin and I had begged him, had accepted. It hadn't been until the tuxedo fitting that he'd truly begun to regret saying yes. The complaints over the fittings had been epic and amusing as hell.

I slipped on my sandals and ran back to Mairin's room. "The natives are getting restless. We have to go."

"I heard him," Mairin said. "Mom, go get in the car with Tawnya. Kerry can help me down the stairs in this monstrosity...um, dress."

Mom kissed us both before heading down to meet up with Tawnya. I could see her eyes were already beginning to shine with tears and knew that before the end of the ceremony, our mother would be a blubbering mess.

"Probably. You're her baby and you're getting married."

"Yeah, wait until it's your turn, brat." Mairin clasped a thin gold chain around her neck and sighed. "That's it. No more delays."

"Don't you want to marry Mathias?" I asked.

"Sure I do," she said. "But for all intents and purposes, I'm nineteen. Girls don't get married this young unless they have to. You know most of the town is going to be watching me to see if I'm pregnant."

"That's why you and Mathias are going on a long honeymoon. So you don't have to worry about being watched." I held Mairin's arm as we carefully navigated the stairs. "Besides, admit it. You're dying to see all the snooty jerks jockeying for position to catch your bouquet."

Mairin laughed. "I'll aim for you, if you want me to."

Xavier looked up at me from the foot of the stairs. I knew he'd heard Mairin and my heart thundered in my chest. He'd already asked me to marry him more than once and I'd told him no. Not no forever, but no for right then. Looking at him in his tuxedo, the tiny, shy smile I loved best lifting just the corners of him mouth, I realized while I still might not want to get married tomorrow, I was ready to say yes to him.

Sound good? Be sure to check out the rest of this series if you haven't already.

I actually read all of the books and for the most part I really like this series. It is like Twilight meets Sookie. Those are two of my favorite series so it's no wonder that I like the Highland Home series.

Many scenes reminded me of Twilight but it was different enough to be enjoyable rather than annoying.

This series has vamps, weres, witches, demigods, gods, and angels.

This series starts when Mairin, a human dreams about Mathias, a vampire. Each book can stand alone but I think it is easier to understand the actions and interactions of the characters if you read the books in order. Trouble seems to find Mairin and her sister Kerry. Each book is about a new problem. All of the books focus on Mairin and Mathias except for books three and five which focus on Kerry and Xavier.

If you like paranormal books, you should definitely check this series out! Book one is Mourning Sun.

Now let me tell you about Nine Lives. It is the fifth book in the Highland Home series. This story is mostly about Xavier and Kerry. They start out very much in love and then someone from his past comes between them. The mystery girl is not what she seems and things get out of hand.

I received a copy of these books in exchange for my honest opinion.

*Disclosure of Material Connection: I am a member of Reading Addiction Blog Tours and a copy of this book was provided to me by the author. Although payment may have been received by Reading Addiction Blog Tours, no payment was received by me in exchange for this review. There was no obligation to write a positive review. All opinions expressed are entirely my own and may not necessarily agree with those of the author, publisher, publicist, or readers of this review. This disclosure is in accordance with the Federal Trade Commision’s 16 CFR, Part 255, Guides Concerning Use of Endorcements and Testimonials in Advertising*

Fill out the Rafflecopter for your chance to win!


I'd love to know what you're thinking. Please leave a comment!
Posted by Brenda Demko at 12:30 AM