Here are a few of the AUTHOR’S FAVORITE QUOTES FROM LIAR, LIAR HEARTS ON FIRE

My dating experience might have been sporadic—the seasonal flu came with more regularity than I did—but I was a woman and knew the signs. For one man. But with twins, it was like being hit over the head with a cartoon anvil. They could have been speaking Swahili and I would have understood their intentions. - Violet

Jennifer: Violet is thinking about Jean-Luc and Marc, Mike's polyamorous French relatives who are interested in her. It shows how attraction is the same all over the world.

“They need to sniff around someone else.”

Sniff? Seriously? “I don't think they understand what you just said.”

He looked down at me, eyes sharp. Intense. “Fine. Then I'll speak in a language they're sure to understand.”

The hand at my nape pulled me up onto my tiptoes as he lowered his mouth to mine. He kissed me. Not a simple peck on the cheek, but a 'get a room' kiss that left no doubt in either Jean-Luc or Marc's mind—or mine—Mike's meaning.

Jennifer: Mike and Violet talking about Jean-Luc and Marc. Like the quote before, this also shows that you don't need words to make a point. It also is the first glimpse of Mike's possessiveness toward Violet. 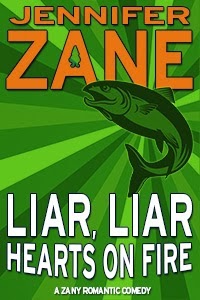 Violet Miller is a teacher savoring her summer break until she's been called in as emergency reinforcements—of the dating kind. She volunteers to help an old flame by pretending to be his girlfriend. In Alaska. At a family reunion. Since the guy is a handsome, lumberjack-sized doctor she's never quite forgotten, faking a relationship won't be hard work.

Mike Ostranski is a desperate man on vacation. His mother wants grandchildren and sees a crazy Alaskan woman as a candidate for daughter-in-law. Mike needs Violet by his side to deflect the lady's advances.

A week in Alaska as boyfriend and girlfriend should be easy for them. They grew up together, even had a brief fling. What could go wrong?

For a guy so big, he was an incredibly good dancer. My brain was fighting a losing battle. He moved us both to the deep throbbing of the music, his palms holding me against him, his fingers resting on the upper swell of my ass. I wasn't going anywhere. Knowing that, I gave over and my brain let go. For the moment, I was his and he was making it very well known to anyone watching.

One song in, I didn't think I was going to make it. My morals were being sorely tried by the liquor and Mike's dominating grip on me. Sweat pricked my skin, I knew my cheeks were flushed and heated. There was no doubt he could feel the hard tips of my nipples pressed against him. I'd become scorchingly aroused and when I felt vibrations right...there—

I moved against him and it happened again. Felt the sensation zip through me from head to toe. My heart pounded and a soft moan escaped my lips. Mike leaned down, his breath hot on my ear, his lips lingering there. Did he know such a little spot could drive me crazy?

“Like that?” His voice was low so only I could hear. Dark.

I nodded my head shamelessly. He shifted me back a few inches, reached into his jeans pocket.

He pulled out his cell and smirked.

Oh, God. I was officially a hussy.

Jennifer Zane has lived all over the country--from Georgia to Maryland, New York to Colorado, including an exciting five years in Montana. Her time in Big Sky country was the basis for this book. When she's not writing, she savors the insanity of raising two boys, is figuring out how many meals she can make with a pressure cooker, and teaches a pretty mean karate class. She currently lives with her family in Colorado.


This giveaway is sponsored by the author.