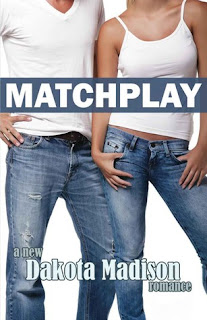 A Girl, a Guy, a Tournament and a Challenge

The Girl: At a time when most girls obsess about homecoming and high school prom, Rainy Dey spent her senior year caring for her dying mother. So when her father drops her off at college to start her freshman year, his words of advice to his bookish daughter are to start acting like a young person and finally have some fun.

The Guy: College senior, Aaron Donavan, aka Mr. Hot-and-Knows-It, is President of the Clubhouse, a social club for the college’s most wealthy and popular guys. Aaron can have any girl on campus except the one who challenges and excites him the most—Rainy Dey.

The Tournament: Every year, the senior members of The Clubhouse engage in a golf-inspired tournament to see who can sleep with the most freshman girls. When Rainy finds out about the tournament, she believes Aaron’s only interest in her is to score points by taking her V-Card.

The Challenge: Can Aaron convince Rainy that his feelings for her are true and that she won’t be just another notch on his tournament scorecard?

Dakota Madison has been writing since she learned to read and fell in love with books. When she's not at her computer creating spicy new romances, Dakota is traveling to exotic locales or spending time with her husband and their bloodhounds.

After class on Thursday, Aaron was waiting outside the building for me. He was wearing a sly grin on his face.

“What’s up?” I said as I approached him.

“Let’s get to the library. I’m stoked about picking an artist for our final project.”

I furrowed a brow only half believing his claim. “You’re actually getting excited about the project?”

“Come on,” he said and headed toward the library. I shrugged and followed.

“So what about Andy Warhol,” Aaron said as he held up a small reproduction of a Warhol self-portrait. “He’s definitely got the wow factor. It’s cool that he was a visual artist but was also into making films and music.”

“I like Andy Warhol but there’s already an Andy Warhol Museum in Pittsburg, Pennsylvania,” I said. “Who else did you come up with?”

I stifled a laugh. “Vagina flowers? Really? That’s what you got from looking at her work?”

I quickly scanned through our text book until I got to a photo of one of her ram’s head paintings. I held it up. “You think this one looks like a vagina?”

Aaron considered the work. “Well, maybe not that one. But there are plenty of others.”

Aaron crossed his arms over his chest. “Well, I’ve come up with two ideas. I’d like to hear some ideas from you.”

I gulped. I wasn’t sure if he’d like my idea, or if he’d even know much about her, but she was one of my favorite artists. Before I could even speak, Aaron held up a finger.

“Wait. Let me guess who you’re going to select.”

I narrowed my eyes and stared at him. He wasn’t the only one, who enjoyed a challenge. “Is this a bet?”

I didn’t think there was any way he would be able to guess my first choice artist. She certainly wasn’t as familiar as Georgia O’Keeffe or as famous as Andy Warhol. “What do I win if you don’t guess correctly?” I said.

“But I will,” he said confidently. “And when I win the bet, I want you to go out to dinner with me tonight.”

I gulped. I didn’t think there was any way he could win but what if he did? The thought of going out with him scared the hell out of me. “Okay,” I said finally. “And if I win, I want you to tell me about The Tournament.”

Now he was the one who gulped. A look of panic crossed his face and just as quickly he covered it up with his Mr. Calm and Collected façade. “What Tournament?’ he said.

I gave one sharp laugh. “Oh, please. Don’t play dumb. I know about the game you guys in The Clubhouse are playing.”

His face turned serious. He leaned in close to me and whispered through clenched teeth. “I’m not sure what you think you know but I’m sure you’re wrong.”

I rolled my eyes. “So you’re not trying to get into my pants so you can score points. I hear virgins are worth a lot these days.” As soon as the words came out of my mouth, I immediately regretted saying them.

Aaron looked into my eyes with such intensity, I thought I could burn up in the heat of his gaze. I swallowed hard because I knew I was in trouble.

“I would never do something like that to you—ever.”

I looked into his eyes with what I hoped was equal intensity. “But you would do it to other girls?”

His nonresponse to my question seemed to be the answer.

I slammed my book shut. “I think we’ve done enough on the project for today.”

When I rose to leave, Aaron hopped right up with me. “I don’t.”

“You don’t what?” I challenged.

I sighed. “What do you want from me, Aaron?”

My breath caught. “What?”

“The artist you selected is Mary Cassatt.”

He met my gaze with pure desire in his eyes. Shivers ran through my entire body. “How did you know that?” I barely managed to squeak out.

“Because I know you,” he said simply.

I shook my head. It didn’t make any sense. How could he have possibly known? How could he know me that well in just a few short weeks? The idea that there was some deeper connection between us chilled me to the core. I slumped back down into my chair. Aaron sat back down, too, but he didn’t take his eyes off of me.

“I knew as soon as I saw her paintings,” he said. “The girls she paints, especially the ones in the big hats. They look just like you.”

“They do not,” I protested.

He continued to stare at me. “I think you look most like Ellen Mary Cassatt with a Large Bow in her Hair.”

I could no longer contain a grin. “You seem to have done quite a bit of research on Mary Cassatt’s work.”

“And you seem to have lost a bet,” he said and grinned.

I still wasn’t sure what to make of Aaron. I didn’t like the answers he gave me about The Tournament but he seemed to be so sincere about his feelings towards me. How could he be both a womanizing asshole, and a guy, who seemed to truly care about me at the same time?

What do you think so far?