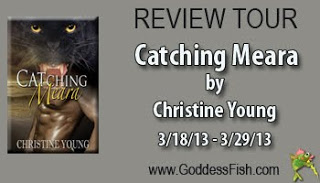 Meara Thorton was a feisty, world class computer hacker—cornered by the FBI and shockingly given the chance to be their newly acquired technical analyst. Brilliant and intuitive, yet aching with the loss of everyone she has cared about, her restless heart led her to discover a love she fought and a world she didn't know could possibly exist.

Jace McKenna was an enigma, a loner, impossibly handsome, sincere and committed. The Apache shapeshifter blood running through his veins burned hotter than the blistering Sierra Madre sun. Jace knew the moment he caught Meara's scent she was his for eternity.

"I'm afraid that cat will show up again. Any suggestions? Any besides keep all the doors and windows closed?" Like a drill sergeant, she marched through his open front door.

She didn't hear footsteps behind her, but she did hear the door close. He was always as silent as cat stalking a mouse. She didn't sense his presence until his hands were on her and he was spinning her around. Surprised, she cried out. The spinning sensations caused her to stumble. She fell down to the floor and he followed.

She was beneath him and he was sprawled over her, taut, tense, his chest naked and the muscles rippling. She wanted to trace the rosettes on his body. They were everywhere and she'd never noticed how many he had. His eyes seemed to blaze, searing, into her. "Meara," he began. "Dear god, Meara." Then he fell silent. He groaned as his fingers moved into her hair...and he was kissing her...really kissing her.

Not as he had kissed her earlier. Not lightly, but with hunger, raw and animalistic. Openmouthed, his lips moved upon hers, wet, hot, enticing a response from her. His tongue swept her mouth, thrust inside and demanded she respond equally. Then he drew away, kissing her face, the tip of her nose, her closed eyelids. His tongue rimmed her lips before slipping inside her mouth again, so deeply the inferno raced throughout her body. She needed to touch him if only to reassure herself this too was not a dream.

She wanted to feel the warmth of his body and explore the contours that were all male animal, sleek and hard. And in turn she felt an overwhelming urge, the fire, and the desperation to have him at any cost.

His lips rose above hers just a fraction of an inch. She touched them delicately with her tongue, encircling them, nipping lightly. He held still to her gentle assault then swept his arms around her. Once again their mouth melded and the tasting and sweeping and hunger were shared. When they broke apart again, his hold on her eased, but the tension in him seemed greater, explosive. His breath fanning her cheeks, he whispered. "Meara, I'm sorry. I understand it's too soon. It's just..."

Beneath him she lay still, wondering what on earth was happening to her. It wasn't too soon. Yet maybe he had the right of it. Perhaps he didn't want her in that way. She had teased and taunted him, shown up at his door and practically begged for the kiss--for sex. Still she wondered how he could just walk away. It seemed to him the kiss was a mistake, but she'd live with the mistake and cherish the moment.

He was on his feet, one hand holding tight to his towel, the other reaching down to her, helping her to stand. She gazed at him, her fingers still entwined with his, her lips swollen and soft and wet from the kiss.

"Jace," she whispered his name. He didn't speak, and his eyes focused with hers. "I'm not what you want. I know I'm not the kind of girl..." Her voice trailed away miserably. She barely knew him, and she had imposed herself after long days at work. But she wondered if his desire was great enough, if she could seduce him.

"Meara, hush, you are exactly the kind of girl I would want." His voice was a low growl, his words fraught with tension, his eyes blazing. 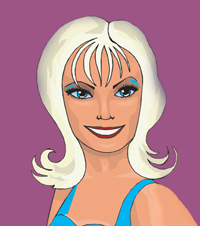 Born in Medford, Oregon, novelist Christine Young has lived in Oregon all of her life. After graduating from Oregon State University with a BS in science, she spent another year at Southern Oregon State University working on her teaching certificate, and a few years later received her Master's degree in secondary education and counseling. Now the long, hot days of summer provide the perfect setting for creating romance. She sold her first book, Dakota's Bride, the summer of 1998 and her second book, My Angel to Kensington. Her teaching and writing careers have intertwined with raising three children. Christine's newest venture is the creation of Rogue Phoenix Press. Christine is the founder, editor and co-owner with her husband. They live in Salem, Oregon.

Find her on her Blog.


***Christine will be awarding a $15.00 Amazon Gift Card to a randomly drawn commenter during the tour.***

This book is for adults only! I thought the story started out with a zinger but seemed to go at a slow pace though. Maybe it was just me?

It got more exciting pretty quickly and held that pace until the end. This book had action, romance, danger, some mystery, a hunky shapeshifter named Jace, and some steamy scenes. ;-)

Meara is a great hacker and one day a group of men come and take her away. She is offered a chance to work for them or she's going to jail.

One of the men who take her away is Jace and he really gets her motor running! They start to have a relationship and danger is everywhere. Jace struggles with telling her about being a shapeshifter. Which is funny because she already has it figured out. :D
While all of that is going on there is a stalker after Meara. Not a dull moment to be had!

I received a copy of this book in exchange for my honest opinion. I was honestly thought it was a hot paranormal read!

Do you like big cats? If so, what is your favorite?

I'd love to know what you're thinking. Please leave a comment!
Posted by Brenda Demko at 12:30 AM