Review ~ The Werewolf Prince and I by Marian Tee 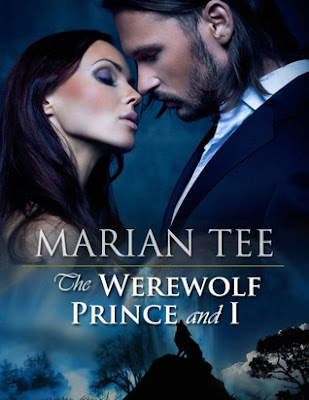 Broke, nerdy, and self-confessed wimp Misty Wall leads a ho-hum life as a Grammar Nazi intern, which of course earns her feelings of hate-at-first-sight from her colleagues at Ze Morgue, a.ka. Moretti Inc.'s Administration Department.

Misty has always wished for something exciting to spice up her boring-with-a-capital-B existence, but she never thought it would come in the form of a gorgeous six-foot-plus billionaire. The world knows him as Domenico Moretti, the ruthless, cunning, and aloof CEO of Moretti, Inc, a.k.a. her boss.

Gifts of (mis)fortune come in threes, they say, and it’s certainly the case with Misty, whose life is turned upside-down by Domenico Moretti’s three shocking revelations.

Two, he wants her in his bed – him, the guy who actually had to file a TRO against an obsessive supermodel.

And three, he has a proposition she never – and she means never – ever sees coming.

Add it to your Goodreads shelf.

I've had my eye on this one for awhile. I finally got tired of waiting to see if it would come out in print. I'm glad I decided not to wait. :-)

I'm counting this review toward the paranormal reading challenge for this month. It was primarily about werewolves but it had a fairy in it as well. :-) I believe the next book in the series will deal more with the faeries.

Misty is a wall flower that has trouble fitting in. She is shy but has a great attitude and is always willing to help others. She tries to be friendly but others are always being mean to her.

One day her boss tells her that Mr. Moretti wants to see her immediately. She thinks that she is going to be fired because that is usually the reason people are called to that floor, although there are also rumours that other more steamy things happen there. She cannot see the latter being possible where she is concerned.

Domenico Moretti is a handsome, egotistical, workaholic, prince of the werewolves. He was hurt by a circumstance and the words that were spoken after it. The hurt has ruled his decisions since then. He keeps plotting ways to hurt the person as much as he was hurt.

Unfortunately Misty ends up being a pawn in his game. He tells her that he needs her to be his wife. He is quite resourceful in convincing her.

He does fall in love with her and then everything comes back to kick him in the butt. He deserves to be hurt bad.

I really liked this book for the most part. There were minor things that grated on my nerves but overall I thought it was very engaging. I was drawn in from the beginning and couldn't put it down until it was over. I can not wait to see what happens in the next book!!!!

The plot had a sneaky plotting werewolf with no regard to anyone's feelings but his own, a naive human woman, twists and turns, love, and heartbreak, betrayal, rogues that are killing their own species, vampires, a fairy, some action, and romance.

I wanted to like Domenico but as Alpha wolves go, he really doesn't get the concept of taking care of his chosen mate. He was mean sometimes. Don't get me wrong, he didn't hit her or anything. He was nice and seemingly caring and then he'd walk right past her. He sent her into a building full of werewolves including an ex lover and didn't even give her a hint that there may be problems. He is kind of a jerk. Toward the end he was getting so much better then his secrets came out in the most embarrassing way and poor Misty was devastated. Since I really liked Misty's character I was angry with Domenico when his secrets came out. I was also embarrassed for Misty. The way she found out was just awful. She then doubted him and was very hurt. I felt that as well. There were also happy moments in the book. It was a well rounded emotional trip.

I really really liked that there is a sneak peak into the next book at the end of this book. Otherwise I would have said it was a cliffhanger.

I recommend this book to those of you who like werewolves, or paranormal books in general. This one is different. I thought it was a great (mostly) new start to a new werewolf series. I will definitely be reading the next book!


Do you like when the hero in a book has an attitude or do you like all of your heroes to be the same?

Thank you for commenting! Don't forget to enter the Comment Incentive Giveaway. The link can be found at the top of the page!
Posted by Brenda Demko at 11:42 PM